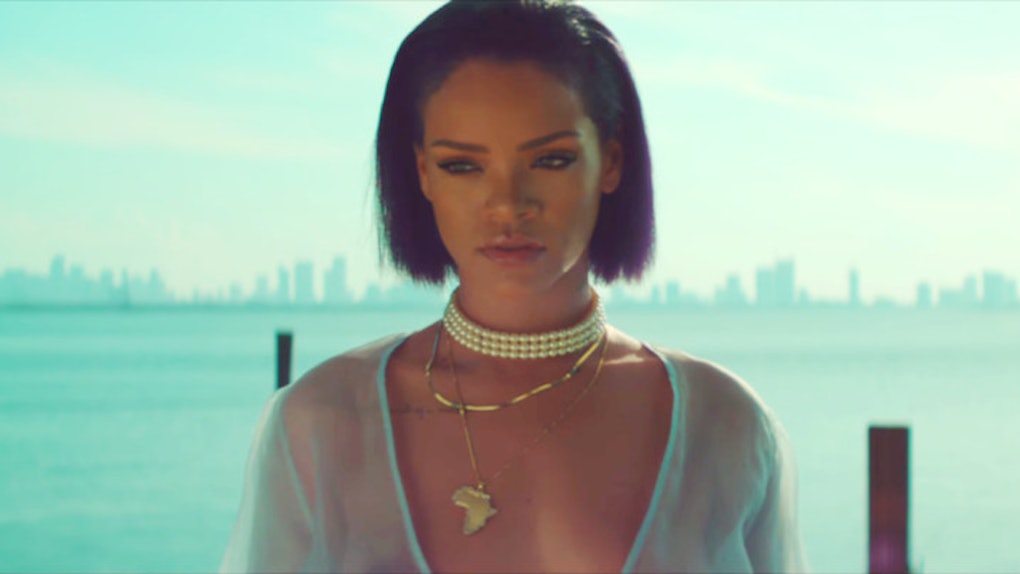 Photos of Rihanna on the set of a new movie have been spreading like wildfire on social media.

No one really knew what the 28-year-old singer was up to -- until now! It turns out Rihanna was actually cast by French director Luc Besson for the upcoming film titled "Valerian and the City of a Thousand Planets."

That's right, Rihanna will be appearing in another sci-fi film. While the photos of her walking around flaunting her beauty on set are awesome and all, people just want to see her in action. Can you blame them?!

Here's a teaser of Rihanna's character in the upcoming film "Valerian and the City of a Thousand Planets."

Director Luc Besson spoke to Entertainment Weekly about what inspired him to cast Rihanna, revealing,

Rihanna was my first wish. First, because of her voice and the way she smiles and looks and how she expresses herself. Second, because you know she won't be intimidated on the set. She plays stadiums with 100,000 people. You know that girl isn't shy about the camera and the crew and all this.

He is not wrong! I'm actually starting to think Rihanna should release some more music before focusing on her acting skills. Who wouldn't want Rihanna gracing the silver screen when she isn't blaring through your earbuds?!

Let's face it, you can NEVER get enough of Rihanna. I think that goes without saying.

The award-winning singer will be joined by stars Dane DeHaan as Valérian and Cara Delevingne as Laureline. The name for Rihanna's character has yet to be released.

While the new teaser for her character the upcoming film is incredibly short, Teen Vogue reports that the official movie trailer will be released on November 10.

Citations: First Look of Rihanna on Set of 'Valerian and the City of a Thousand Planets' (Teen Vogue)