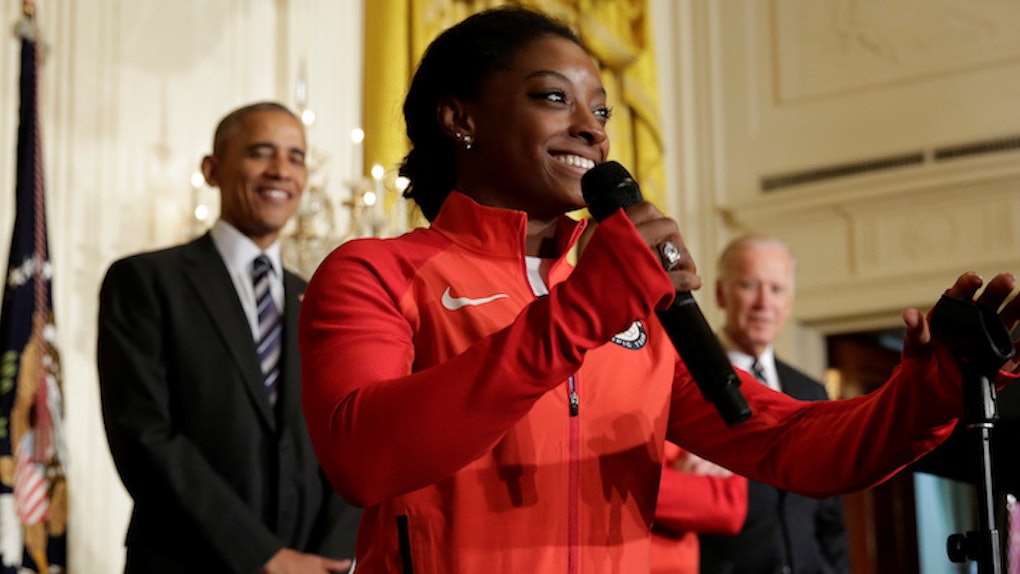 The White House was swarming with US Olympians and Paralympians on Thursday for a special ceremony to honor their achievements at the Rio Olympics this summer.

Yup, our beloved Final Five were there too, and they had the time of their lives.

Simone Biles, Laurie Hernandez, Aly Raisman and Madison Kocian even got a chance to do splits with President Obama in the East Room at the White House. Gabby Douglas missed out on the insane photo op with her fellow gymnasts because she is still recovering from getting her wisdom teeth removed.

Not many people can say they've done splits with the President.

OK, Obama obviously needs to work on his just a little more, but I'm impressed with his effort. That's not easy to pull off in a suit!

This picture is so adorable, I may just want to frame it and put it on my desk. Is that super weird? I don't care.

During the ceremony, Biles presented the Obamas with a giant surfboard that had been signed by the members of Team USA. I don't know if the Obama family is big into surfing, but that's a pretty sweet board.

President Obama remarked, “I was going to do a floor routine with Simone on my way out, but it was so crowded and I can't touch my toes, so we scrapped that idea.”

But I think Obama needs to give himself a litte more credit...

Because he's actually pretty athletic. Look at those limber stretches!

He has obviously been preparing for this picture perfect moment with the Final Five gymnasts.

Apparently the White House happens to be a solid place for stretching and aerobic activity. Who knew?

Citations: Fit to be President! Obama attempts the SPLITS as he and Michelle joke around with Olympic heroes during White House ceremony for Rio team... (but shamed swimmer Ryan Lochte is BANNED) (MailOnline)