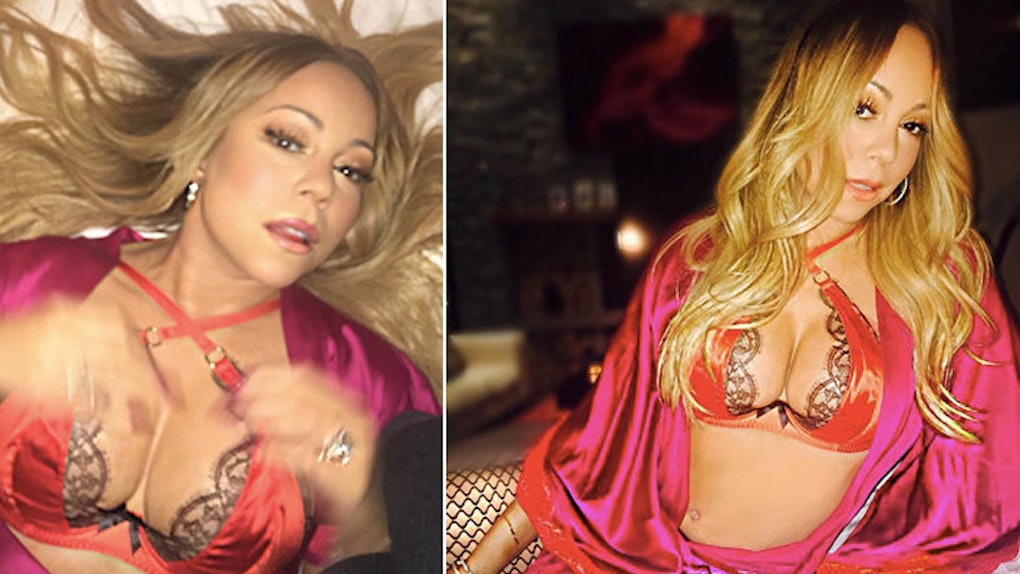 People are really angry with Mariah Carey for the latest pictures she posted on Instagram.

I'm gonna take a guess and say she's losing followers by the second. FANS ARE NOT HAPPY.

I still follow Mariah because she's my hero (haha, get it?) and because I think everyone is overexaggerating and needs to take a chill pill.

The 46-year-old singer uploaded some sexy pics of her rocking red lingerie while on vacation in Greece.

It's unclear who's taking the pics, but that's not important. What's important is Mariah is on a bed, staring seductively at the camera and wearing lingerie I wish I could afford.

What's important is SHE LOOKS HOTTTTTTT. This is like a NSFW version of the "Little Red Riding Hood." Don't show your kids, they ain't ready for this yet.

She also added this blurry pic, but whatever, it's still sexy AF. Killin' it, Mimi. Goddamn.

The reaction of fans seems split. People are either super into them or think the photos are inappropriate.

A few users even slut-shamed Mariah and told her she's too old to be posting such provocative images.

This isn't the first time Mariah has been slammed for her Instagram pictures. Just last week, she was roasted for posting naked pictures of her taking a bubble bath.

OMG, MARIAH IS TAKING A BATH. THE HORROR! CALL THE POLICE. ALERT THE MEDIA. SHUT DOWN THE ENTIRE PLANET.

Want my opinion? Eh, you probably don't, but I'm gonna give it anyway.

I think Mariah looks hot and can do whatever the fuck she wants. TAKE A BATH. WEAR LINGERIE. EAT A PINEAPPLE FOR GOD'S SAKE.

If I could go on a vacation and live a life this glamorous, I'd be one happy camper.

Mariah, I'm with you girl. Now get to the woods before the big bad wolf eats your grandmother.