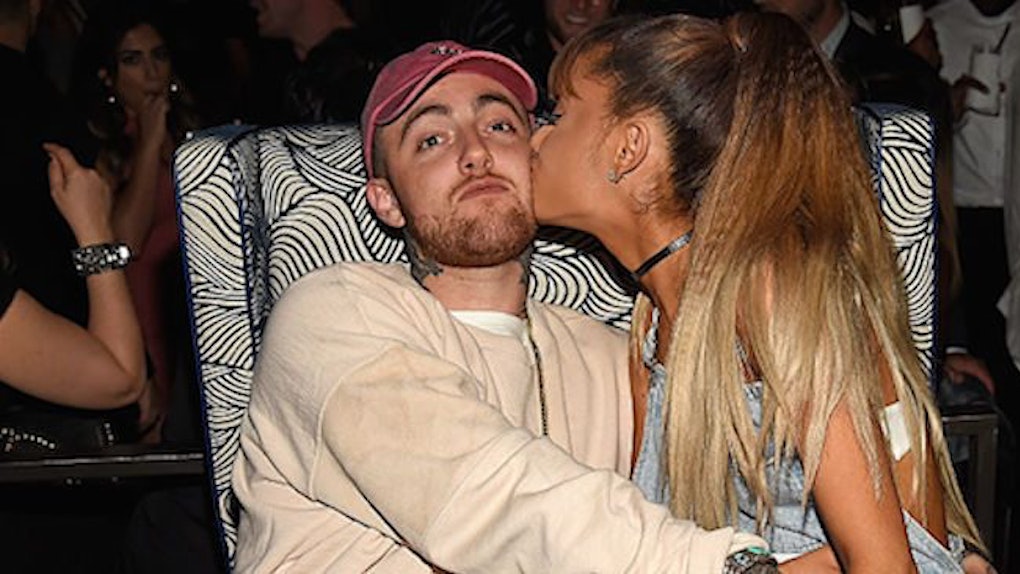 Why Isn't Mac Miller At The VMAs? Ariana Grande's Boyfriend Was MIA

The 2017 VMAs are happening on Sunday night, which means you should be doing nothing but sitting on your comfy couch with a big bowl of popcorn and tuning in to MTV as we speak. The deep anticipation leading up to this star-studded affair has been seriously unreal. Let's take a hot sec and talk about some of the celebs who've made appearances at the VMAs thus far this evening. Ariana Grande posted an Instagram earlier, with the caption, "Last year @vmas Happy #VMAs Day everyonnneee! We so wish we could be there with y'all and are so so thankful for the nominations @mtv. @brilovelife @iamskot and I are sending all our love !!!" Fans everywhere will seriously miss the talented star tonight, that's for sure. Grande is nominated for Artist of the Year, along with Bruno Mars, Kendrick Lamar, Ed Sheeran, The Weeknd, and Lorde. We don't know for sure, but since Grande will not be gracing the VMAs with her amazingness, it's doubtable we'll be seeing her boyfriend Mac Miller at the VMAs.

We all know Ariana Grande and Mac Miller are the epitome of the most adorable celebrity couple ever... and their pictures together truly back up that statement. Cue all the feels. Miller was right by his girlfriend's side ready to greet her with a warm hug when she stepped off the plane following the tragic Manchester Arena attack. He also performed with Grande at her Manchester benefit concert, One Love Manchester. Fans everywhere were completely in awe over Miller's heartwarming support for Grande, and not to mention, they fell head over heels in love with the couple's performance.

Even though this beloved couple isn't at the VMAs together, it's pretty clear Miller is literally the best and most supportive boyfriend in the history of boyfriends. Am I right or am I right? You keep doing you and providing us with ultimate #CoupleGoals, Ariana Grande and Mac Miller.