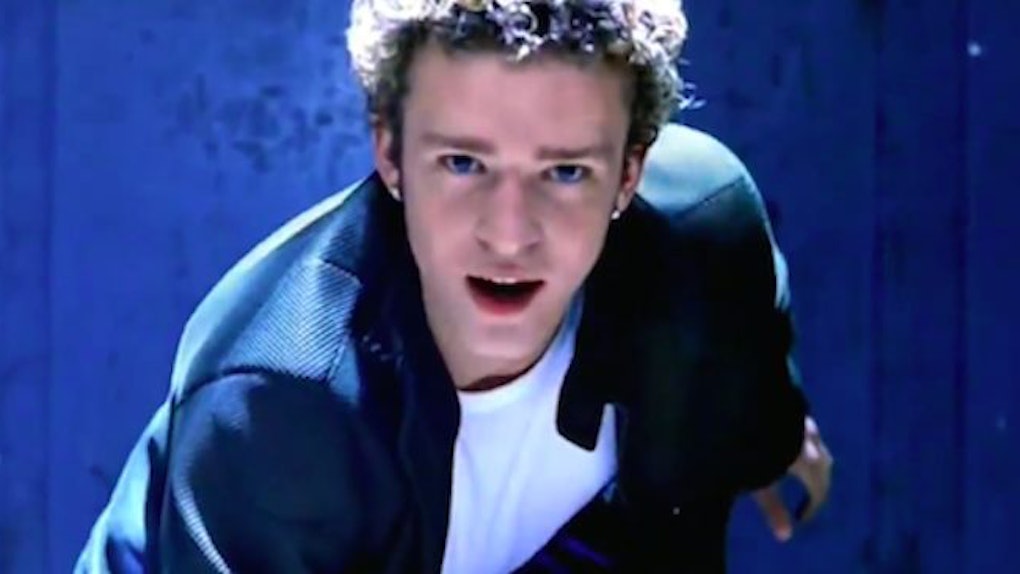 Lyrics From '00s Songs You Didn't Realize Were Sexual

You know when you go back and listen to all of your favorite '00 songs, and then you realize your entire life is a lie because you're only just now realizing how sexual they all are?

Yeah, you do. We've all done it. It's what marks our official transition from "hopeful," "optimistic" adults to the "the world is ending and I'll gladly go with it" adults we were always meant to be.

There's a reason our moms loved *NSYNC and Backstreet Boys as much as we did, guys. We were just too pure to realize it. But we def ain't pure now!!! Our childhoods weren't either!!! Thank you, late '90s and early 2000s music producers!!!

Since I don't want to be on this painful journey alone, I'm taking you along for the ride as we navigate all of the '00 songs that we realized too late are insanely sexual.

(PSA: Most of these are *NSYNC because they are the greatest boyband of all time and you can @ me.)

This song literally caused my sexual awakening and I'm not f*cking kidding.

The "Digital Get Down" lyrics start with,

Baby, baby get nasty, nasty  and we can get freaky deaky

We didn't realize it then. How could we? We were too pure.

This song is all about having cybersex. I literally thought this was about AIM for at least a decade:

I lose my mind just when you're speaking  I see you on the screen, I get to freaking  So, get down, babe  And I'll get down for you  I get so excited when I'm watching, girl  I can't wait to see you touch your body, girl  It's just me and you  So, we can do what we gotta do (yeah)

The world has never been the same.

I don't care what anyone has to say about the fact that this song is about not being afraid of space travel. THAT'S AN EASY EXPLANATION. WE MUST READ BETWEEN THE LINES.

Let's ponder music history for a moment, shall we? How many songs can you think of that has "cowboy" in the title/lyrics but isn't about sex?

OK, fine, there are probably a great deal of songs featuring the word "cowboy" that have nothing to do with sex. BUT "SPACE COWBOY" BY *NSYNC IS NOT ONE OF THEM.

Just look at these "Space Cowboy" lyrics and tell me I'm wrong:

This song is a metaphor for getting high and having sex to deal with all of the world's problems. Hahahaha, oh man. If only they knew how bad things would get.

You can @ me. There is literally nothing else "take a space ride with a cowboy" can mean.

Don't let this lovely ballad with its heavenly harmonies fool you!! This is about sex too. They just make it more ~sensual~ and ~discreet~.

Although, I'm not sure how these "I'll Be Good For You" lyrics can be called discreet:

I know you want me to  It's in your eyes  They say you do  They're telling me you'll open up your heart to me, yeah  Cause if you want me to  I'll sacrifice my world for you  And show you the way love's supposed to be, yeah

Just so you know, all of these songs are on the No Strings Attached album. It f*cks me up to this day.

I'm one of those people who doesn't think Backstreet Boys is all that great. They have some classic jams for sure, but in terms of them being the greatest boyband of all time?

Nah. That's *NSYNC. They gave us Justin Timberlake. Backstreet Boys gave us less than that. Sorry!

Anyways, the "Poster Girl" lyrics are very secretly sexual, in case you were wondering.

She likes to party in the backseat, under the bridge on the Brooklyn side Smoking cigarettes in the afterglow, taking bets till the sun won't rise She said "what good is tomorrow without a guarantee?" She can lick her lips and smile and make you want to believe

Please tell me what else "she likes to party in the backseat" is supposed to mean.

I dead*ss used to sing this song at so many karaoke nights because I thought it was a beautiful love song.

Turns out, it's about a woman who's cheating on her husband with Uncle Kracker.

"You don't look ashamed and baby I'm not scared," are we kidding? THAT'S SO SEXUAL. End me. Just end me now.

OK, so, maybe this one was a little more obvious in its sexual nature. (I will admit I was a late bloomer.)

Just read the "La La" lyrics and tell me what you think:

I don't know what I thought "I'll be your French maid" was supposed to mean, but it definitely didn't click to young me that that meant role play.

I don't have any excuse for not realizing this song was sexual. I was 14 when it came out in 2007. I should've been able to figure this out at least a little bit, right? I don't even know anymore.

The "Shut Up And Drive" lyrics go,

Get you where you wanna go, if you know what I mean Got a ride that's smoother than a limousine Can you handle the curves, can you run all the lights If you can, baby boy, then we can go all night

In hindsight this one is very obvious.

I have no words for this. Just read the "Like Whoa" lyrics:

Aren't they, like, 12 in this song?! I'm done. I can't believe I didn't realize this one. My entire life is a lie, and it's my goddamn fault.

This song came out in 1998 (what a year), so it doesn't count as a '00s song. But this one shook me to my core when I realized it had a sexual meaning.

I wanna know just what to do Is it very big is there room for two?

Shake my damn head. We all thought that video was so cute with the flowers and the grass and the dancing.

I will never be the same.

Now, in case you're wondering why I didn't list any Britney Spears songs on here, it's because I knew they were sexual 'cause my grandma wouldn't let me listen to them. Classic grandma.

But don't worry, I still listened.