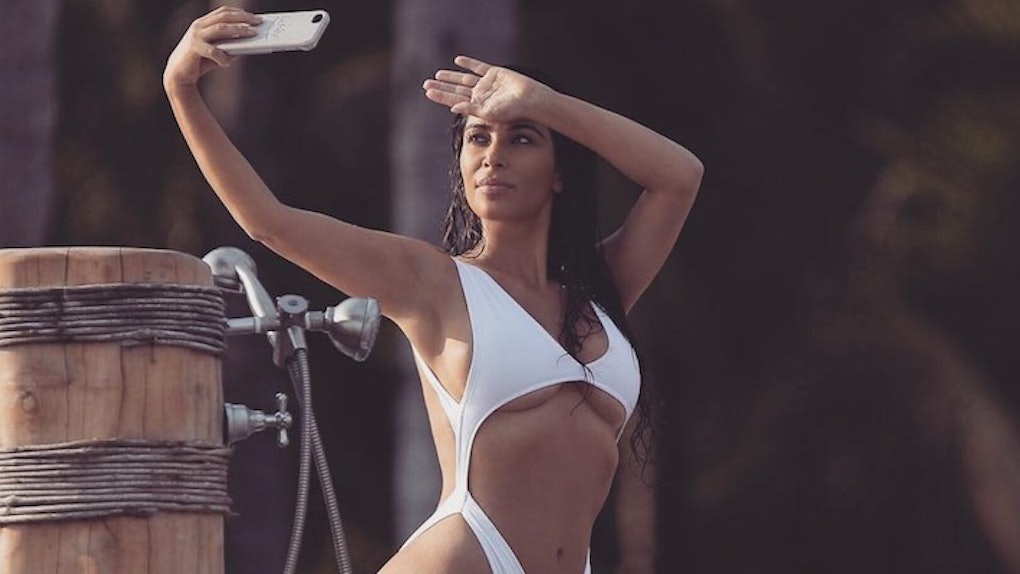 It's true. Kim Kardashian is the unrivaled queen of selfies.

No matter how you feel about the 35-year-old star, you have to admit -- her selfie game is UNTOUCHABLE.

Kim proved just that in a recent post titled "Kim-Digits: The Breakdown of My Mexico Vacation" for Kendall Jenner's official app.

Now, let's not forget that Kim Kardashian published her own book full of NOTHING but selfies (nude ones, too) titled "Selfish" in 2015.

That's why it's no surprise that she snapped over 6,000 selfies while vacationing in Mexico last month when she wasn't playing dress-up with North West.

The mother of two was out frolicking under the overcast skies as she relaxed for four days during her stay at Punta Mita's Casa Aramara.

In addition to her smartphone camera, others in attendance included a group of friends as well as North and Saint West.

How she managed to find time to do anything else other than snap 6,000 selfies is beyond me. I mean, this means she snapped about 1,500 selfies each day that she was in Mexico.

That's more than enough #TBT posts on Instagram to last her two or three separate lifetimes.

So, what's Kim's deal with selfies?

In a past interview with AdWeek, Kim Kardashian explained,

So many people think that taking selfies is just ridiculous. For me, what's so funny is I love taking pictures and posting them on social media just for memories. I'm kind of letting them know, yes, it is ridiculous, but it's all fun.

You hear that, people?! Sure, taking selfies all day long can be overkill and narcissism overload, but it's not that big of a deal.

I take it more as a fun, emotional scrapbook that I love to look back on.

After all, recent studies conducted by researchers at prestigious universities around the country have proved that sharing special moments on social media, such as selfies and other things, can be extremely beneficial to our memory.

But first, let me take a selfie...

Citations: Kim Kardashian Took 6,000 Selfies on Her Vacation in Mexico (US Magazine)