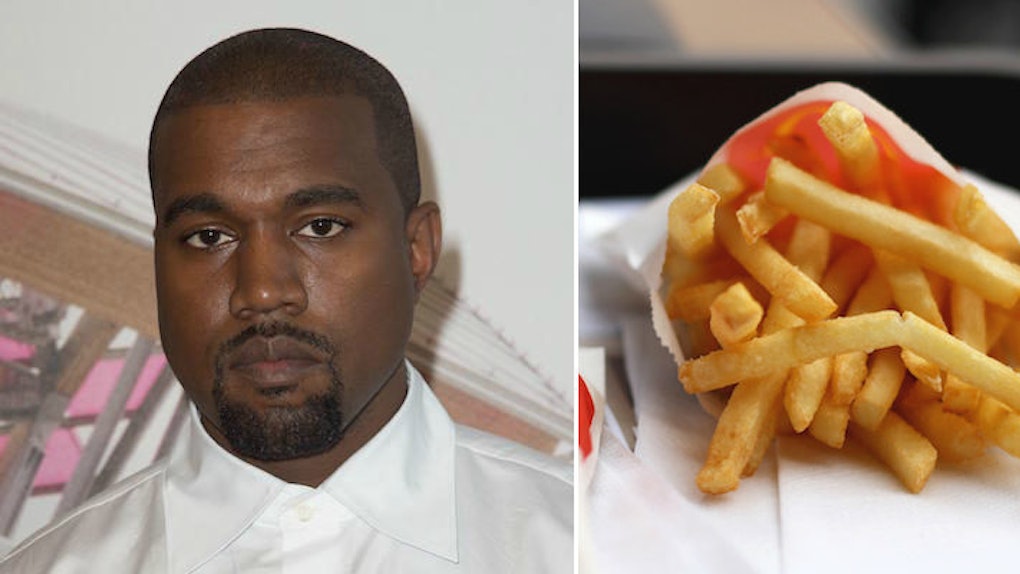 In case you thought you and Kanye West had nothing in common, guess again: Kanye also struggles to fight against the evil power of McDonald's fries.

According to Pitchfork, Kanye West wrote a poem, "The McDonald's Man," that was featured in Frank Ocean's magazine, Boys Don't Cry, which was released at a handful of locations packaged with Ocean's new album, Blond.

According to tweets, the magazine also features photos of Kanye at a McDonald's drive-through in a Lamborghini, naturally.

Thankfully, one Twitter user photographed the magazine pages so we can all take a look at Kanye's McDonald's poem.

The poem is a little repetitive in my opinion, but that minor complaint aside, this poem has it all: heroes, villains, love, death, alliances, evil plotting, jealousy, romance, passion, anger and the triumph of evil over good. OK, so maybe it doesn't have ALL that, but it has, like, half of it.

Check out Kanye's poem in full below, and see for yourself why Kanye West thinks McDonald's french fries are a worthy, evil subject for a poem:

HOW DOES IT END KANYE!? YOU SET UP A WAR BETWEEN THE FRENCH FRIES AND EVERYTHING ELSE IN AN ALLIANCE AGAINST THEM.

I guess I'll have to pick up the next issue of Boys Don't Cry to see if Kanye wrote a follow-up poem about the evil french fries.