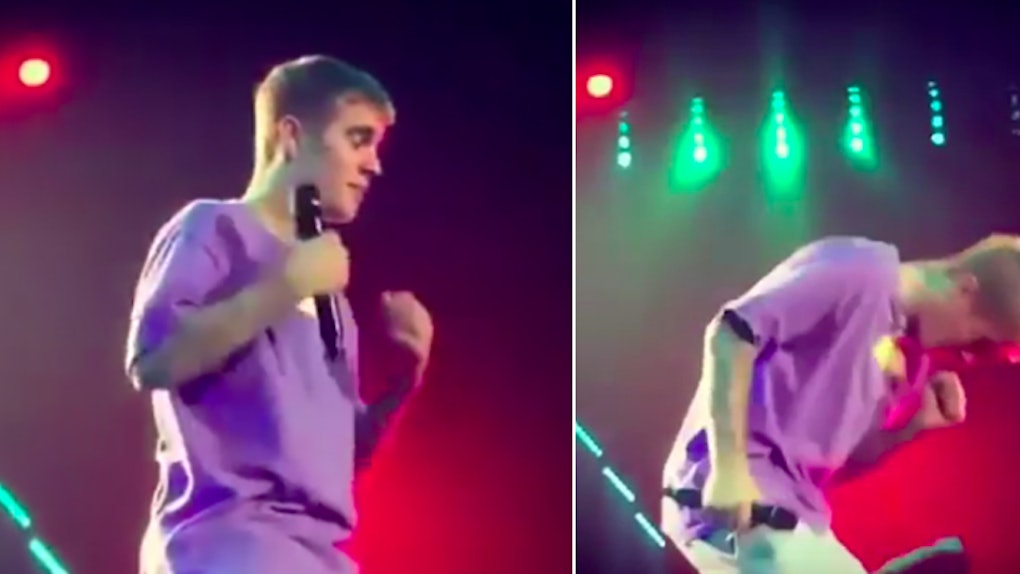 Somebody grab this boy some Kleenex, ASAP.

While on his world tour, the Purpose singer snotted all over his fans during a performance of "What Do You Mean?"

In the middle of belting out the lyrics, JB let out a gross, nasty sneeze and it went all over the crowd. BOOGERS LEGIT FLEW OUT OF HIS NOSTRILS.

I'm not even exaggerating. The snot sprinkled over his fans like a priest blessing his people with holy water.

Justin, I know you have Beliebers in the house but WTF, MAN? Take a sick day or something.

Honestly, there's probably a really happy 14-year-old girl somewhere who is sending her friends Snapchats of herself covered in JB's boogers.

"OMG, JUSTIN BIEBER'S SNOT IS ON ME. I'M NEVER WASHING THIS SHIRT AGAIN! "

Kid's got a dedicated fanbase. Beliebers are insane.

I've already watched the clip 65 times by now. It's so good, especially the slow-mo part. Here's a screenshot of the boogies mid-air so you can really see how big they are.

After the sneeze, it kind of looked like Justin was gonna take off his necklace and offer it to whoever's face he snotted on.

But nah, he just kept singing and pretended like it never happened. We all saw it, bro, there's proof in the clip.

Now, I'd like to leave you all with a beautiful medley of Justin Bieber's songs written by my editor Steph Ironson:

Snot, snot, snot, on you chillin' but the fire while we eatin' fondue. What do you sneeze? All I neeeeeed is a boogie and a beat When you told me that you hated my friends, the only problem was with you and snot them.

Get back to work, Steph.