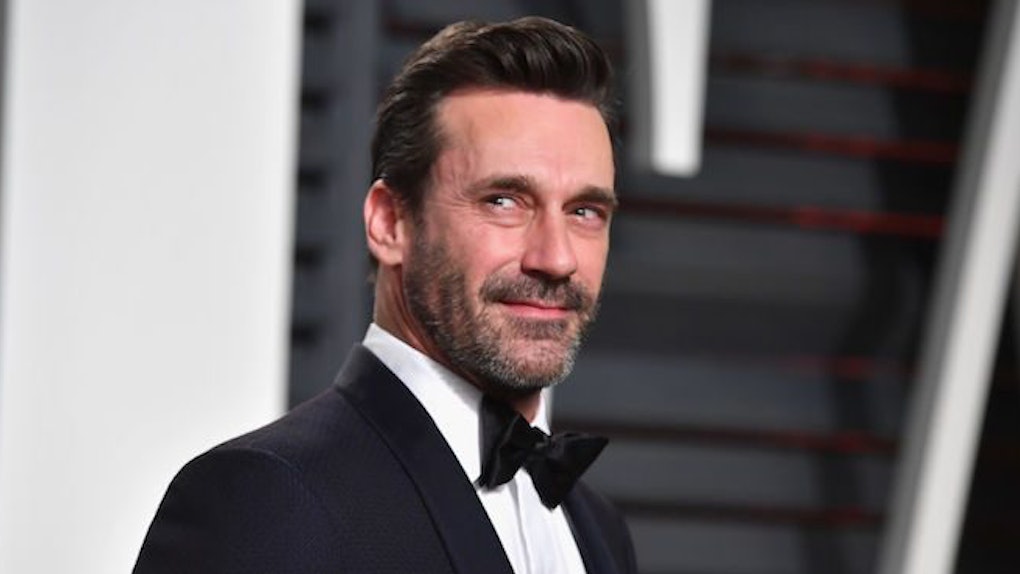 Jon Hamm's Bulge Sent The Internet Into A Frenzy Again

When I was around 9, my mother brought me to try on some of the Gap's highest quality denim jeans.

Unfortunately, I told her that wouldn't happen, as I decided to let my balls hang free that morning, going commando under my current pair of pants.

To say she wasn't very pleased would be an understatement, and since that day, I only stroll around with no underwear in the confines of my own apartment.

Jon Hamm doesn't follow my personally implemented rule, though. Frankly, when you have a baby's arm for a penis, you probably don't have to.

The "Mad Men" star's appendage was captured by paparazzi this week, nonchalantly flopping back and forth while Hamm strolled around in a Los Angeles parking lot.

And while the rest of the internet and I are still in awe of his real-life eggplant emoji, this isn't the first time Hamm Jr. caught America's eye.

You see, Hamm's massive bulge is something we've drooled over before. The 46-year-old has been captured out and about on numerous occasions with nothing but the sheer fabric of his pants to keep his penis from poking onlookers in the eye.

Going commando is second nature for Hamm. Reports over the last few years have essentially confirmed suspicion Hamm isn't a huge fan of underwear. And by "isn't a huge fan," I mean he probably hates them with a burning passion. But can you blame him?

If I also had that kind of penis dangling between my legs, I'd want it to be let loose, not confined to a tight cage of cotton material.

But Hamm can't have his cake and eat it, too. Naturally, the prominence of his package in public has garnered tons of attention. But in 2013, he told Rolling Stone that he wished his privates would just remain... well, private.

"They're called 'privates' for a reason," Hamm said in his Rolling Stone interview. "I'm wearing pants, for f***'s sake. Lay off."

I mean, it's not like I'm a f***ing lead miner. There are harder jobs in the world. But when people feel the freedom to create Tumblr accounts about my c***, I feel like that wasn't part of the deal... But whatever. I guess it's better than being called out for the opposite.

That's right, Hamm. Be thankful for that monstrous peen of yours. The internet sure is.

A local museum could have an exhibit dedicated solely to his penis.

Or, you know, it could be used to stop crime.

And despite his apprehension, let's hope Hamm continues to let Hamm Jr. brighten up our day for years to come.

But, if he ever does decide to start sporting underwear and needs help picking out some fresh pairs, I'm an excellent stylist.