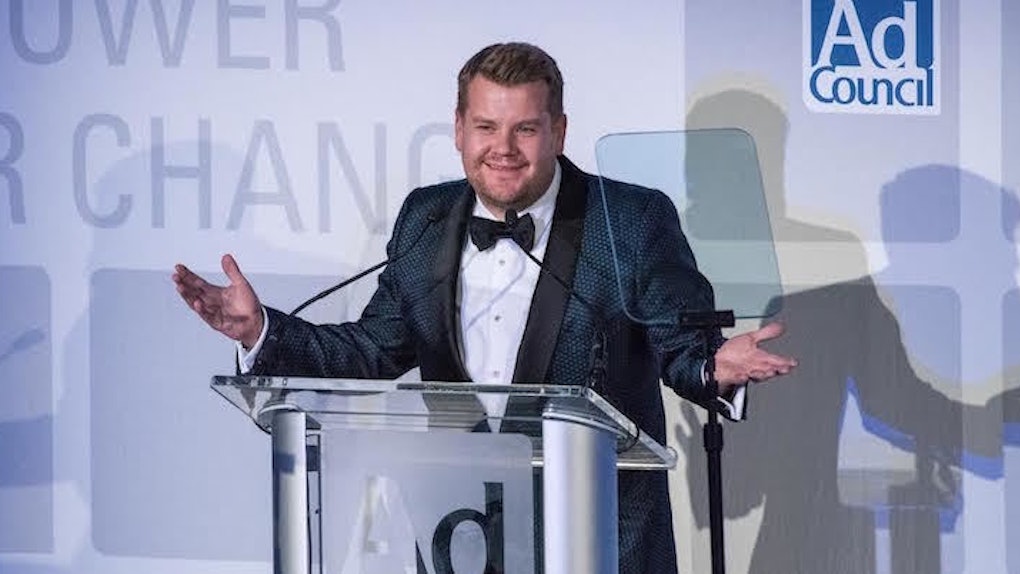 James Corden Gets Real About Bullying

On November 16, a celebration of the most influential, hard-working and creative minds in the advertising and media world took place at the Ad Council's 63rd Annual Public Service Award Dinner.

The event raised an astounding $4.5 million dollars, included a performance by Sheryl Crow and was hosted by the world's most charismatic man, James Corden.

Corden, who has stolen the hearts of the nation with his "Carpool Karaoke" segments, took a break from singing behind the wheel to address the serious impact of bullying and the importance of education, equality and love, as well as pay tribute to the men and women who have dedicated themselves to bettering our world.

The dinner honored this year's Public Service Award recipient Shantanu Narayen, the president of Adobe, whose passion for public service, youth empowerment and creative innovation through technology was evident in his humble acceptance.

It was an incredibly inspiring evening.

Among the 1,400 esteemed guests were six uplifting individuals who were featured in this year's Ad Council PSAs: Lizzie Velásquez ("Bullying Prevention"), Jocelyn Esparza ("High School Equivalency"), Lola Silvestri ("Meals on Wheels") and the Henderson-Strong family ("Love Has No Labels").

You may remember the chill-inducing "Love Has No Labels" video that was released this past March, which has been viewed over 165 million times since its debut.

In another touching video, audiences meet the incredible Lola Silvestri, a 95-year-old woman who is committed to raising awareness for Meals on Wheels.

Lola speaks on the value of her independence and the benefits that come with selfless organizations like Meals on Wheels.

Additionally, the Ad Council's powerful campaign against bullying has more relevance now than ever before.

In these uncertain times, the messages of love and acceptance the Ad Council has put out into the world are meant to resonate with everyone.

Last night's event was a profound reminder of the importance of acceptance, respect and dedication to making the world a lovable, livable place.