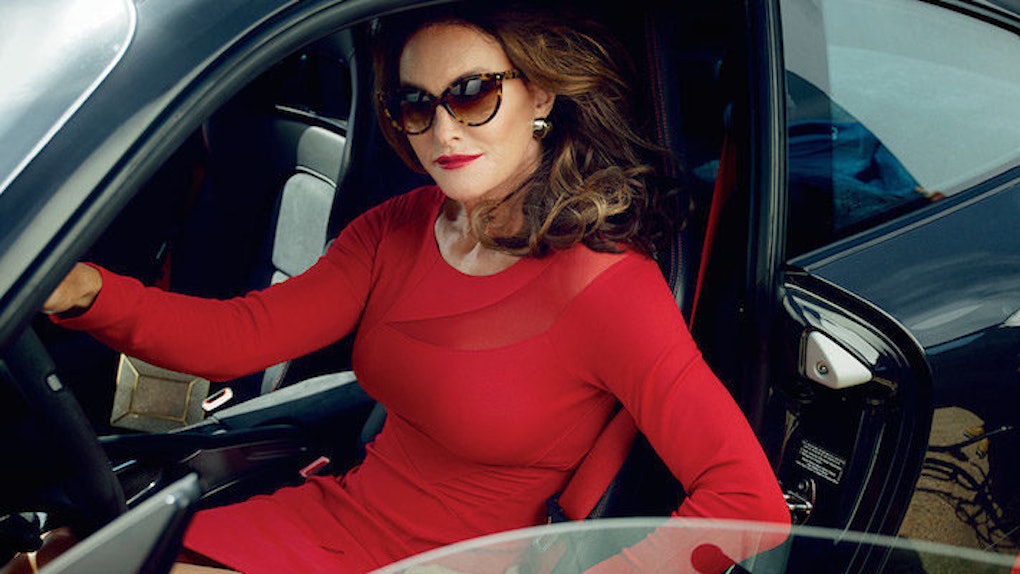 Why Female Empowerment Shouldn’t Mean Taking Your Clothes Off

When I saw Caitlyn Jenner on the cover of Vanity Fair, I thought, “Wow, she must really feel empowered... she’s taken all her clothes off.”

Because that’s what we do when we’re empowered, right? Take our clothes off?

How else would we know a woman is happy with who she is?

I racked my brain trying to come up with a woman who is a household name who we haven’t seen in lingerie.

Hillary Clinton is the first one who comes to mind. Oprah is another. The rest could be counted on one hand.

I know, I’m being a party pooper. I'm not going to argue about how Caitlyn Jenner looks.

I’m just lamenting that stripping seems to be the only way to publicly communicate self-acceptance.

Remember Beyoncé’s 2014 cover for Time magazine’s “Most Influential People?” She was in a bikini.

Why?! It wasn’t for global warming awareness.

On one level, these lingerie and bikini photos pay homage to positive body image campaigns, but on another level, it says that, as a woman, no matter what you believe in or what you’ve accomplished, what matters most is how your body looks.

It’s the visible proof that you’re happy and confident.

To stay relevant, women in the media are expected to willingly objectify themselves.

If a woman is not traditionally beautiful, she can either pile on the makeup, or go for a dark or edgy look, but she’s still expected to try to put her sexiest foot forward.

Photoshop can take care of the rest.

Even actresses are sick of the status quo. Rashida Jones, one of the stars of "Parks and Recreation," wrote a piece for Glamour about the pornification of everything, saying women can’t possibly all be into showing so much skin.

Owning and expressing one’s sexuality has been an important step for women, she said, but most of what’s out there seems so staged.

She writes, “In my opinion, we are at a point of oversaturation.”

In television, this oversaturation is known as a “tonnage issue,” which TV network censors will report when there is an overuse of a certain phrase.

More like, we have reached the tonnage tipping point.

An unintended message from this oversaturation of images and the personas that accompany them is the young girls who imitate celebrities may not see that personal sexual expression is related to having pride about who they are on the inside.

In her book, "Female Chauvinist Pigs," Ariel Levy, a staff writer at the New Yorker, discussed the impact sexual objectification and self-objectification have on the development of sexuality and identity of young women.

She investigated the rise of the raunch culture and the effects of female “empowerment,” shifting from the fight for women’s rights to strip dance classes.

Levy writes that women of all ages are confronted with the same issues, yet:

Levy references interviews with teen girls conducted by Deborah Tolman, for her book, "Dilemmas of Desire."

The girls also ignored or suppressed their own arousal, in what Tolman described as “silent bodies,” because they were terrified that feeling “embodied sexual desire,” would only lead to disease and unwanted pregnancy.

What the girls mostly felt was a “great deal” of confusion and anxiety.

I’ve always wondered why so many women (and some men, too) loathe feeling objectified, yet, with any bit of fame or attention, find that objectification to be empowering.

We refuse to admit that being a sexual object is a powerful position, yet we celebrate our own success by choosing to present ourselves as a collection of body parts to be ogled.

I don’t think young girls are the only ones who are confused.

Perhaps, we resent that sexual power can be so fleeting and biologically determined -- both things over which we have no control.

I’m not sure who has more courage: the woman who takes her clothes off, or the one who keeps them on.

But, we have to start finding other ways to convey empowerment.