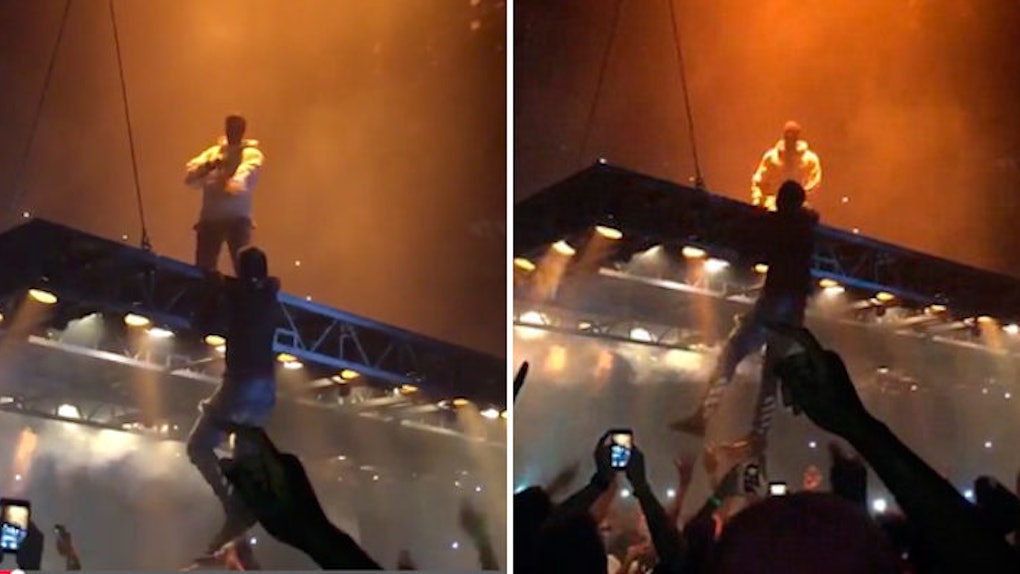 You miss 100 percent of the shots you don't take while dangling from the corner of Kanye West's floating stage during the Atlanta stop on his Saint Pablo Tour.

One fan knows this classic advice well, which is likely why he leapt from his spot in the general admission pit and latched on to Yeezy's suspended, traveling stage for a brief, miraculous moment.

In a video of the event snapped by Chase Brown, the 39-year-old rapper gestures to his overzealous fan, who immediately lets go and drops back into the crowd out of utmost respect for his idol (or as a result of Ye's Jedi mind tricks, which is an equally plausible explanation at this point).

Everyone just kind of turned and looked at each other like, 'Did that really just happen?' … But the show continued and not much was said about it. The overall show was great, Kanye put on a great show.

The climber took the leap during “Power,” a song that, let's be honest, has inspired all of us to trespass on the personal, floating stage space of our fellow man once or twice before.

Citations: Kan-ye get down? West is forced to intervene as fan attempts to mount the floating stage on his Saint Pablo tour Read more: http://www.dailymail.co.uk/tvshowbiz/article-3786763/Kanye-West-forced-intervene-fan-attempts-mount-floating-stage-Saint-Pablo-tour.html#ixzz4K8oDXHua Follow us: @MailOnline on Twitter | DailyMail on Facebook (Daily Mail)