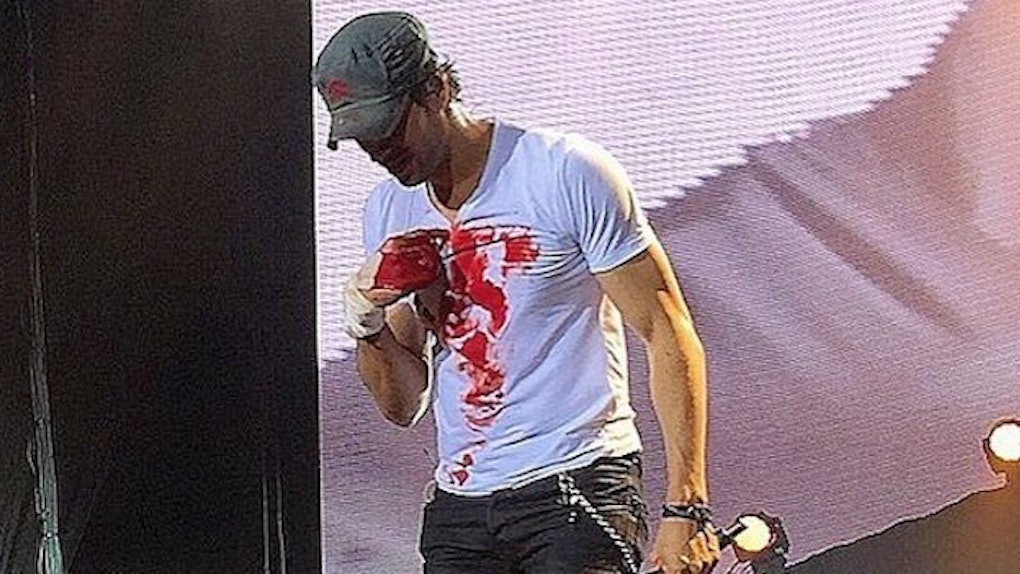 Enrique Iglesias was in the middle of a concert in Tijuana, Mexico this weekend when he tried to grab a drone flying above the stage.

The drone was capturing video of the concert, and Iglesias had hoped to share his point of view of the show with the audience.

However, Iglesias was unsuccessful in his attempt to grab the drone and ended up slicing the fingers on his right hand with the propellers.

Iglesias began bleeding profusely from his hand, a fact that was made all too apparent because of the white t-shirt he was wearing.

Iglesias received some medical attention on the side of the stage and ultimately performed for another half hour.

After the show, Enrique was treated in an ambulance at the airport. He will see a specialist in Los Angeles in the coming days.

The lesson here is simple: Don't grab drones, especially if you're a Latin pop star.

Here's what getting cut by a drone looks like:

It's not a pretty picture.

Enrique painted a heart with his blood.

@enrique305 Yesterday Enrique Iglesias had cut his hand during the concert with a drone and draw on his t-shirt pic.twitter.com/He78dlgu9X — Gonia@ENRIQUETTE (@Gonia68Gonia1) May 31, 2015

He did his best to hide his pain.

And he continued on with the show.