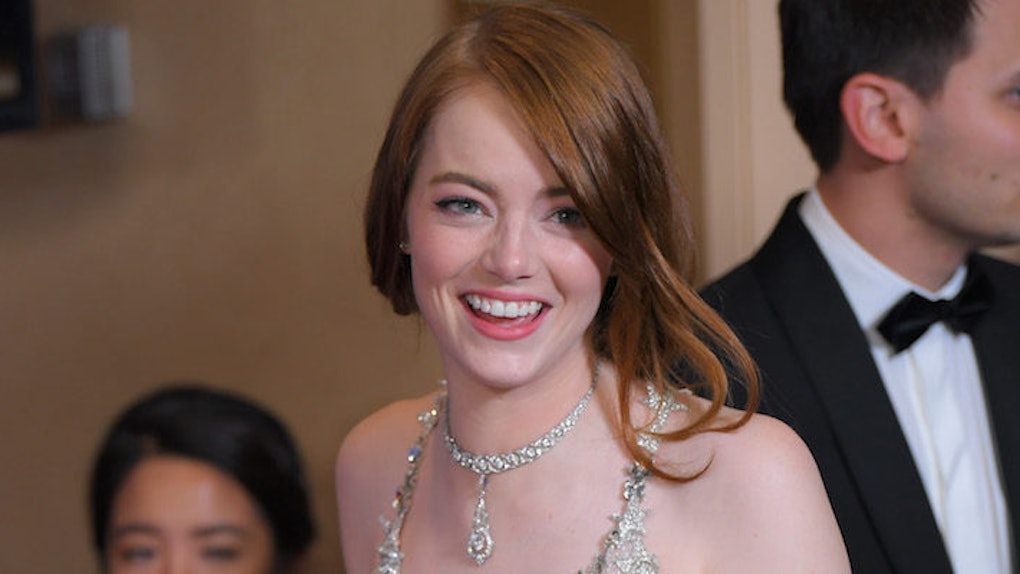 Emma Stone won a Golden Globe for Best Actress in a Musical or Comedy, but I'd like to nominate her for another award.

Emma, for all her elegance and grace in "La La Land," attempted the most spectacularly awkward hug I've ever seen while at the 74th Golden Globes.

I'm serious. This hug was so unbelievably, astoundingly bad that I really think the actress deserves an award for not only making it happen, but also surviving it.

He got up to go accept his award. First Ryan Gosling gave him a quick hug. It was maybe a little awkward, but no biggie. There was a lot was going on.

But then... this happened:

Emma tried to hug Damien while he was in the middle of kissing his girlfriend, Olivia Hamilton.

When she realizes what went down, Emma backs off immediately and apologizes to Olivia. It looks like she said,

That was awkward, I'm so sorry!

It was awkward. It really was. Let's look at that again.

To be fair to Emma, it kind of does seem like she is up next in the hug lineup.

Unfortunately, Damien was looking at his girlfriend instead. And then... yeah.

After the hug, Emma realizes what just happened.

And then Olivia realizes what just happened.

They both share a look of mutual mortification at a hug gone so very, very wrong.

And then Emma remembers that it all happened on live television.

So yes, that is the worst hug I've ever seen, yet somehow, Emma survived.

In fact, not only did she survive, she went on to deliver a very moving speech of her own when she won Best Actress.

Now that's what I call a recovery. Stay exactly who you are, Emma Stone.

Citations: Emma Stone Deserves a Golden Globe for Best Recovery After a Failed Hug (The Cut)