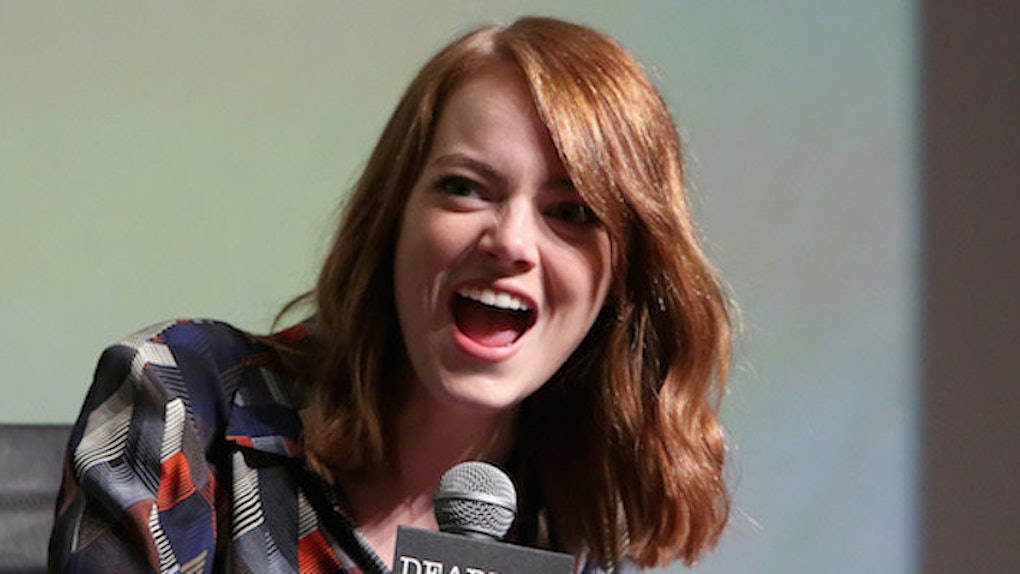 After working with Ryan Gosling on 2011's “Crazy Stupid Love” and 2013's “Gangster Squad,” Emma Stone has reached the point where she's shamelessly sweating all over him like the secret beast she is (AKA living the modern woman's American Dream).

The 28-year-old stopped by “Ellen” to promote her new film “La La Land,” in which she and the Gos sing and dance and smooch it up big time, sister.

She told the host,

It makes it very easy when you know someone and when you've worked with them like that. Learning to ballroom dance, to learn with someone that you don't know, must be terrifying… But with him, I was just sweating all over him and felt fine about it.

I sweat a lot… After about a minute of any type of physical exertion, I break into a horrible sweat… This is a new problem that I should probably get checked out. We'd dance for about a minute, and he'd be like, 'You alright? You ok?' [I sweat] everywhere, everywhere.

When Emma isn't sweating all over one of the most beautiful men in Hollywood, she's kicking back with pal Jennifer Lawrence. J. Law spent a major chunk of a recent Vanity Fair interview praising the sweet crap out of her sweatiest bestie, Emma.

The “Passengers” actress told the magazine,

[Emma] texted me that she got my number from Woody [Harrelson]… I replied, 'Fuck off!' And we've been really good friends ever since… I love my job… I don't know what I would be without acting. So if there is someone who loves the same thing, it should bring us closer. But it depends on how that person is, and Emma is so normal and lovely… If I wasn't her biggest fan, I would've Tonya Harding'd her in the kneecaps.

Dang. A reference to the 1994 US Figure Skating Championships? High praise.

She may not even know this… but there was definitely a time early on when I was like 'OH HEY MY EGO IS GOING NUTS SHE'S SO GREAT AND VIBRANT AND TALENTED I'M SCREWED I'LL NEVER WORK AGAIN GOODBYE YELLOW BRICK ROAD.' Then I chilled the fuck out — and remembered we're completely different and there is room for everyone, even if it's an industry that doesn't really seem to support that idea up front… We both really do love each other and care about each other as people, beyond being actors. I support her completely when it comes to work, and I feel the same from her, but I know we'd be friends even if we didn't do the same job.

With friends like these, who needs to worry about her glandular condition? Not Emma Stone.