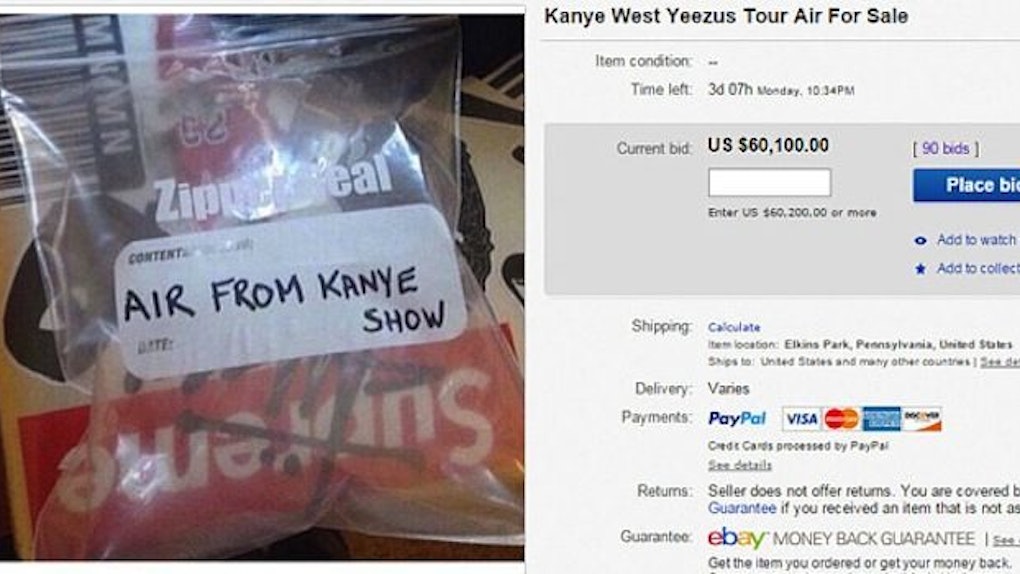 A Bag Of Air From One Of Kanye's Concerts Is Selling For $60,000 Online

Today in "WTF America?" someone is literally selling a ziplock bag of air from Kanye West's surprise performance in London on Tuesday.

It would appear people truly are obsessed with Yeezy, and are willing to pay top dollar for even a sliver of his existence. Pardon me, can't see what I'm writing because I'm rolling my eyes so f*cking hard.

An eBay seller posted the bag of air with a starting bid of $5 on Sunday. With three more days until the final closing, it has since amassed enough bids to bring the selling price to a whopping $60,100.

The eBay user stangeedon1 listed the item as follows: "Kanye West Yeezus Tour Air For Sale." The air was allegedly captured after he "held bag open and sealed air in."

And this isn't even the only bag of air available to buy from the concert. Another user from Texas is selling one with a "buy now" option, asking for a starting price of 99 cents.

With 90 bids and counting on the current bag, this can only be a another boost for Kanye's already inflated ego. We're betting Yeezy is likely unsurprised that someone would pay actual, real life money on a bag of oxygen from one of his concerts.

Citations: Air from a Kanye West show selling for $60,000 (Telegraph)