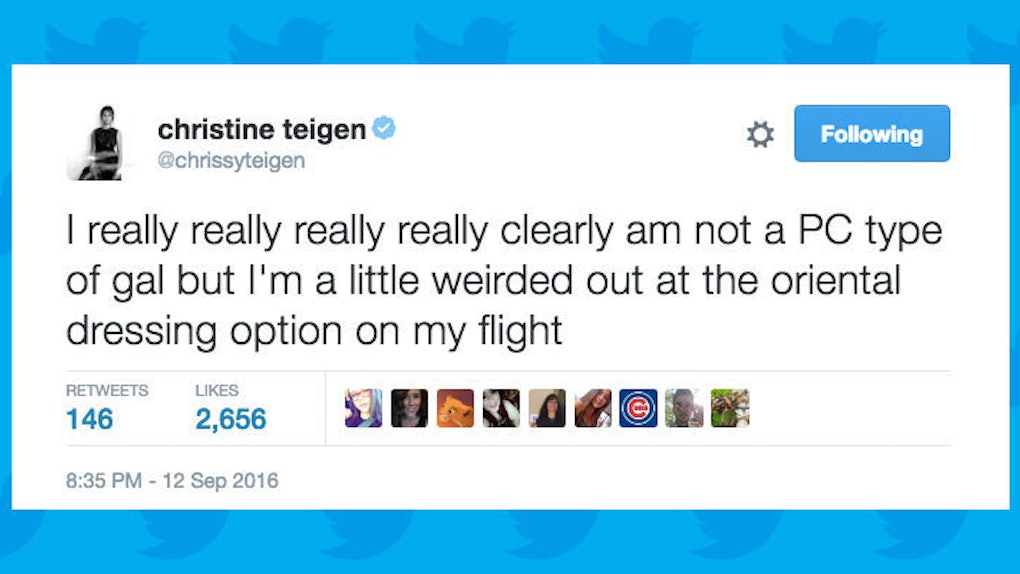 People Are Attacking Chrissy Teigen Over A Tweet About Salad Dressing

People on the internet can get upset about literally anything.

This time? It's over a salad dressing labeled "Oriental" (instead of "Asian") Chrissy Teigen said was weird, but not offensive to her.

Her Twitter fans took issue with this because they wanted her to be offended.

Anyway, because everyone apparently cares about what the model gets offended by, her comment sparked a pretty epic Twitter debate among fans.

It all started with these two tweets.

She clearly said (over and over) she wasn't offended by the word "Oriental" just weirded out by it.

While Chrissy doesn't get hung up on that word, her fans clearly do. She chalked it up to ignorance and wanted to move on with her life.

Her fans obviously wouldn't let her, though, because all of this went down on Twitter, and that's just not how the internet works.

I would have been fed up with this debate, too.

Chrissy's fans are vocal, but she doesn't hold back at all.

ME NEITHER. I am just saying I am not offended with the word https://t.co/JhfoS1qKZy — christine teigen (@chrissyteigen) September 13, 2016

All of this over SALAD DRESSING, guys.

OK, I know it's a little bigger than that. But still!

You'd think Teigen's fans would have something better to do than bug her with this stuff on Twitter.

At the end of the day, we know her fans are loyal to her no matter what she says about the word "Oriental."

At least she can have intelligent conversations with them that don't get out of hand. If this debate sparked from Kanye's tweets, we'd have a whole other kind of Twit-storm on our hands.

Citations: Chrissy Teigen Is Getting Serious Twitter Hate After Saying She's Not Offended By The Word 'Oriental!' (Perez HIlton)