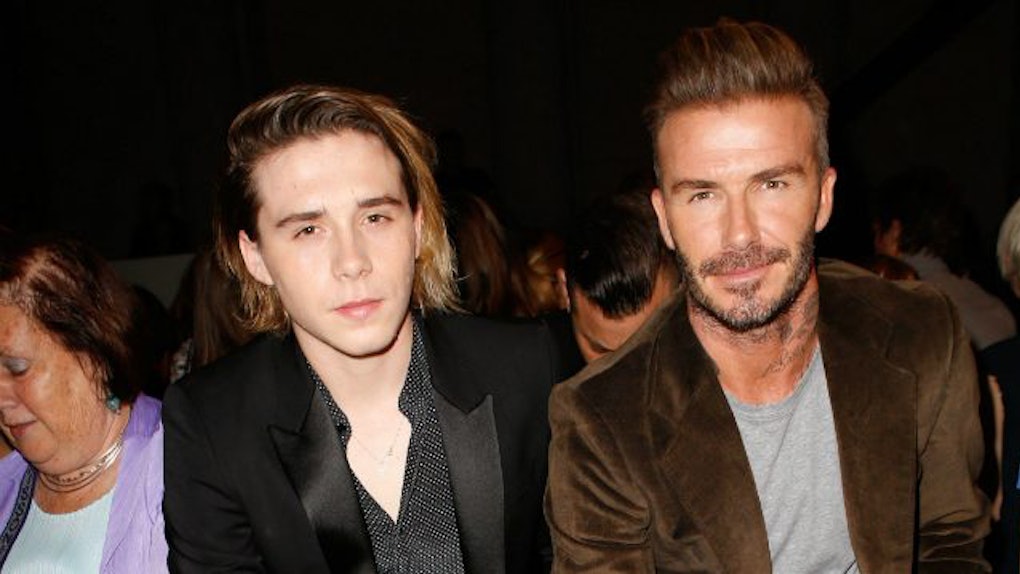 Brooklyn Beckham Got His First Tattoo, It Matches His Dad's

Brooklyn Beckham has an artsy AF Instagram, attends college as a photography major and has just officially received his first tattoo.

Basically, he's living the dream of 18-year-olds across the country.

Personally, I'm thankful I was dirt poor in college because I had some terrible ideas for tattoos at 18, like that face tattoo I wanted of a spider web with a lion caught inside of it and the spider eating the lion.

Brooklyn may be inspired by his father David Beckham. The soccer player has over 40 tattoos on his Sexiest Man Alive body.

So, when I heard Brooklyn got ink that was inspired by his father's, I hoped it was David's tramp stamp.

Sadly, it was not.

Brooklyn was tattooed by his father's artist  Mark Mahoney, who owns the Shamrock Social Club in LA, and it looks like he was inspired by a piece on his father's torso.

Brooklyn was inspired by a piece on David's side, a Native American wearing a headdress.

This is obviously a fantastic nod toward his incredibly loving and supportive father. In fact, if my father had tattoos, it may be something I would have done myself.

But he doesn't. My grandfather did, but they were naked women, and as much as I love naked women on me, I am a professional and can't have one on me at very important business meetings.

Honoured to have my first tattoo done by dads friend Mark Mahoney.

Mahoney has tattooed a number of famous people like Lady Gaga and Johnny Depp.

Brooklyn is set to release his first book of Photography, "What I See," on May 4, so yes, I have done nothing with my life, and an 18-year-old does have more drive and talent than me.

But at least my dad doesn't have a tramp stamp of my name.

Citations: Brooklyn Beckham Has Gone And Got A Tattoo (Lad Bible)