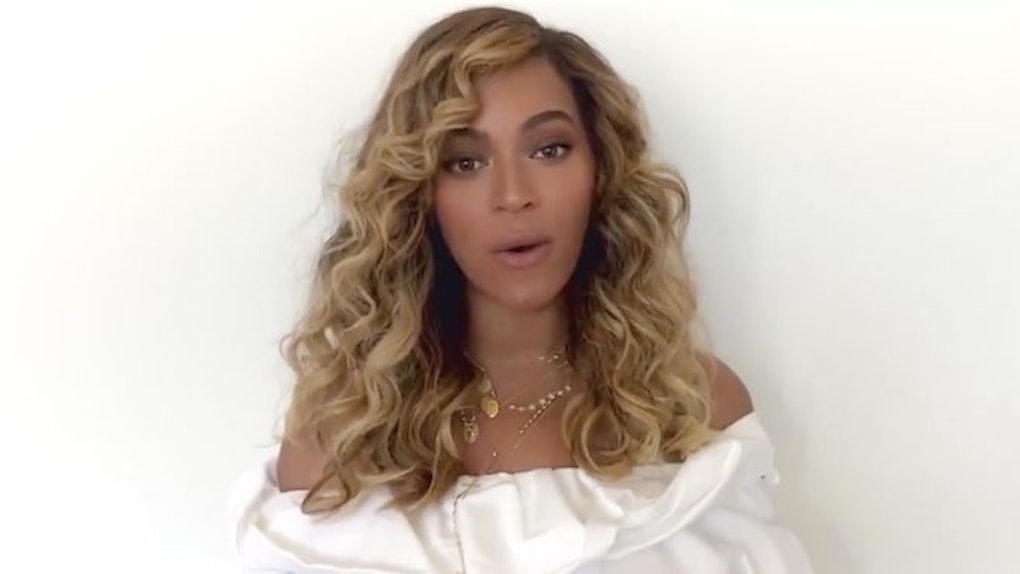 Beyonce's 'Hand In Hand' Hurricane Benefit Video Is So, So Emotional

If the news, social media, and your own moral compass aren't loud enough to make you listen up and pay attention to the out-and-out war nature is unleashing on the world today, maybe Queen B will. As part of a major celebrity fundraiser for hurricane support, Beyoncé's "Hand in Hand" video is making the rounds, encouraging listeners to pay attention, all while highlighting some serious horrifying truths about the political, social, and natural state of our country.

Originally, the "Hand in Hand: A Benefit for Hurricane Relief" was designed to help those victims specific to Hurricane Harvey that struck earlier this month in Texas, ABC reports. Later, it was extended to include people touched by Hurricane Irma as well, which raked the southern east coast this past week. A truly staggering number of A-list celebrities turned out to support the cause, which raised more than 44 million dollars. It was also broadcasted live across 15 networks, streamed on social media, and aired on over 150 radio stations across the country.

Along with Beyoncé, folks like Cher, Oprah, Justin Timberlake, Kerry Washington, Stevie Wonder, Stephen Colbert, Leonardo Dicaprio, Tom Hanks, and many, many, many more donated their time and energies to the cause.

In her video, Beyoncé spoke to being personally touched by Hurricane Harvey as it beat down on her hometown of Houston, Texas, and also took the opportunity to speak to the nation as a whole about how we can support one another and better ourselves.

The video is thoughtful and straight forward. In it, Beyoncé says,

It's impossible to watch the news without seeing violence or racism in this country. Just when you think it couldn't possibly get worse, natural disasters take precious life, do massive damage, and forever change lives, leaving behind contaminated water, flooded hospitals, schools, and nursing homes, and countless families are now homeless. In my hometown city of Houston, people need food, clothing, cleanig supplies, blankets, shoes, diapers, and formula for babies, and of course, clean water. The elderly need wheelchairs and kids need books and toys so they can continue to dream. Natural disasters don't discriminate. They don't see if you're an immigrant, black or white, Hispanic or Asian, Jewish or Muslim, wealthy or poor. It doesn't matter if you're from [Houston neighborhoods] Third Ward or River Oaks, we're all in this together. Seeing everyone of different racial, social, and religious backgrounds put their own lives at risk to help each other survive restored my faith in humanity. True healing is in helping.

She finished by touching on the various natural disaster statistics around the world, and adding, "Tonight, we come together in a collective effort to raise our voices, to help our communities, to lift our spirits, and heal."

Bey also visited the St. J0hn's Church which she attended as a child, to speak to Hurricane survivors in Houston earlier this month. According to US Weekly, she was accompanied by her mother, Tina Knowles Lawson, her daughter Blue Ivy, and friend and former band-mate Michell Williams.

In a speech, she said,

Y'all are my family. Houston is my home. I thank God that you're safe, your children are safe. I think that what really matters is your health and your children and your family. And I just wanna say I love you. I've been blessed so that I can bless other people, and I ask of God to continue to do that for other people.

According to ABC News, there is an estimated damage cost of $150 billion to $290 billion dollars between Texas and Florida disruption alone. Hurricane Harvey took 70 lives, and there have been 22 reported deaths due to Hurricane Irma as of Wednesday, Sept. 13. This does not include the totally catastrophic damages suffered in the Caribbean.