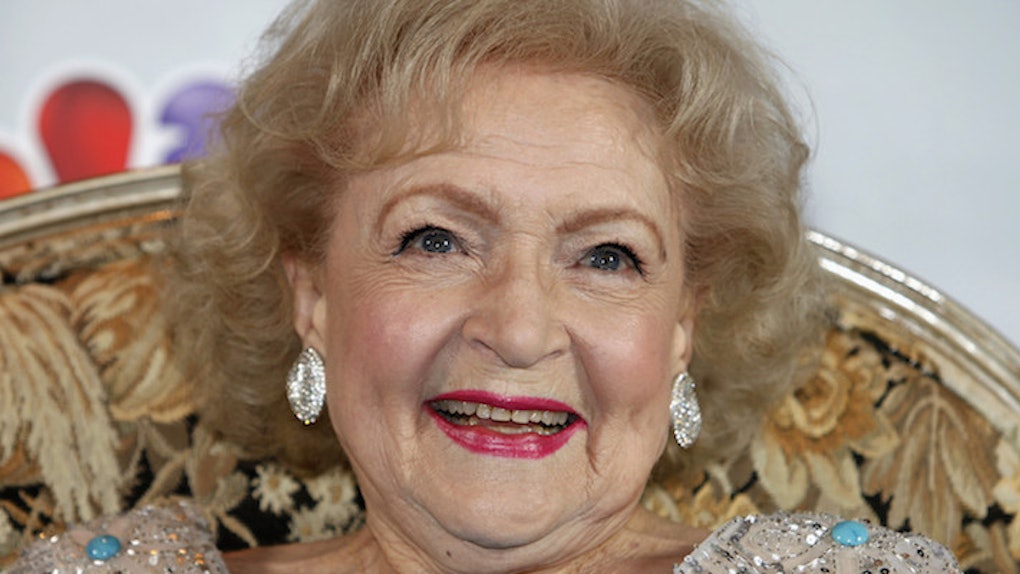 Betty White Reveals She's Single And Down To Date

If you're single and ready to mingle, you might want to figure out how to get in contact with Betty White. It seems the Hollywood icon is on the market.

Now, I know what you're thinking: How would I know that 94-year-old Betty White is single and ready to spice up her dating life?

Nobody asks me! Who's gonna want to ask out a 94-year-old woman? It just doesn't happen.

The NBC host then went on to ask whether Betty White sees herself more as Rose Nylund, which she played in "The Golden Girls," or her role as Sue Ann Nivens on "The Mary Tyler Moore Show."

White explained that she sees herself more as Nivens because "she likes men" and "so does Betty" because "it's kind of a hobby" of hers.

Dayum! Way to be SUPER direct and straight to the point Betty. Well, there you have it, people. Betty White is waiting for you to pencil her into your dance cards!

Don't worry, though. Betty White has experienced true love before. You don't have to feel bad for her. The 94-year-old Hollywood legend was married for 18 years to TV personality Allen Ludden. When he died in 1981, White said she'd never remarry.

Now that's a commitment! Speaking of "commitment," during her interview with Al Roker, Betty White stated that she has no plans on retiring from the entertainment industry anytime soon -- even after 70 years in the business.

Damn, a woman who knows exactly what she wants... There's nothing more attractive than that... And the "dabbing" is pretty hawt, too.

Check out the full interview above.