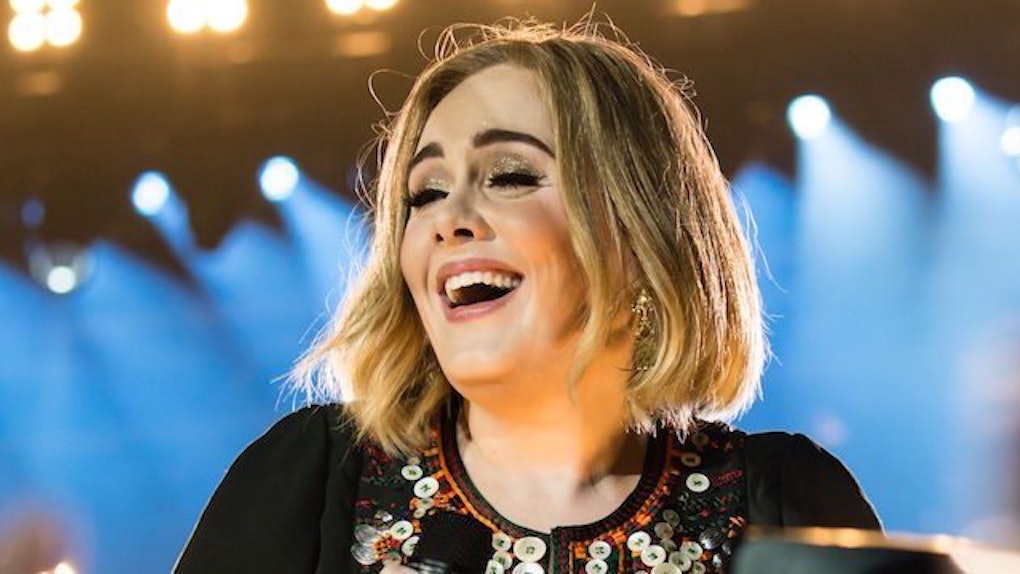 Adele Has A Secret Twitter For All Of Her Unfiltered Thoughts

Attention skilled social media stalkers: I have a new case for you. We have to find Adele's secret Twitter account.

So, ummm... WHERE IS THIS GLORIOUS ACCOUNT?! Unfortunately, I don't know... yet. But it definitely exists out there in cyberspace somewhere.

The Sun reports that Adele revealed the existence of her personal Twitter to the crowd at one of her Australian concerts this week, saying she keeps the account a secret from her management, who disallowed her access to the @Adele account for being too "mouthy."

I was looking on Twitter last night. They don't know I have a secret account, well obviously they do now because I said that. By 'they,' I mean my management... I'm not allowed access to my own Twitter because I'm quite mouthy and I say the wrong thing a lot of the time. So they took that privilege away from me.

So what I'm getting from this is that Adele is tweeting crude jokes and just generally going wild somewhere on Twitter, but we just don't know WHERE.

Of course, back in the old days before Adele became a worldwide superstar, she would tweet to her heart's content on her main account. That all changed as her name grew, and she admitted that a few cases of "drunk tweeting" got her management team worried enough to step in and take over the account.

Now, as she admitted to her fans back in 2015, the tweets she wants to send out on her main account need to go through two people on her management team.

That means there must be a goldmine of hilarious Adele tweets that we were never able to see. but there's hope to find them yet!

I like to consider myself pretty proficient in the art of social media stalking, but I don't even know where to begin on this case.

Please let me know if you manage to find this hidden gem.

Citations: 'I'M TOO MOUTHY' Adele reveals she has a secret Twitter account and can say whatever she wants after her management banned her from tweeting on her own (The Sun)