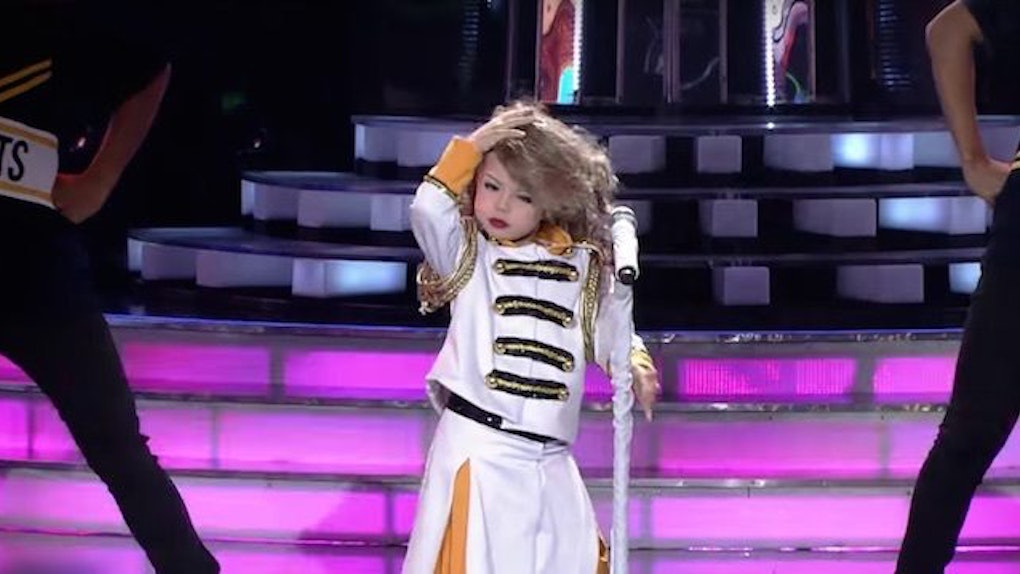 I've never wanted there to be a mini-version of Kanye West more than I do right now.

I'm going to try to piece together exactly what's going on in this clip, but I'm not making any promises I get it right. I spent the entire seven minutes and 18 seconds of this video deciding whether this was cute or just, like, sooooooo wrong.

There's a show in the Philippines called "Your Face Sounds Familiar," a title I assume is a lot smoother in Filipino.

"Your Face Sounds Familiar Kids" is the kids version of that show, kind of like "Chopped Junior" or "Watch What Happens Live! with Baby Andy Cohen."

The premise is pretty self-explanatory, I think. Kids come on to the show dressed as their favorite celebrities and do mini-sets based on the person they're impersonating. There seems to be some sort of judge panel component but I'm not sure what the criteria for getting a high score could possibly be in this game.

If you're not creeped out by the premise of the show, maybe this screenshot of the performer panel will change your mind.

This is somehow worse than "Children of The Corn."

From the little I know about this program, Xia Vigor is the clear stand out of the show.

The 7-year-old Taylor Swift impersonator blew away the "Your Face Sounds Familiar Kids" audience during a recent episode, singing a few Swift songs and going through a quick on-stage costume change in the process.

She then proceeded to dump a 7-year-old Calvin Harris and get into a Twitter fight with toddler Demi Lovato.

If child versions of Hollywood elite are something you're into, I suggest you check out Toddlewood, a full Instagram account devoted to making replicas of A-listers.

Here is a kid version of Chrissy Teigen and John Legend.

Citations: This Little Girl Is Taylor Swifts Mini Me Its Everything (Refinery29)