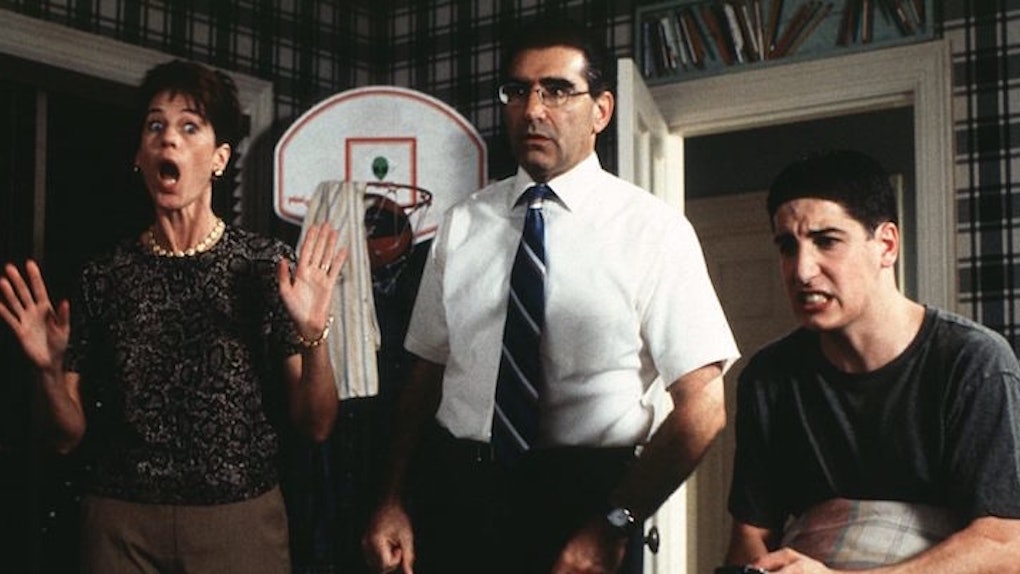 The 21 Most Awkward Movies We've Watched With Our Parents

It's the tail end of the holiday season. The presents are unwrapped, the visions of sugar plums have retreated, and many people are still aimlessly hanging around in the hometowns they fled years ago, slightly depressed and bored as hell. Time to watch a movie with the fam!

Oh, wait, except no matter how innocuous you think your choice of film is, it inevitably turns out that there is some kind of horrifyingly explicit sex scene in the middle that you must endure while wedged next to your dad on the couch.

Like many others, I first experienced "Pretty Woman" in this awkward manner, until my mom just started fast-forwarding through the sex scenes. It wasn't until I was an adult that I found out what happens on that piano. (Meanwhile, "Grease," with its references to "gang bangs" and "p*ssy wagons," is still shown to preteen girls everywhere like it's no big deal.)

Whether you're 12 or 30, you can always experience the uniquely cringe-worthy feeling of being trapped in explicit movie hell with your family because you thought "Human Centipede" was a nature documentary.

A few of our horror stories below:

I somehow convinced my dad to take me to see the movie when I was 13. He had no idea what it was about, and I also had no idea it was going to be so raunchy. (I think I probably read a blurb about it in Seventeen or something.) He was pretty uncomfortable from the get-go, not laughing at ANY of the jokes and kept fiddling with his glasses. When Jason Biggs' infamous pie-f*cking scene happened, he just silently got up and left the theater and didn't return. When the movie was over and I left the theater, he was sitting in the lobby reading a newspaper. We didn't speak, just walked to the car and drove home in complete silence. We never spoke about the movie ever again.

My dad and younger brothers and I saw the first "American Pie" movie in the theater... When Jason Biggs was about to hump the pie, my dad said really loudly, "OH NO, PLEASE, NO!"

Like many young men of my generation, it was "Titanic"/Kate Winslet's boob.

"Titanic" with my dad. Because I was eight, there were boobs, and he learned his son cries during movies.

3. "There's Something About Mary"

"There's Something About Mary" with my dad. The hair gel scene. I tried to melt into the couch and disappear.

We're Indian, and stars didn't kiss in Indian movies until about 10 years ago. Gere eating out Roberts was too much to handle. My dad got up and left the room when they were screwing on the grand piano.

I learned what a condom was from watching "Pretty Woman" with my mom. I was probably eight? I'm not sure why she let us watch it in the first place.

6. "Blue Is The Warmest Color"

I have THE WORST! My mom and I went to see "Blue is the Warmest Color" together IN THEATERS. I knew nothing about it except it was a lesbian love story. I thought it would help her understand/accept me, and it backfired with a hardcore sex scene. But it did give me a good education on actual scissoring.

7. "A Clockwork Orange" and "Pulp Fiction"

When I was 18, I rented "A Clockwork Orange" and my step-dad was like, "Oh, I remember I liked this movie!" and sat down to watch it with me. Then two minutes into it, we both looked at each other, turned off the television and never talked about it again. Also, my parents rented "Pulp Fiction" for us to watch as a family when it first came out on video when I was 12. As the Gimp was being pulled out of the box, my mother said, "If you don't want to see it, then close your eyes and shut up."

My dad walked in on the exact second in "The Notebook" where they were f*cking in the car. So that was fun.

Just with my dad though. We had to alternate making cups of tea each time there was a sex scene.

Watching "Wolf of Wall Street" with my Orthodox Jewish father might be my winner. We each separately mentally decided somehow that as long as we pretended like it wasn't awkward it wouldn't be, so we just sat there in silence for three hours.

It was a TV show, but I watched a couple episodes of "Dexter" with my parents over the holidays a few years ago. The episodes where Dexter and Hannah were having all the sex, Dexter's bare ass everywhere... we all just sat in awkward silence. No more Showtime dramas with Mom and Dad.

I watched the shrinkage episode of "Seinfeld" with my grandparents. Does that count?

My parents forgot that "Shakespeare in Love" was inappropriate for a six- and eight-year-old, and then made my sister and I cover our eyes when the sex scenes started.

My dad was a filmmaker and professor, so he thought he was being educational. Nope, nope, nope.

Oh god, "The Cooler." I cringe to this day thinking about it. There's a pretty intense sex scene in it that just does not fly when you're all huddled in the living room, in front of the fire, your mom knitting in the corner.

I came out to my dad while we were watching "The Color Purple." Right before the lesbian action.

I remember my mom saying "Blehh!" and walking out at that moment.

My parents were really liberal about what my brother and I could watch. As long as they were watching it, we could watch it with them. And they knew this wasn't really considered normal because their one restriction was that we weren't allowed to tell other kids about the stuff we saw that we probably shouldn't. And it all worked out, except for one movie where things ended up getting pretty weird. When I was around nine or 10, we went to the video store and found that it was completely cleaned out of big new releases, so my dad searched around for something out of our radar that looked good based on the cover. What he found was a movie that looked like a low-budget version of "Raiders Of The Lost Ark called "The Perils Of Gwendoline In The Land Of Yik Yak." What Dad did not know about this film (which was a French production that starred famed Whitesnake video vixen Tawny Kitaen) was that it was the latest film by Just Jaeckin, the French softcore filmmaker most famous for 1974's "Emmanuelle." Now this alone made it a poor pick for a family viewing experience, but what made it worst was that the film was based on a comic strip called "The Adventures of Sweet Gwendolyn" whose entire focus was in presenting its title character in increasingly kinky bondage and S&M situations. It took awhile for us to catch on to this, though, since the film takes its time getting to the really kinky stuff, with the first two-thirds playing like a slightly sleazy, but standard Cannon-style adventure movie of that period (I was honestly bored and spent a lot of time playing around with some toys). It was only when Gwendoline (Kitaen) and her cohorts get captured in what I can only call "Bondage City" that we realized what we were really watching. Around the time the heroes engage in a chariot race with the villains in carts being pulled by slave women, my mom finally stopped the tape and ordered my brother and I out of the room. Then her and my dad finished watching it. And a couple years later they rented it again, but this time they didn't let us watch it with them.

Tell us: What's the most awkward movie you ever watched with your family? (Was it "Titanic?" You think you're getting a perfectly wholesome family film about the death of thousands of people and instead you get BOOB.) Please be specific about how exactly you were scarred for life.