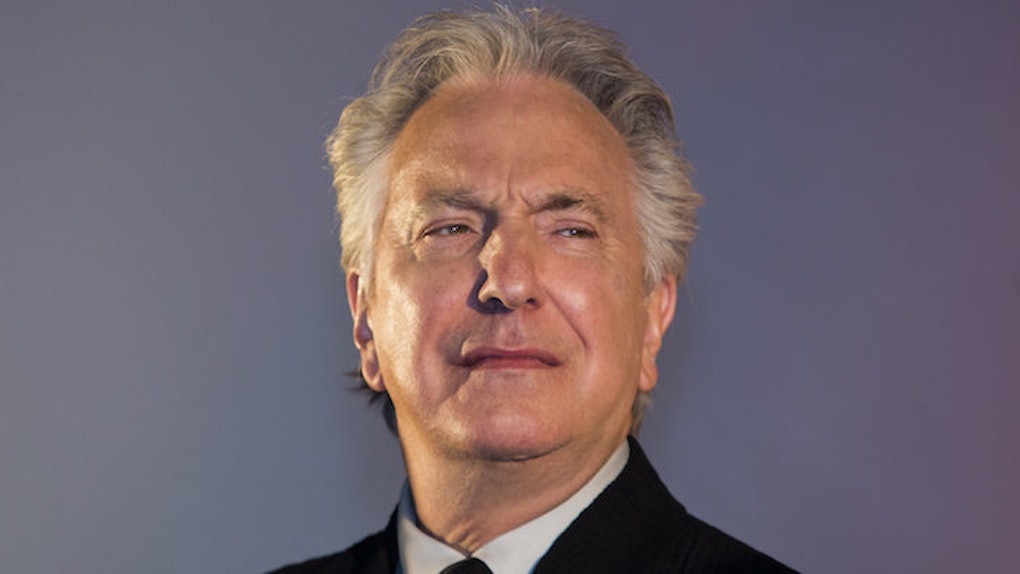 Why Alan Rickman Was So Good At Being So Bad

Alan Rickman was great at being a terrible human being.

Let me clarify: Alan Rickman was the best at playing awful people. I don't mean Alan Rickman, the man, was a bad person. I'm sure he was a great guy in real life, and based off the stories we've all read today from those who worked with him, Rickman was the kind of experienced presence writers, directors and actors cherished on set.

When you went into a movie knowing Alan Rickman was playing the villain, you KNEW you were going to be furious at him in a matter of minutes.

He took the idea of playing a story's antagonist and turned it into an art form. It seemed natural to him. His God-given brooding voice and generally dark aesthetic flowed through his body in the same way John McClane creeped through the ventilation shafts of Nakatomi Plaza in "Die Hard."

The weird part was he somehow made you hate him and love him at the same time. He mastered the concept of being subtly evil in a way that was both charming and revolting. Oh, you 100 percent disliked Rickman as Hans Gruber with a passion normally reserved for ex-lovers and college debt payments, but you also totally had a weird crush on him.

He was like a one-man game of F*ck, Marry, Kill. Would you want to have sex with Alan Rickman, marry Alan Rickman or kill Alan Rickman?

Yes. Yes to all three.

Arguably, he'll be remembered mainly for his portrayal of Severus Snape, the seemingly evil professor who hated Harry Potter so much, it was like his character was introduced into the series with the sole purpose of making Harry's life a living hell. That was the case until we all found out Snape's real purpose at Hogwarts and how his goal was actually centered around helping Harry, powered by his love for Lily Potter.

Alan Rickman was, of course, cast to play this incredibly deep role and, of course, he did a transcendent job.

Before Severus Snape, Alan Rickman was more commonly known for playing Hans Gruber, the German terrorist and evil mastermind behind the hijacking of Nakatomi Plaza in "Die Hard."

Gruber was a massive dick in the movie, but also super smooth -- a charismatic and endearing assh*le, if such a thing exists.

He brought a rhythm and style to the concept of being a prick that was infuriating and captivating at the same time.

When Gruber died after falling off the side of the Nakatomi building at the end of the movie, you naturally cheered with everyone else in the crowd, but somehow you also sort of missed him.

Yes, Rickman's character was an awful human being, but also you were probably like, “Hans, stahppppp,” the whole time.

In “Love Actually,” he played a cheating husband whom you somehow ended up feeling bad for. His character's wife figured out he bought a necklace for his possible mistress while giving her only a CD with a cute note, and you still left the movie going, “Man, I hope everything works out for Alan Rickman's character."

How is that even possible?!

Even when he was playing technically good characters, he still was able to make you think they would be terrible to deal with in real life. You loved him, but also wanted to knock him over the head with a two-by-four.

Remember “Dogma”? Rickman was the voice of God (aka Metatron) in that movie, and he was SUCH a dick, a smarmy know-it-all dick who could not have been less interested in helping humans. Earth was a job to him, and he was the d-bag coworker nobody at work wanted to deal with.

But, Metatron was good nonetheless and, like, also super cool. He was the kind of guy you would easily take verbal abuse from while trying to simultaneously impress him because you wanted him to like you.

This combination of disinterest and unbridled devotion Metatron had in the movie was genius, and you probably couldn't get enough because that was the kind of actor Alan Rickman was.

For Christ's sake, he made you get misty during that death scene in "Galaxy Quest"! THAT MOVIE WAS TERRIBLE AND HE PLAYED A TERRIBLE CHARACTER IN IT, YET YOU STILL ALMOST CRIED WHEN HE HELD QUELLEK AFTER QUELLEK GOT SHOT.

The world is a little emptier today. There will never be another lovable assh*le quite like him.