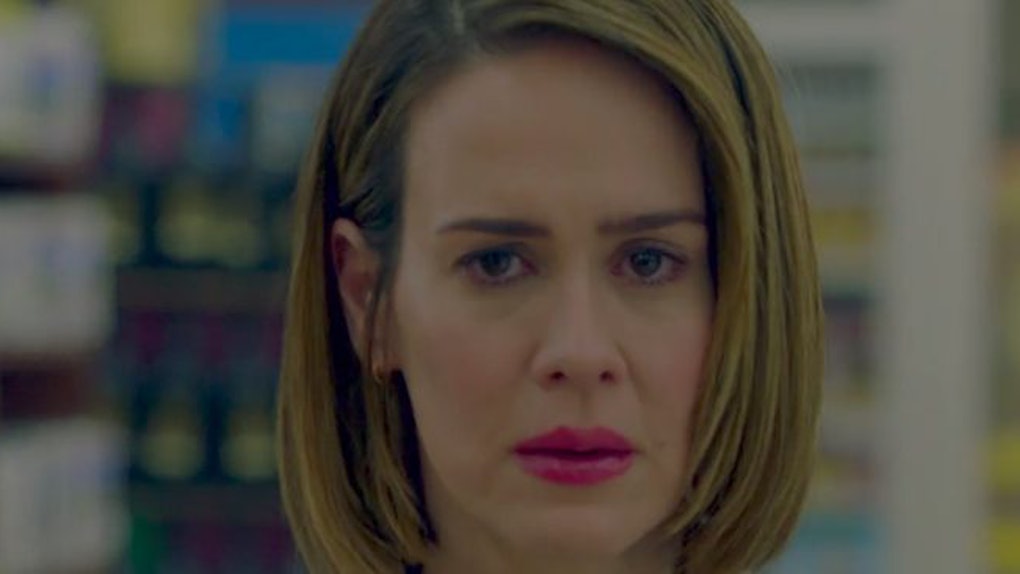 Another American Horror Story episode, another creepy mystery for haunt our nightmares. The latest episode of AHS: Cult gave us more horrifying clowns, more unsettling Evan Peters faces, and a pair of game-changing murders that could turn this whole season on its head. Spoiler alert: This post will discuss details from the second episode of American Horror Story: Cult. At the end of the episode, Sarah Paulson's Ally and Alison Pill's Ivy respectively find themselves in front of some dead bodies fresh from the butchery — Ally stands over the newly killed employee Pedro and Ivy bumps into the frozen corpse of her sous chef hanging in the meat locker. Although it's not exactly a sad moment to see Ivy's sous chef swinging on that meat hook since we saw how racist he was being towards Pedro earlier in the episode, his gruesome murder does leave AHS: Cult fans wondering just who might be capable of such a macabre killing. First let's recap what happened and then get into some theories about what might be going on.

So, at the start of the episode, we meet the employees that work at Ivy and Ally's butcher shop (side note: I'm very not excited about the main characters in a horror series owning a butcher shop), and it's clearly not a very harmonious work environment. Ivy's sous chef threateningly demands a line cook named Pedro to speak English in the kitchen, and Ally has to step in to stop the two men from getting into a full-blown fight.

By the end of the episode, both men wind up dead by very different means. During a blackout, the murdery clowns that have been plaguing Ally begin popping up around her house. In her distressed state, she fires her gun at a shadowy figure trying to enter her kitchen door, only to later realize it wasn't a creepy clown, but Pedro on his way to deliver some essentials to Ally. Back at the butchery, Ivy discovers an unexpected new slab of beef hanging in her meat locker, as she backs into the dead body of her sous chef hanging from one of the hooks.

While Pedro's murder clearly shows how Ally's story will turn on its head (as her name suggests, she had positioned herself as a progressive ally to immigrants, but has now murdered one in cold blood), it's the mystery surrounding the sous chef's death that's actually much more troubling. Of course, fans probably suspect Evan Peters' Kai Anderson first and foremost, since he's clearly being set up as the creepy antagonist of the season, but a brief glimpse in one of the season's teaser trailers may point to a less expected culprit.

In the teaser for the full season that aired after the American Horror Story: Cult premiere last week, some eagle-eyed fans noticed a blink-and-you-might-miss-it shot of Ivy and Winter in the butchery, and it was not a very comforting sight. The clip showed Winter mischievously watching on as a blood-splattered Ivy is grinding something up. And from the manic look on Ivy's face, I'm pretty sure that's not a USDA-approved beef, if you know what I mean...

So what's really going on here? It sure looks like Ivy and Winter are going to be teaming up for some nefarious, bloody reason in future episodes... were they somehow behind the sous chef's murder as well? It certainly would be an unexpected twist, given that Ivy's been presented as the stable, sane heroine in the series up to this point. We'll have to see how the fallout from the two murders shake things up.