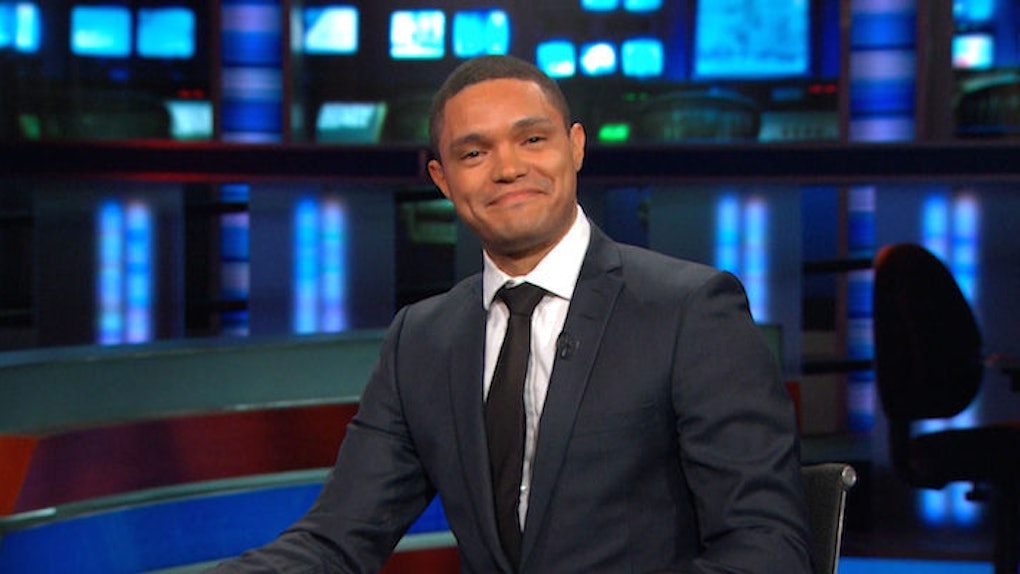 Earlier this year, Jon Stewart announced he was stepping down as host of "The Daily Show."

For nearly two decades, he made us laugh to the point of nearly needing an appendectomy.

When he announced his retirement, the world stood still for a moment as we all held our breath and thought, "Who could replace such a legend?"

Well, ladies and gentleman, today, that question has been answered with none other than Trevor Noah, which he confirmed today on his Twitter account.

No-one can replace Jon Stewart. But together with the amazing team at The Daily Show, we will continue to make this the best damn news show!

Sadly, some people aren't all-too-familiar with the 31-year-old comedian.

He was born and raised in South Africa during Apartheid. Now, just as a refresher, Apartheid was a law in South Africa that made it illegal for blacks and whites to interact with each other.

So, Kimye would've been illegal, as well as baby North, for example.

However, Trevor is a mixed-race baby, so he was just as illegal as say, heroin. His mother was from the Xhosa community -- you know, that pretty cool clicking language. And, his dad is from Switzerland.

Anyway, we all know that mixing chocolate with milk brings about great things — like cocoa puffs cereal, yum.

And, it has also given us Trevor Noah, a comedic genius and a great replacement to Jon Stewart.

Don't believe me? How about some jokes of his:

"Are you really reading my Twitter bio? Why? Do you even believe these bios? Ok well I'm sorry I wasted your time not writing one...wow you're still reading!?

"Ok, so, America is attacking Syria for the chemical gas thing, but who's attacking America for the Miley Cyrus thing?"

"In France, 1.6 million people marched for 12 cartoonists, which is great. But, by that math, the whole world should be marching for Nigeria. Sometimes it just feels like Africa is the Vegas of Islamic terror: What happens in Africa, stays in Africa."

“My mom would be arrested; she would be fined and still she was like, ‘Ooh, I don’t care, I want a white man, ooh.' And, my dad was also like, 'Well, you know how the Swiss love chocolate.'"

"My father was white. So when I see a white person, I don't automatically think, 'Bad guy.' I think, 'He looks like my dad. Maybe he'll buy me a bike.'"

"Black Americans are so cool and confident; they'll make you feel good about yourself just by asking if you are you. It's magic. They just walk up to you and go, 'That's you? That's you?' And you'll be like, 'Yeah I think it is.'"

"You have to work a bit harder to offend me because I'm from the home of some of the best racism in the world. I'm a snob when it comes to racism. You gotta do your thing. Don't just think you can throw a word at me and that's it. No dogs? No tear gas? Nothing? Just a word? Come on, put your back into it! Give me something. I have no time for that."

So congratulations and welcome, Trevor Noah!