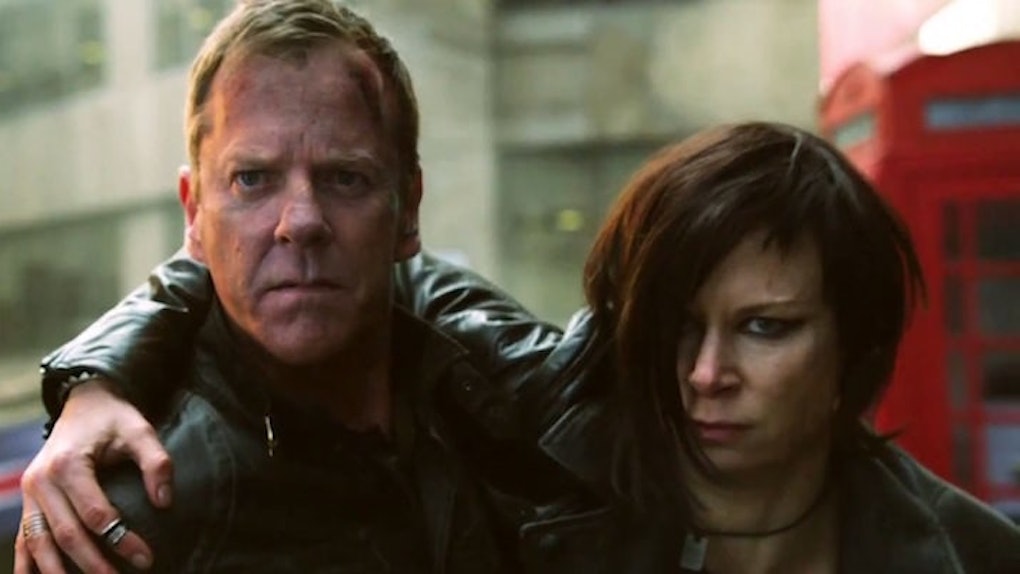 Die-hard "24" fans were thrilled to hear about the return of television’s most beloved and iconic leading male, Jack Bauer.

Well, they were happy until they realized the latest series is not actually a reboot.

Rather, it's a spin-off series, and their beloved Jack Bauer is nowhere to be found.

Fans are in a slight panic, and they are voicing their concern across social media.

In fact, the entire cast will be new.

Not even quirky Chloe, played by the awesome Mary Lynn Rajskub, will return.

But we should be excited, damn it.

We should be very excited because fans are actually getting what they asked for.

A continuation of the "24" series is finally happening, and fans should be holding on to the potential for the same action-packed episodes and impeccably written characters.

The season conclusion of the actual reboot, "24: Live Another Day," left things a bit open-ended, as Jack Bauer was carted off to Moscow.

This deal was made at the expense of Jack’s freedom, but for the promise of freedom, safety and happiness for Chloe and Jack’s family.

We were left not knowing exactly what would happen to Jack or Chloe.

But in life, our own stories are often left open-ended.

All we can do now is hope for what already seems like an exciting continuation of the "24" series.

If you find yourself immensely unenthused and pessimistic, here are a few reasons you should stop whining and get excited:

1. Jack Bauer will finally have time to eat and use the bathroom.

Yes, to the dismay of many diehard "24" fans, Jack Bauer will not be gracing us with another 24 hours of his time.

Actor Kiefer Sutherland is calling it quits on the series for now, and he is taking a well-deserved breather.

Grief-stricken fans have taken the web by storm, voicing their strong opinion that "24" will just not be the same without Jack.

But, fans might want to stop and think about the reality of the situation.

Kiefer Sutherland just needs a break from the role.

He has spent so many years completely embodying this character. The job is not easy.

Think of playing the same character consistently over the course of nine seasons, with 24 episodes in each season (with the exception of the 12 episodes of "Live Another Day").

That’s a hell of a lot of hours spent toward the creation, development and exploration of one character.

It’s an action-packed role, and it’s stressful, both mentally and physically.

From a production standpoint, think of the amount of Kiefer’s time that has been put into fostering this character.

I think a part of Jack Bauer will always live in Kiefer Sutherland.

But for now, let the actor focus some time exploring other characters and stories, like playing the president  in ABC’s upcoming conspiracy drama, "Designated Survivor."

I have hope for the success of "Legacy."

I hope that true "24" fans will accept the new series for what it is: a continuation of "24" with a brand new cast.

After all, the series is called "Legacy" for a reason.

2. The casting is on fire, and you should be excited for it.

Fans have expressed their concern that new leading man, Corey Hawkins, is “too pretty” to be the new Jack Bauer.

They think he’s not rough or tough enough.

Have you people not seen this guy act? He’s incredible.

He's a graduate of Juilliard, and he definitely won't disappoint in his performance.

Have you also not watched "The Walking Dead?" Have you not seen "Straight Outta Compton?"

The guy is an actor, after all.

What would an actor be if he can't make us believe he is someone other than who he actually is?

Hawkins will play Eric Carter, a former Army Ranger who finds himself seeking help from the CTU after his past comes looking for him.

Have you seen actress Miranda Otto in action? Have you watched "Homeland?"

The woman is fierce, and you will not be disappointed.

Now married to Senator John Donovan (not yet cast), she struggles with the realization that maybe she shouldn’t have left the counter-terrorism agency in the first place.

The paragraph above gives us the promise of another great, classic "24" storyline.

So, the cast is different. Big deal.

We can rest assured the writers will still deliver.

3. Have no fear, for the same writers are still here.

They will continue to write and produce the series, should it be picked up for an official season order.

Rest assured, the writing and producing staff will deliver nothing short of an action-packed hour of television with each episode.

They haven’t left us disappointed yet.

After nine successful seasons of the show (and one movie), we are sure to expect the same epic storytelling for "24: Legacy."

It’s also been said that Kiefer Sutherland may still be attached creatively in some capacity to the project.

So, "24: Legacy" is in the best of hands between the producers and the talent.

We should just stop worrying.

True fandom exists around more than just the idolization of a character.

True fandom exists within the realm of the world these writers, producers and actors create.

Can you call yourself a true fan if you stop watching just because Kiefer is not involved?

A true fan would continue to watch, knowing that the real-time format will not be lost, split-screen drama and all.

The show might have a different cast, but the world and situations these new characters are put in will be a continuation of the same kind of excitement and thrill we get from watching an episode of "24."

"24: Legacy" will not lose its gumption or charisma.

It will definitely not lose that action-packed, pressed-for-time mojo that makes "24" what it is.

I do, however, know one thing for sure.

We can only hope to hear again that otherwise annoying as all hell, joyful sound of that iconic ticking clock.