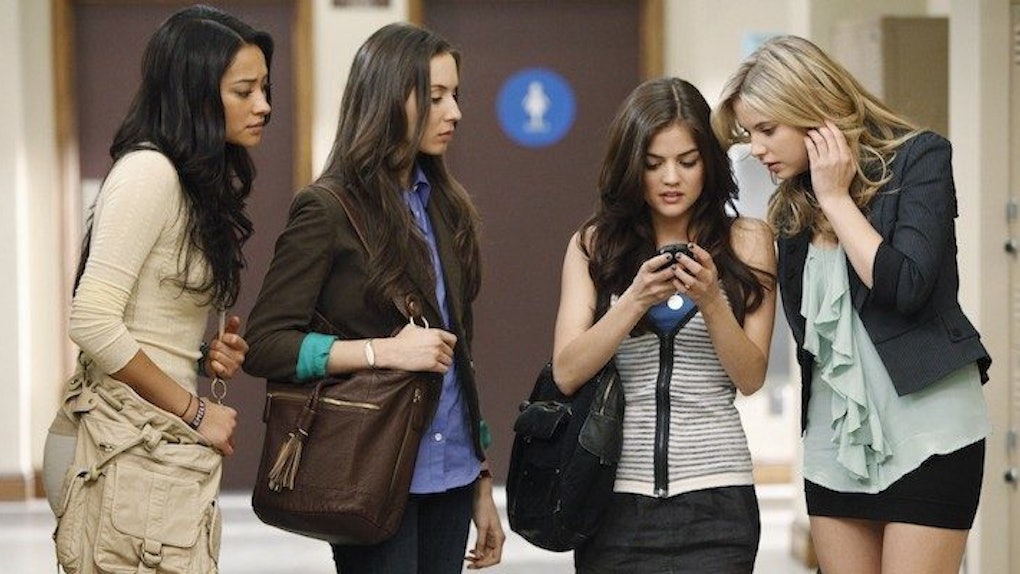 "Pretty Little Liars" is one of those shows you started to watch out of curiosity, either when it first aired in 2010, or when you noticed all of the previous seasons were available on Netflix.

An ABC Family show about murder, mystery and, apparently, a plethora of makeout sessions? Sure, why not?

The first two seasons of "PLL" were so legitimately suspenseful. I belonged to the Netflix camp of viewers, and I tore through the first couple of seasons in a matter of days.

I even made it a point to get my long-distance bestie hooked on the show at the same time. Without exaggeration, we spent hours texting back and forth, comparing theories, looking for clues. It became a part-time job.

There's no doubt "PLL" has taken a hard turn into Crazy Town with their more recent seasons.

Their ever-changing antagonist, "A," has basically become more skilled than Batman, and the girls pretty much never go to school anymore, yet are somehow getting accepted into colleges.

Even with all the batsh*t plot twists, however, we cannot take our eyes away. We are loyal in spite of ourselves.

Here are 10 reasons why "Pretty Little Liars" will hold you captive all the way until its series finale, should the day ever come:

It would be hard not to lead with this one. There has been so much buildup surrounding the mysterious number one villain. Every time you think you know who "A" is, the game changes.

Originally, the show's creator, I. Marlene King, told us we wouldn't know the true identity of Big A until the very last episode.

However, that all changed with the recent promos for the upcoming March 24 finale, teased with the caption, "Big A Reveal."

All signs are pointing to us finally learning the identity of this masked psychopath, and there are some pretty compelling theories out there as to who it might be.

2. So much eyebrow game inspiration, so little time.

I don't know about the rest of you, but every time I watch this show, I feel inspired to break out my tweezers and eyebrow palette and get to work.

It's not even just the ladies who have their brows on fleek. Cody Christian, who plays Mike Montgomery, definitely has better eyebrows than most girls I know.

Skulls, animal prints and animals (usually cats) are commonly found printed on her clothes. I'm not going to lie; there have been a few times when I've found myself thinking, "What would Aria wear?"

I'm not the only one, of course, as there are dozens of blogs dedicated to Miss Montgomery's fashion.

Her lipstick is especially envy-worthy, and her character is a big fan of bright colors.

The bold lip trend is huge for spring, and Hanna is the perfect poster girl for hot pink lips. It's enough to make anyone run to their nearest Sephora and splurge.

If you're ever questioning whether the ombre hair trend is over, just one episode of "PLL" will have you reaching for the bleach.

Both Aria and Emily are sporting two-toned locks recently, and the two brunettes pull it off well.

No matter what your type is, there's someone to appreciate on this show. Perhaps, you love a guy in uniform, which might make Toby your man. Or, if you appreciate the dark, handsome, pseudo bad boy, you're probably drawn to Caleb.

7. If you look hard enough, the show contains some powerful messages.

It has to be acknowledged that the four main liars aren't exactly the best role models all of the time. Like, why won't they just tell an adult about what's been happening to them?

Also, why is it so hard for them to date people their own age?

That said, some major props have to be given to the show's writers for their detailed attention to Emily's character as she becomes more confident in her sexuality.

As someone who works with teenagers who definitely watch this show, I think it's pretty awesome they're watching this beautiful character explore and learn who she is.

8. The soundtrack is pretty sweet.

Starting with their catchy theme, "Secret" by The Pierces, "PLL" knows how to do music.

Every week, each episode is filled with an array of cool songs to jam out to. If you have a "PLL" playlist in your iPod, it's probably filled with Barcelona, Depeche Mode and Brooke Annibale.

9. There are some pretty hilarious recaps out there.

If you aren't reading Betches Love This, what are you doing with your life?

Their weekly "PLL" recaps, while definitely harsh, are absolutely hysterical.

You'll find yourself scrolling back through previous seasons to find old write-ups, just to better understand their funny nicknames and phrases.

10. The "PLL" writers have a great sense of humor and community.

This show is full of quirky one-liners that are totally tweet-worthy, like the time Aria muttered, "I'd rather dance on a pile of dead monkeys."

Furthermore, the show has a huge social media presence.

"PLL's" official Twitter account has 2.63 million followers, and they encourage fans to live-tweet with each episode by suggesting themed hashtags almost every 15 minutes.

Every week, different cast members join in on the Twitter action, allowing fans to interact with their favorite characters.

"PLL's" production team is smart this way. The fans' experience doesn't just stop at the end of an episode; there's an entire world to be explored online.