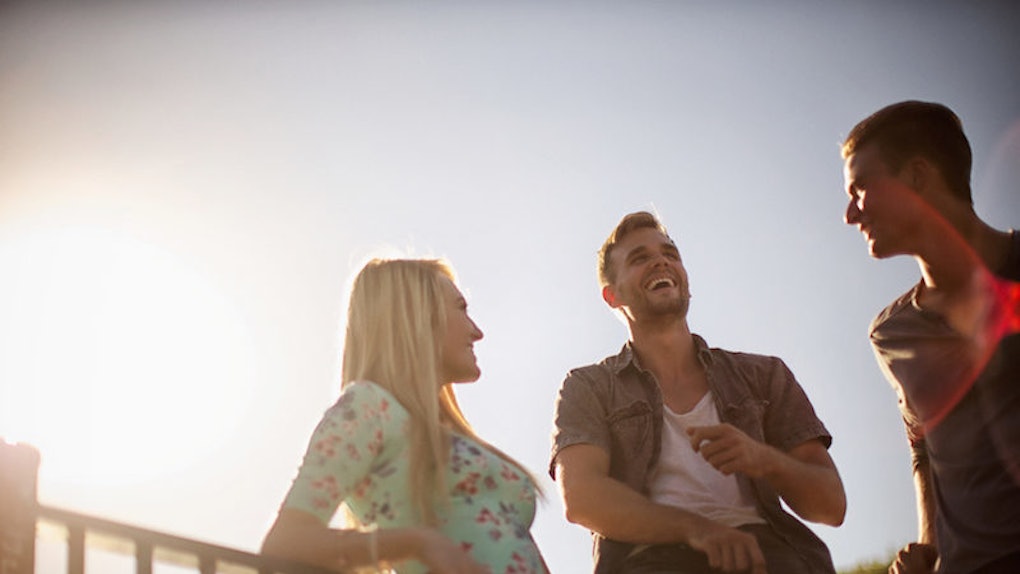 9 Reasons Why Women Should Date Several People At Once, As Told By A Man

One of the most controversial ideas I teach in dating is to go on multiple dates, with multiple guys, before you become exclusive with anyone.

It's a controversial idea, but it's also one of the most successful.

If you want to supercharge your dating life and give yourself the best chance of meeting Mr. Right, here are 9 rock-solid reasons multiple dating works.

1. Science has proved it balances the chemicals in your brain.

If you move too quickly from one partner to the next, you often risk making a poor choice. This is a real problem — not to mention, a significant time waster. It's the best way to make the worst decision of your life, and your brain is wired to do it.

Have you ever been on a date and found that you can remember every tiny detail (like how he held your hand, or what he said) but still not be able to recall what you had for dinner yesterday?

It focuses your attention intensely. It drives you towards things you desire. It sends the pleasure receptors in your brain into a very happy overdrive.

And it's directly associated with almost every form of clinical addiction in humans.

Studies have shown your dopamine levels skyrocket when you first fall for someone, even after just one date. Like a speed user, the more hits you get, the more you focus your attention and derive pleasure from their presence alone. It can even create positive perceptive illusions, literally blinding you to a new lover's negative characteristics.

Other neurotransmitters are at work, too.

Nor-epinephrine levels rise, giving you the 'high' and sleeplessness of new love, while there is strong evidence that serotonin levels in new lovers resemble those found in clinically diagnosed obsessive compulsive sufferers. We're literally wired, via several neurotransmitters, to focus and obsess on new love – even if it isn't good for us.

Dating multiple people flattens out these neurotransmitter peaks and troughs over multiple men. You'll make better informed, more rational decisions about partners who are worth your exclusivity.

2. It levels the dating playing field.

You can never assume exclusivity if it's not been stated.

If he has the knowledge you are single dating, without requiring the same from him, the "balance of investment" shifts against you. You're investing heavily in him, without asking the same in return.

Not only does your challenge (and therefore your attractiveness, in his eyes) decrease, you're putting yourself in a position to be more vulnerable to the dopamine swings than he is. It's an uneven playing field, and one on which you're likely to lose.

Most men take time — weeks or months — to decide they want to be exclusive with you. This dating pattern makes sense, as it gives him time to get to know you.

When you date multiple people, you're just leveling the playing field. It's not about being underhanded. It's simply having the self-respect to say what's good for him is, and always will be, good for you.

There's no reason you should be willing to give up the obvious benefits of multiple dating until you know him well enough to make an informed decision.

“To find a prince, you're going to have to kiss a few toads.”

Your chances of meeting "the one" increase with every new guy you meet and date.

When you get out there and multi-date, you make life happen at a faster rate. You're taking action, without being desperate. And life rewards action.

4. It helps clarify what you want in a guy.

Because you've balanced your neurotransmitters by multi-dating, you're now getting clearer, more rational observations of individual traits you like and dislike in men.

You might think you want X trait, but have you experienced it? You might find that, once you deal with it, you're not such a fan.

There may be other traits you thought you would hate, but which, to your surprise, you learn you quite like.

You never know until you try, and multi-dating gets you that experience faster.

5. It helps weed out many of the men you don't want.

Certain men, especially players or overly possessive types, cannot handle a woman multiple dating. They are happy to do it themselves, but when the tables are turned they quickly lose their mojo.

Their insecurities make them try to force you into exclusivity.

Rather than wasting a year with them before their insecurities force a breakup, you've achieved the same thing in a month. If you'd been dating them exclusively from the start, you would have missed out on this benefit.

6. You build social and flirting skills.

Social skills aren't just useful in dating. They're a key factor in self-worth and personal happiness. And multiple dating means you're going on more dates and honing these skills faster.

After you spend some time building your confidence multiple dating, you're flirting smoothly, even with the most attractive men. You radiate certainty and men flock to you like bees to honey. A guy may have five girls chasing him, but you'll be the one he's chasing.

Growing your social skills while you're single is a gift. Don't sacrifice this gift for a man until he's earned it.

7. Without trying, you challenge him in a way that actually works.

Playing hard to get is fake and is terrible dating advice.

When you multi-date, you naturally have less time for one man. You won't think about him as much. You'll challenge him, without trying, in a way that is natural and works.

He'll have to earn his way up your priorities list, challenging him in a way he's not used to. And he'll find it irresistible.

8. He is much more validated once you become exclusive.

We want to be the only guy who could have had you. Like it was our unique blend of charm and charisma that won you over in a way no other man could. That's how we feel safe with you.

When you have the exclusivity conversation and communicate to him that, while other guys have been showing interest, you only want him, you validate him massively. He thinks to himself, “She could have had them, but turns out, she only wanted me. Hah!”

The biggest resistance, by far, to the idea of dating multiple people, is that it's dishonest.

Remember, men are already in the "multiple-dating-unless-I-say-otherwise" bandwagon. You're just hopping on too.

Still, if these unspoken terms of dating continue to play on your conscience, there's nothing stopping you from being open about it.

Tell him, “I'm in a 'dating only' mindset, right now. I've told myself I would really get to know someone before I commit, so I'm holding myself to that for now. If you're supportive of that, I'd love to keep seeing you and see where this goes. If not, I completely understand.”

Or, if you want to be more direct, “What you do is your business, what I do is mine, and we'll see how we go. Sound fair?”

And your conscience is clear.

If you haven't been a multiple dater in the past, I hope these nine reasons help you see it in a new light.

Multiple dating not only grows you as a person in our ever more competitive world. By being willing to date a few people at the start, you massively increase your chances of getting the one you really want in the end.