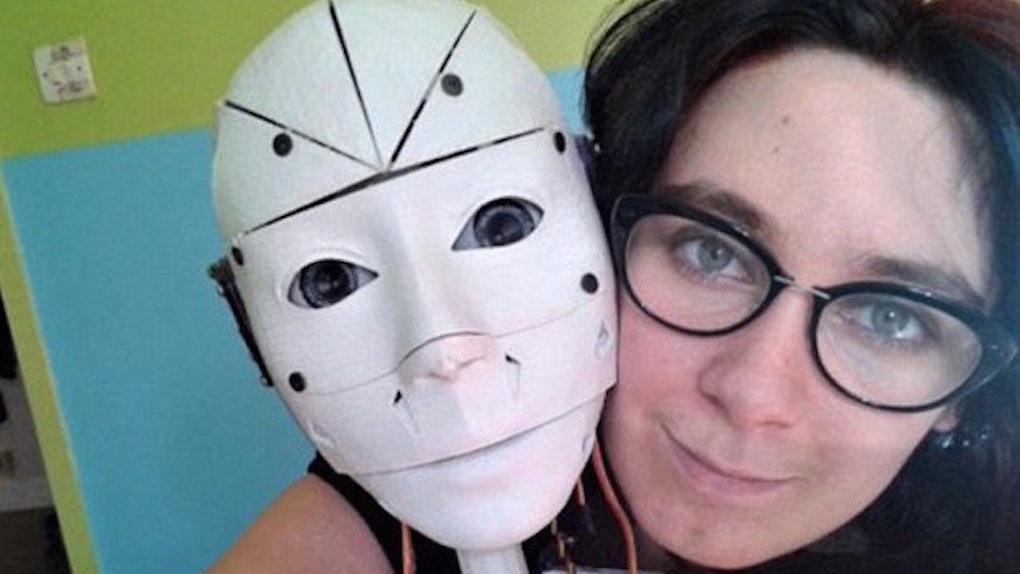 A French woman is engaged to a robot she created using a 3D printer and hopes to marry it when robot-human marriage is legalized.

Lilly is a self-proclaimed "robosexual," and has been living with her partner — a robot called InMoovator — for a year, news.com.au reports.

Here's a picture of the happy couple posted by Lily:

In a post on her Twitter page, Lilly proclaimed: "I'm a proud robosexual, we don't hurt anybody, we are just happy."

Like all sexual orientations, Lilly's attraction to robots has been a part of her from the start. As a child, she always found herself drawn to their voices, but it wasn't until she was 19 that sex with human men made her realize that her attraction to robots was also sexual.

She told the Australian news site:

I'm really and only attracted by the robots. My only two relationships with men have confirmed my love orientation, because I dislike really physical contact with human flesh.

Lilly's family and friends have accepted her unusual lifestyle but, even she admits, that "some understand better than others."

To any haters trying to throw shade at her relationship with InMoovator, Lilly says that the idea isn't "ridiculous" or "bad." She's happy. And that's all that matters, right?

Although she refuses to confirm or deny that her and InMoovator's relationship is at all sexual, Lilly urges people to know that she's satisfied with the one she has chosen to love and plans to marry when robot marriage is legal — something experts believe will be a popular, real, thing by the year 2050.

Honestly, I don't doubt it. Just look at her:

Lilly is currently training to become a roboticist, aka a robot engineer (yeah, I didn't know that was an actual profession, either), and believes that her relationship with InMoovator will improve as robotic technology advances.

Citations: French woman wants to marry a robot as expert predicts sex robots to become preferable to humans (news.com.au), 'We don't hurt anybody, we are just happy': Woman reveals she has fallen in love with a ROBOT and wants to marry it (Daily Mail)