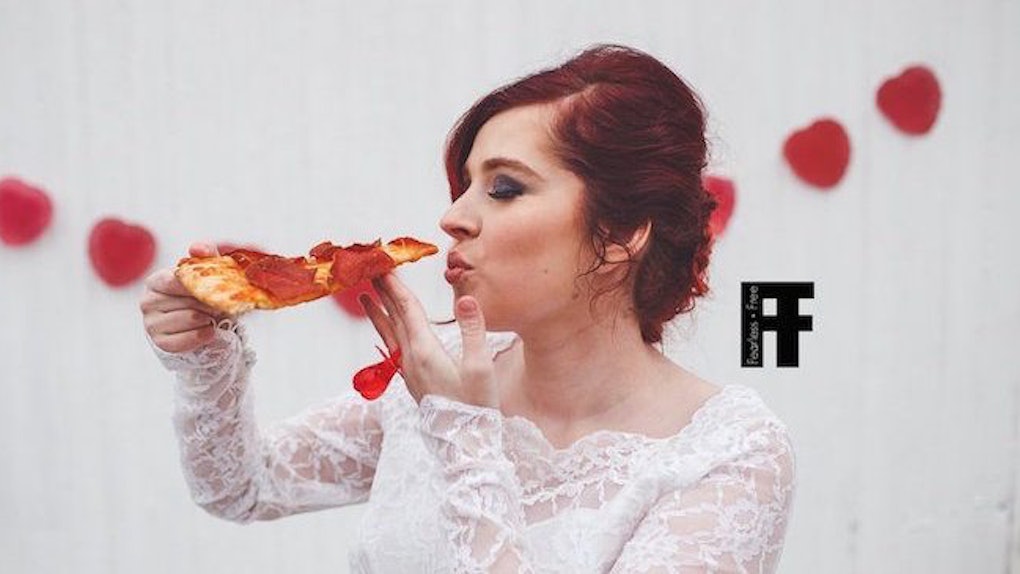 Just a few days ago, an 18-year-old girl got married to the person of her dreams... a slice of pepperoni pizza.

It all started when high school senior Christine Wagner posted a picture of herself dressed in her grandma's wedding dress on Facebook.

High school photographer Marcy Harris saw the Facebook post on her news feed and, as she explains in her blog,

Of course, the weirdo I am, was like 'This is awesome... We should totally get photos of you in this dress marrying a pizza...'

Wagner's mom gave the teen permission to do the shoot, and after that, it was GAME TIME, Metro.co.uk reports.

Over the next couple days, Christine and I planned her dream wedding. She had so many amazing ideas. Like the pizza should wear a bow tie... and the ring would obviously have to be a ring pop. We debated about having bacon roses, but because her mom was a bit worried about the dress getting dirty, we decided to stick with just a couple basic props.

The day of the shoot, they commissioned a pepperoni pizza from Wagner's favorite pizza place, Cristy's Pizza in Baltimore, to be the groom.

Just take a look at the happy couple on their big day.

The "wedding ceremony" took place outside of a white barn on Wagner's family farm.

Yes, her groom is wearing a Pokémon tie. SWOOOOOOONNNNN.

Next, the two lovebirds headed inside for a super romantic, candle-lit meal.

Just look at the LOVE going on in this picture.

I would give anything for someone to look at me the way Wagner looks at her pizza.

Finally, the newlyweds hit the bedroom for some much-needed snuggle time.

All right, we're all thinking it... I'll just be the first one to SAY it: I'M JEALOUS OF THIS GIRL'S RELATIONSHIP WITH A SLICE OF PIZZA.

Citations: This woman 'married' a pizza because she loves it so damn much (Metro UK), When your senior wants to marry pizza... | Conceptual Senior Photography (Fun + Fearless)