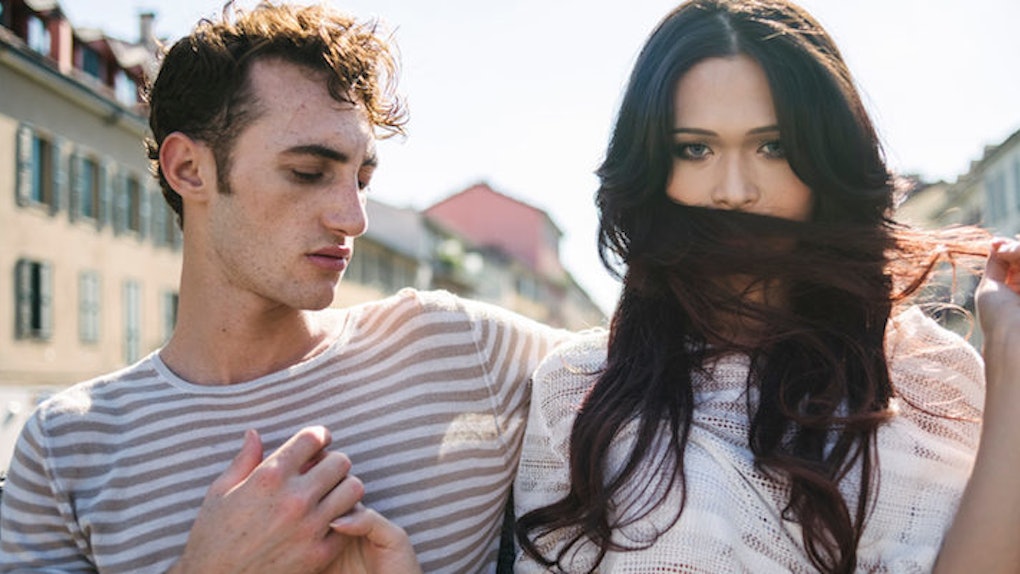 No New Men: Why We'd Rather Recycle Exes Than Find Someone Different

I walk into an ice cream shop. The shop doesn’t fall short of my expectations: It boasts every flavor I could ever invent.

There’s something for everyone. And just when I think I’ve found the most alluring option, another one pops out and surprises me. It’s as if one flavor puts the one right next to it to shame.

Large glass windows do their job in keeping the ice cream and the cones comfy and cold. It's hard to avert my eyes: All of the colors look so beautiful sitting side-by-side like that, effortlessly complementing one another.

I skim over the flavors, attentive to every delicious detail each one has to offer. Fully prepared, I’m ready to try something new -- but then I realize something. All of those flavors feel so close and yet still so far.

The shop wasn’t designed to disappoint. But there I stand, facing the world, feeling like it’s too big and scary to confront head-on.

There’s something to be said for what’s already been explored, tasted and tested. Mystery arouses me, but only just enough to pique my interest for a flashing moment.

Choice immobilizes me. I can’t help but dismiss all of the things I’ve never tried before. Finally, I made my decision: stick with the chocolate.

I’m a chocolate girl, and I always have been. Plain and simple. The thing is, just because I’ve always been one doesn’t mean want to continue to be one. But the facts are there. Chocolate has been a crutch. Chocolate always tastes the same.

Chocolate is familiar. Familiarity doesn’t always outweigh novelty, but in the arena of love, it does. Isn’t that what love instructs us to do, anyway? Succumb to a familiar intimacy we spent a long time building?

After I ended a relationship, I didn’t truly end it. I found myself letting him in and out of my life sporadically.

So I kept reaching for my old lover. I don't know if I stopped dating other people because I knew how easy it would be to reach for him, or if I reached for him because I stopped dating. Either way, the same questions plague me when I meet someone new: Am I “weak” for using him as a crutch? Is this a relapse?

He’s a used armchair -- the kind that’s all ripped up in the corner, collecting lint and hanging loose threads.

There’s foam spilling out of it. I know there are better armchairs in the world, but to find one and settle into it takes too much time.

I recycled my old lover as if he -- as if we -- showed no signs of wear and tear. Why do we recycle something old when we can get something new and free of charge?

Since meeting him, I haven’t met anyone else I like as much. This gives me too much space to ruminate on my past.

My body tricks me into remembering only the good parts of something that was almost entirely bad. In missing him, I tend to forget he isn’t really worthy of being missed.

It’s easier to fall back on old love than to invest energy in finding new love.

I can’t decide whether familiarity is a loyal friend or a pesky foe. Familiarity brings comfort, not fear. But at some point we need to confront that fear of moving on.

I’ve often heard it’s impossible to move on completely until we’ve fallen just as hard for someone else.

I’d rather keep him in my life than have no love life.

We stop ourselves from experiencing something good.

I feel I don't deserve a good thing until I’ve put myself through a lot of pain first. Pain is like a rite of passage.

But we’re not the only ones who interfere with our progress. Life does, too. We find our ex-loves peeking at us through the sidebars of our social media pages.

Scrolling through our friends' feeds (because we unfollowed them on ours) quickly feels like navigating a land mine.

Our memories are immortal.

It seems like people no longer cut ties. And even if they do possess the certain mental strength required, they cannot deem something “over.”

I’ve gotten rid of my ex’s number enough times to know it by heart; the digits have been tattooed on my body.

He’s always in the margins of my social media page, and he’s always marginally in my life.

I hope to move onwards and upwards. But that won’t happen if I keep moving backwards.