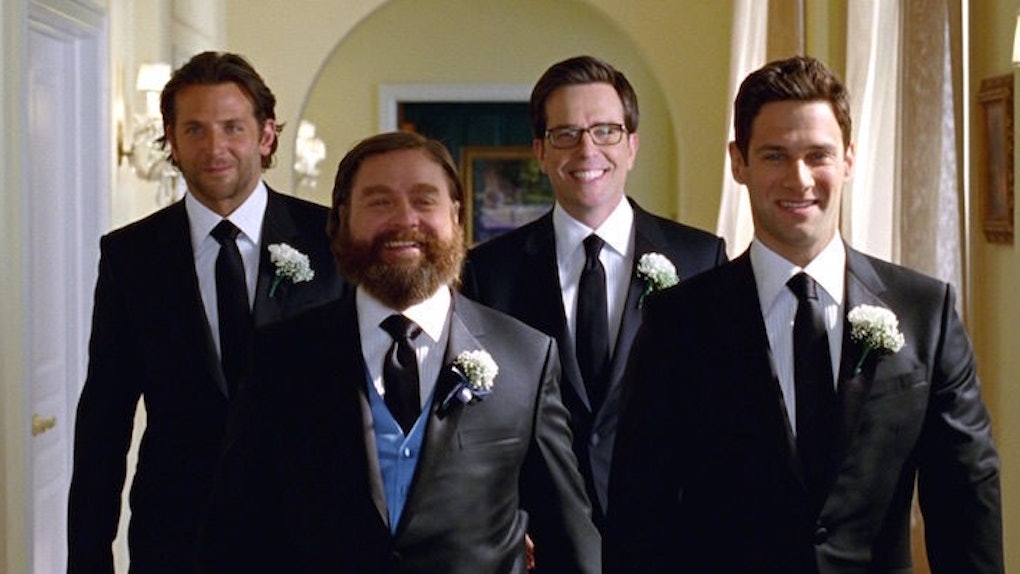 One may assume guys don't really care that much about weddings, wedding season and the overall celebration of love.

We are pretty occupied with the Tom Brady scandal, grooming our beards and hitting the beach.

Well, it appears a lot more is going on in the summer besides the beach. It's wedding season, and if one of your friends has gotten engaged, the initial shock of the engagement may not be that overwhelming because, as we know, engagements can always be called off.

I know for me, when I had a friend get engaged, I was very happy for him. But once you get to the wedding (with a hot date on your arm), there are so many thoughts running through your mind.

There's something about forever that can give love's biggest critic an anxiety attack, and that's what happened to me. If you are like me, you may have had some real realizations after seeing one of your closest friends get married.

Here are five thoughts that crossed my mind when I attended my friend's wedding in 2013:

1. I didn't know he knew all these people.

You will be amazed by how many people love attending weddings. I know I was very surprised to see almost 150 people at his wedding.

It makes you realize there are so many important people in your life, and it puts a lot of things about relationships into perspective.

For me, I had the realization that my "bro" was more than just a "bro." We are like family, and I couldn't have been happier for him on that day.

If you were ever concerned or vain enough to care about your age, there is nothing like a wedding to make you feel old. Nothing about a wedding makes you feel young again.

If graduating from college, renting your first apartment and finally getting your own healthcare plan wasn't enough, now by society's definition, you are a responsible, mature adult.

It's a very weird feeling -- the feeling you are slowly turning into your parents and life is happening at a pace you can't control.

3. There goes my friend.

Goodbye to the days of club-hopping with your single bro, sports night and weekend trips.

After my friend and his wife returned from their honeymoon, I tried to organize a simple guy's night out for some wings and was hit with the response, "We already have plans tonight."

From that moment on, I knew our relationship was going to change, and it was going to require I get used to it.

He is now a husband and with that comes the responsibility of putting his wife first.

Fortunately, for us, his wife agreed for him to have a guy's weekend every other weekend, so all was not completely lost.

4. You're going to be talking about "feelings" more.

You can also say goodbye to shallow conversations because your bro will start discussing his "feelings" with you more and more.

While there is nothing wrong with two guys talking about their feelings, it is a very different kind of conversation than we used to have back in college.

You realize your friend needs you, and now you have to be the one to listen and, dare I say, give some advice.

This may be hard initially because you are not married, but over time, you'll get better at giving him advice.

It's hard to imagine and believe we are at the age to legally get married, but we are. We will no longer be those single guys we were back in college, quick to hit on the same girl in a short skirt.

We will, instead, be heads of households, paying mortgages and maybe even parenting.

It's a very scary thought to have, but so much can change after college. It feels like you've entered the "real world" everyone has been welcoming you to since you first enrolled in school.

While I am personally not married, I am very happy in a committed relationship with a beautiful woman who, one day, I hope to marry. If marriage means maturing, becoming responsible, selfless, loving and gives you a partner in this crazy world, then sign me up.

Of course, your friendships will change, but I know for me, at the core we are like brothers, and that is something that will never change.