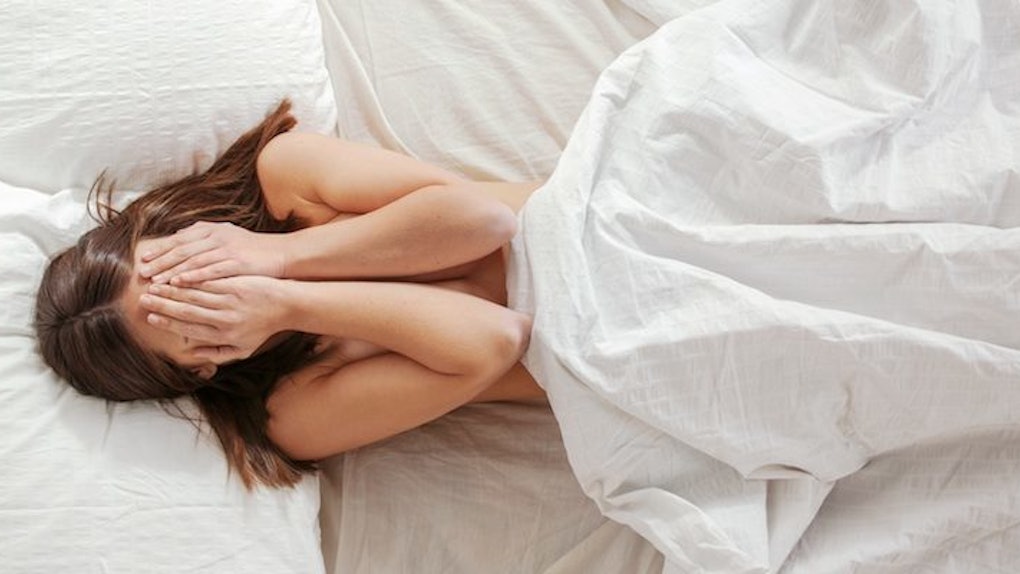 I got into a little bit of an argument with my friend the other day over the topic of peeing. OK, well it wasn't just peeing. It was peeing during a hookup.

His roommate's girlfriend had just peed the bed after they were done making ~love~ and his roommate didn't seem to think it was a big deal.

My friend was appalled by this.

“I mean, she PEED in his bed," she said. "And he did nothing! That is the weirdest thing I've ever heard. Not to mention so f*cking gross.”

But, you see, I don't think it was that weird at all. Like seriously. I think it's completely normal. Why? Because I feel like at least once a weekend of my college experience, I heard a different story about a different person being peed on. And every time it was hilarious.

So, here, let me share the joy of funny pee stories with you. And, also, let me prove to my friend that wetting the bed after a hookup is NOT THAT WEIRD.

1. When you took advantage of a messy situation...

“One time, after one of my more aggressive blackouts, my consistent hookup at the time and I woke up to find ourselves in a puddle of pee. It didn't take long for me to figure out that I was the one who had wet the bed. While he was still trying to figure out who was at fault, I quickly jumped out of bed and started making a huge fuss about how gross it was that he had wet the bed and how much of an inconvenience it was going to be for me to wash all my sheets.

He was so convinced that it was his fault and was so embarrassed that he washed all my sheets and took me to a really nice dinner if I promised to never tell anyone what had happened.”

2. When your pee serves as a symbol of your love…

“I once drank too much and wet the bed I was sleeping in with a hookup. He endeared himself to me by saying, 'I can't prove it was you. I could have peed on your underwear.' #romance"

“This guy I'd met recently came back to my place after going out. I woke up at five in the morning to a soaking wet bed and he was gone. No text or apology! He just left me sleeping in his pee! So gross.”

4. When you hurt the person you loved most…

“It was my freshman year and the first night of Halloweekend. My boyfriend at the time was driving up to visit me that night and I, naturally got blackout drunk before he arrived. I woke up the next morning and had to rush off to a community service event early in the morning. I came home hours later, get in my bed and realized that it felt like a water bottle had spilled in my bed. It wasn't a water bottle, and my bf didn't want to break the news that not only had I peed on him, but that he had been sleeping in it all morning unknowingly.”

5. When you chose your dignity over your belongings…

“After a long night of drinking with a guy, we decided to go back to his house to sleep. We started hooking up, and then I must have fallen asleep, because a few hours later I woke up and everything was drenched (I had peed). I immediately ran to the bathroom to try and clean myself up, leaving my keys, wallet and coat. Upon leaving the bathroom, I realized I hadn't paid attention to which room was his, AND each bedroom had its own door code. After some panicked debate alone on the couch at 4 am, I ditched everything, called an Uber home and decided to forget the whole thing ever happened. Needless to say, going back to get my stuff was pretty awkward.”

6. When his name should have been Cleopatra because he was Queen of DE-NILE…

“I had just had sex with a guy and we were in my bed snuggling. We fell asleep and I woke up a few hours later because I felt a warm, wet substance. The guy had peed in his sleep and it got all over my bed. I woke him up and he acted like nothing had happened. He got up and left and never spoke to me again.”

7. When he contaminated your makeup…

“One time I hooked up with this guy and we had gone to sleep. We were both wasted. Hours later, I woke up to find him scrambling to get up from my lofted bed. Somehow he ended up peeing all over my dresser, which was covered with my makeup and jewelry boxes -- all of which were now covered with and filled with pee. Needless to say we didn't see each other again after that.”

8. When people legitimately call you “The Human Sponge”…

“My friend and I had this thing going where we would hook up every time we got excessively hammered in college. Once, after a particularly hammered night, I woke up in his bed … in a sea of pee. Before I could get mad, he convinced me that it was my pee and that it was OK — it happens to the best of us. This lasted about four minutes until his housemates (our mutual friends) burst through the doors and told me it was actually his pee and this was his pathetic attempt at covering it up.

To them, it was the funniest thing to have ever happened and I did not live it down for an entire year …until I was hooking up with someone else and it HAPPENED AGAIN.

Unfortunately, he was in the same group of friends so word got around pretty quickly. And that, my friends/strangers reading Candice's article, is how I acquired the nickname 'Human Sponge.' And that wasn't a joke. That was actually my nickname.”

9. When you hooked up with Scarface…

Anyways, so my friend and I caught the drunk bus home (which is a bus that stops at all the college bars, picks up all those intoxicated “night owls” if you will, and safely transports them home to their respective dorm rooms), and we start chatting with two boys who were also equally as drunk.

My friend is chatting up the hot one. I'm clearly chatting up a guy that looks like Scarface. Being the pizza enthusiast that I am, I proclaimed at the top of my lungs “PIZZA PARTY AT MY PLACE!” Clarification: My “place” was a small dorm room with two twin beds. Unfortunately, the drunken crowd doesn't seem too enthused about the pizza party, so my friend, her hot boy, Scarface and I head back to my room to order some Dominos.

We pair off into our respective beds with our respective boys (because like COLLEGEEEEE). I'm starting to sober up and realize that I'm in bed with Scarface, so I pull the whole “I'm super-tired, lets just go to bed” move.

I fall asleep, and all is well. I'm in a REM cycle … probably having a swag dream where I own a yacht and 75 labradoodle puppies ... when all of a sudden I feel something warm on my back. I wake up and realize I hear streaming water, and my back is getting warmer … and wetter … and EW, HE WAS PEEING ON ME.

I screamed and rolled out of the bed. He was dead asleep and clearly unfazed. I tried to wake him but to no avail. I had no choice but to curl up on the floor, wet with pee and drenched in shame.

I fell back asleep only to be awakened by Scarface holding my sheets, my comforter, my mattress pad and my pillows. He kicked me and said, 'I peed your bed' before walking out of the room.

With my mattress pad. My sheets. My comforter. Everything. Do I know his name? Nope. Do I know where he lives? Nope? Luckily, when my friend's guy woke up, they happened to be friends.

So I had the joy of dragging all my bedding across campus that evening after he awkwardly left it in a trash bag outside his dorm room door.”

10. When it literally happened during your hook up…

“I was hooking up with a guy while I was abroad and I convinced him to have sex with me even though he was late for work. We couldn't find a condom, so I just told him to pull out since I'm on birth control and I knew he was clean. It lasted for about five minutes and when he pulled out to finish on my stomach he started PEEING.

I didn't realize it at first until it lasted longer than normal and it felt super watery and warm. I didn't want to embarrass him anymore than he already felt embarrassed, so I just rolled over and went to the bathroom to clean up and asked him to take me home.

I don't know what's worse: the fact that he made noises like he was finishing (aka he faked it) or that I was wearing my new white shirt which now had a yellow tint to it.”

* Name has been changed