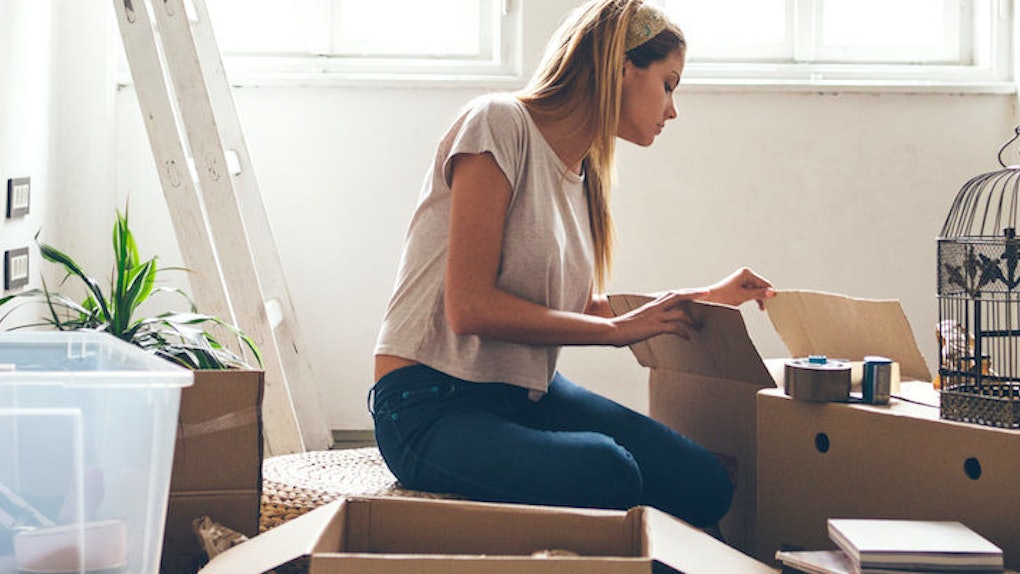 Runaway: I Only Used To Be Able To 'Move On' By Moving Away

“A change of scenery will do you good.”

This advice has been both the most helpful and the most misleading I've ever heard.

When I was 18, I fell in love. It was my first time falling in love, and it was also the first time I realized something so intangible could be so consuming.

The guy I fell for gave me hope. He showed me happiness. He taught me what it meant to love hard and live freely. The problem was that I didn’t know I was investing in empty stock.

When it ended, it didn’t just end. It crashed and burned. He chose someone else, and the betrayal was like no pain I'd felt before. The pain moved me, but I found myself unable to move on from the pain.

I felt like everyone else could find ways to live and let live. Everyone else could move on from heartbreak. But I couldn't -- not in a conventional way, at least. I ultimately decided I needed to transfer schools to pull out of my depression.

Unable to rationalize my thoughts to others, I told family and friends I was switching schools because the University of Georgia didn’t challenge me. But I was plagued with self-doubt.

There were so many other questions to consider: How did I know that the move was right? People move all the time to be with their men -- did the same rules apply to getting away from them? Did wanting a move make it warranted, or was my desire simply weak reasoning?

At what point was moving halfway across the country an unhealthy reaction to an unfortunate situation?

I have a love-hate relationship with falling in love. Who doesn’t? The moments leading up to the initial fall are invigorating.

The fall itself leaves you forever changed. But it’s what comes after the fall that strips us down and leaves us standing, vulnerable, in the cold.

When we fall in love, we feel that anything is possible. When it ends, we believe that a life without love is unbearable.

The truth is, when you invest everything you have -- and everything you are -- into another person, you will end up broken. Some people may break sooner than others. But a loss is inevitable. And it's not just a loss of love.

It's also a loss of identity and self-knowledge. He should not have had to teach me how to live; I should have figured out how to do that on my own. Because I didn't, I was left with nothing.

What caused me grief was an inherent flaw in character. I defined myself by him for one reason alone: I didn't love myself enough. I couldn't recreate a world without him. I didn't know how to -- at least not at the same school. And so I left.

To move on, I needed to leave the city that brought us together.

I let the heartbreak grow too big, and it shrunk my surroundings. But our heads will mess with our feelings only as much as we let them. What our hearts decide to feel is all up to our minds.

I was young. I know now that closure can happen even when we live near a former lover. Who we choose to be is up to us.

In order to start over, we need to start something new.

There’s a reason that we cut off our hair and replace our wardrobes after a breakup. We need to feel that losing one thing means gaining something else.

In some cases, buying something big enough for our hands to hold can be enough to sink our heaviest heartbreaks.

I let one man ruin an entire city for me. I boxed myself into the same unfair set of values and ended up with the same results.

The old me wouldn’t be strong enough to carry over into a new life. I needed to develop a new me, and that meant starting from scratch.

What leaves you rejuvenated and reawakened might not do the same for me. I needed to do something drastic.

Sometimes we can't move on because our loved one is simply that awesome. We're so blinded by this person's greatness that other opportunities seem invisible.

But they’re not. They’re just as present as the guy who cast his spell on you. He may have been one of a kind. But it’s a big world, and there’s room for more than just one one of a kind.

At the end of the day, we’re the only ones in our own way.