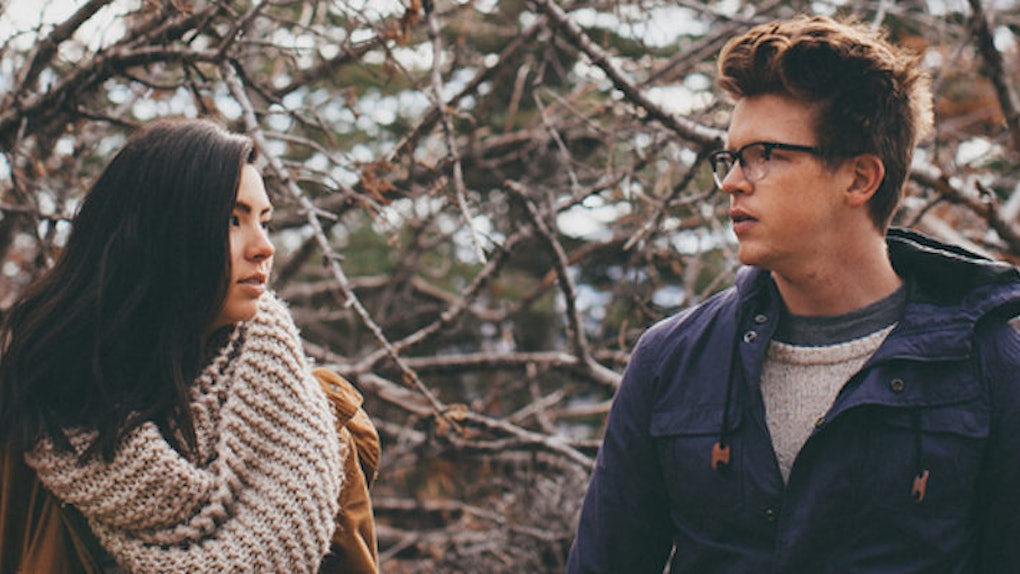 It was the beginning of any modern love story: On a random Thursday afternoon, we both swiped right on Tinder.

His profile encompassed everything I could've ever wanted in a man: 26-years-old (good age!), from Brooklyn (me too!) and looking for intelligence (I'm intelligent!), culture (I like culture!) and an interest in healthy living (saaaame!). Also, he was hot, with a perfectly crooked smile and symmetrical face.

When he messaged me, he said I look like someone who has her life together, which was "refreshing." And in response to the note in my profile that says I'd prefer someone who's taller than 5'9", he told me he was 6'3".

Already, I was feeling something.

So we exchanged numbers, solidified a date for the following Friday and began to text -- every single day.

I was floored by how comfortable and open I felt with him in mere days. He earnestly wished me good morning. He asked how my day was and seemed to genuinely care about the answer.

And the more we talked, the more we discovered we had in common: a fear of purposelessness, a love for comedy and rap music, an interest in current events, an aversion to organized religion and a thirst for knowledge about the meaning of life.

Though we hadn't yet heard each other's voices or met in person, the feelings we had for each other in that first week were palpable, each vibration of our phones catapulting them to new heights and setting my little hopeless romantic heart ablaze. We even friended each other on Facebook (and confessed to stalking each other, too).

I'll admit it was...a lot. My friends scoffed at how I could possibly think so much of a man who I hadn't even seen in the flesh yet. But I unabashedly embraced my affection for him and all the fantasies I was projecting onto the little silver bubbles on my iPhone screen, if only for the possibility of something real. Of true love.

He also seemed to be equally as obsessed with me. So it was a win-win.

On the night we planned on meeting in real life for the first time, I sat in the backseat of a taxi and tugged at the sleeves of my leather jacket, the one I'd worn to come off as cool and collected as possible.

When the driver pulled up to our meeting location -- a bar in the East Village --  the knots in my stomach unraveled and spilled into every crevice of my body. I hastily paid the driver and opened the door, my mind flooding with apprehensive thoughts. What if he doesn't look like his pictures? What if we aren't as compatible in person as we are via text? What if he smells bad?

A blast of cold air hit the surface of my nose, and I nervously adjusted my scarf to cover up any more exposed skin as I made my way to the front entrance of the bar. I was so jumpy that I let out a yelp when the bouncer asked for my ID.

The place was packed, stretching back for as far as I could see and fading into a dark, faceless mob of people. The walls were creamy white with black wooden trim, and tiny flickering candles sat atop the mahogany bar to my right. People were sitting on stools that lined the entire perimeter, drinking and laughing carelessly and animatedly -- a stark contrast to the quiet anxiety violently boiling in my gut.

I inched further inside and stood on my tiptoes to peer around for any sign of him, for any version of the photos I'd been fantasizing about for the past week, for the kind of guy who looked like he'd be into intense daily 12-hour-long conversations with someone he'd never met before.

And then, there he was. He smiled at me, and I approached him like a mosquito heading toward a bright, white lamp.

And the rest was history.

Well, for another week.

Finally, I caved. I texted him in what was the first time that I'd ever initiated conversation and asked if I was going to see him soon. And when he replied with "Yeah, can we talk soon?" I knew it was over -- whatever "it" was.

That night, he called me and told me he had a number of personal issues (that I knew about) that he had to deal with before he could bring someone else into his life. He said he knew we liked each other enough to the point that if we continued seeing each other, we would have officially started dating, but due to those issues he couldn't be ready for a serious romantic commitment.

I told him if he gets his act together, he can give me a call. He said he'd take me up on that offer. And then we hung up.

People often lament about how sites like Tinder are changing dating for the worse. They say if we have millions of options from which to choose, why would anyone take the time to establish a meaningful connection when you can just jump ship and find someone else in the blink of an eye?

It's true that you can, indeed, quickly sift through Tinder dates like you're browsing books at a library. But those two-week, seemingly blink-of-an-eye-style benders can actually be quite meaningful. Exhibit A: me.

I was pretty upset by this "breakup." The fact that I feel the need to put it in quotes is telling enough of how people dismiss your feelings if you didn't date someone for a significant amount of time.

But in our fast-paced, constantly-communicating world, two weeks spent Facebook stalking, sending selfies back and forth and engaging in all-day-every-day texting sessions about your hopes and dreams and how much you have in common can feel like two years. Even if you've only hung out in real life three times.

And your connection can deepen even faster if, at each meet-up, he continues to surpass the expectations you'd built of him in the days leading up to the meet-up. If he continues getting even better.

Like any other relationship, this one taught me what I want and what I don't want in a guy. And maybe I was honeymooning way too hard, but I really did see few things in this guy that I didn't want. And that, in itself, was a lesson: Maybe perfect really is out there, and this was just a taste of it to serve as a reminder.

The good thing is if this two-week whirlwind experience can happen randomly, from a right swipe on Tinder on an unexpected Thursday, then it can truly happen at any time. And that possibility is what I'm holding on to.