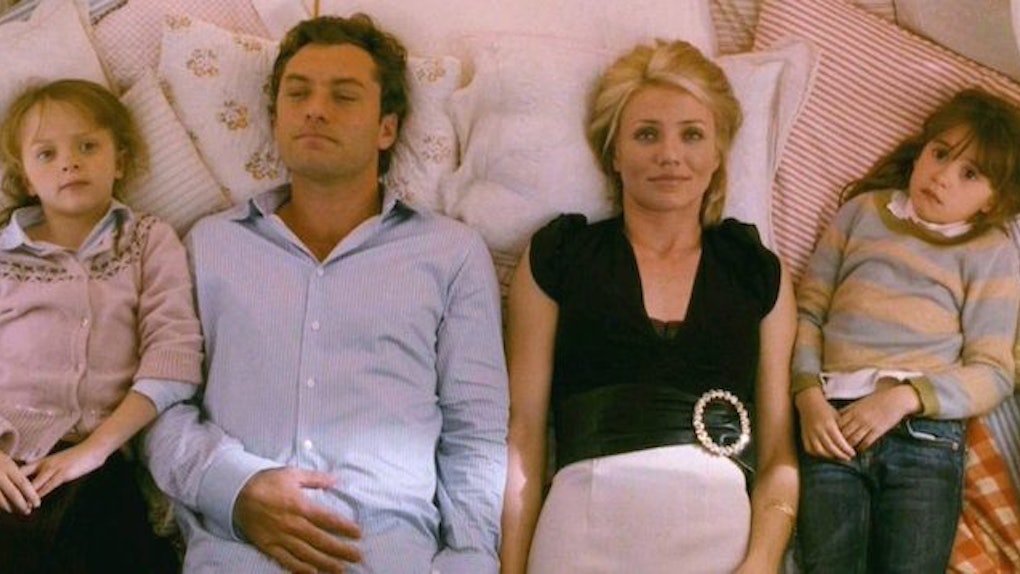 For the longest time, I never considered dating a single dad, but then lo and behold, I came across the most gorgeous looking man I had ever laid my eyes on -- and he wasn't the only one in the picture.

There in his arms was the most precious little girl, and I swear I felt like I fell in love with both their smiles right then and there. I knew I would never forgive myself if I didn't give him an honest shot. And two months later, I couldn't be happier with my decision.

Truth be told, everyone has a past and brings baggage into a relationship. And sometimes that baggage wants to play monsters in the basement and throw Buzz Lightyear in jail because he deserves it.

Although, of course, I don't think my boyfriend's daughter qualifies as “baggage,” but rather, a deeply charming, fun, hilarious little human who is half him.

And because of them, I had no idea my heart was capable of loving two people equally.

In such a short time, I've noticed some pretty out-there things that seemingly came out of left field.

Here are 10 things I know so far to be true.

1. My boyfriend is comfortable in any social situation.

If he has to have conversations on why Mr. Bear is taking a nap in the oven, or convince his daughter to eat her peanut butter and jelly sandwich by singing the “It's Peanut Butter Jelly Time!!!” song, then he can easily handle a conversation with my parents or friends.

2. There are a lot of people in this world who like to make “dad jokes."

Everyone always questions whether or not my boyfriend has a “dad bod,” and it makes me chuckle. My boyfriend is ripped, and when I say ripped, I mean like Tarzan ripped.

Alexander Skarsgård has nothing on my boyfriend. And he can rock a man bun, dear lord… let's just say I will never get over how gorgeous he is. Believe me, I would post a picture of him but I think all the homewreckers out there would become stage-fve clingers and show up on our next date…

When someone has to care for another human, they simply have less emotional and physical energy to invent hang-ups.

Nothing is a big deal until it's an actual big deal, and you'll learn the difference real quick from dating a single dad.

4. He is incredibly patient, almost to a fault.

Someone who had to teach a tiny, indignant child how to master the potty isn't going to flip when you chug your morning coffee and have to pee every 10 minutes.

5. He knows the world doesn't revolve around him.

This can be difficult to find in this world of overgrown Peter Pans on the hunt for their own mother figure – you know, someone to remind them to go to the doctors, praise them constantly, make sure they have everything they need or want.

Playing mother to a series of adult Peter Pans got old real quick, so this kind of attitude was a very welcome change of pace.

Since there's a kid involved, he isn't trying to throw caution to the wind and hopes to God things work out.

If you're in his life, that's because he's letting you be in it. He's careful with his decisions in life – both those that do and don't concern you. And if you ask me, that's pretty hot.

7. I can dodge responsibility for my music choices.

Although we aren't quite there yet with this issue, I know it's coming and I can't wait.

The day a Bruno Mars song happens 10 times in a row, I can blame it on his daughter. And you bet your ass his daughter and I are going to sing a duet together every car ride -- our top favorite will most likely be “Do You Want To Build A Snowman?”

This is possibly one of the greatest things about dating a single dad.

If you're throwing up from eating bad food the night before, he'll hold your hair back. If you throw up on your clothes or on him, he probably won't love it, but he'll be understanding because life happens. He also doesn't panic about periods or other bodily functions.

9. You learn how to give up control.

I tend to be a control freak. I like being in control and being able to call the shots. A lot of life is outside our control and dating someone with a child is a very effective reminder that no matter what, we can't always call the shots.

You learn to become adaptable. I waited until my boyfriend thought it was an appropriate time to introduce me to his daughter. And even then, I never once showed up and said, “Hey little girl, I'm going to be your second mother!” Not at all.

I'm just someone who kicks it from time to time to join in on watching them play monsters, build gingerbread houses or play hide-n-seek from her dad.

When and if my boyfriend wants to explain my role in his life to his daughter, that's not really up to me. It's a discussion he and I can have, but it's not my place to try and pilot it.

10. Shit does not have to be so damn serious all the time.

Things just don't have to be so serious in the sense that they aren't very fun anymore. It's almost remarkable how quickly you can reverse back to such an easily entertained train of thought.

It's freeing to be hiding in the corner of a dark room playing a ridiculously tense game of hide-n-seek or sitting across the table from one another making funny faces.

The last thing any single parent wants to do is introduce a “special someone” to their kids just to have that person disappear from their lives somewhere down the road. If you're dating a single dad, you're more than likely dating someone who isn't just looking to just hook up. He's likely in it for the long haul.

If you end up having the privilege of dating a single dad, remember that somehow, in the middle of so much chaos and uncertainty, you've both managed to find each other in this world, and when you think about it, that's about as good as dating ever gets.