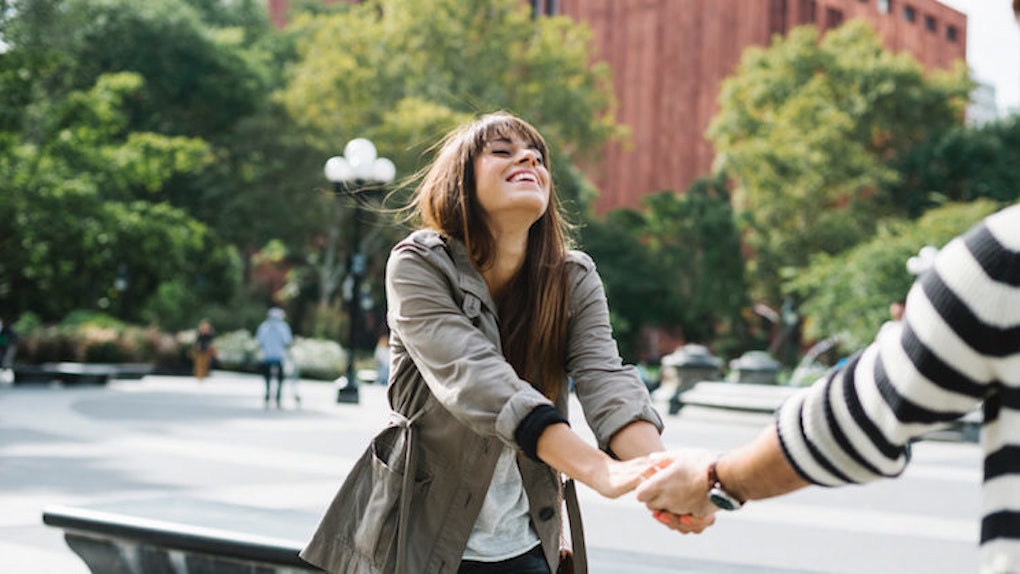 First dates can be incredibly uncomfortable. They can be awkward. Drawn out. Even miserable.

Just the same, however, they can be incredible. Beautiful. Memorable. Magical. It all depends on the connection two people can make once they sit down to break bread.

But while you may know whether or not things are going well on your end, how do you know when the other person feels the same? Luckily, people give off a lot of hints. Some voluntary, others not so much.

You’re probably having a difficult time figuring out if the first date is going well or not. Well, no reason to worry. I got your backs, ladies.

1. They make eye contact, making sure you know they’re doing so deliberately.

He wants something from you, and assuming he isn’t a serial killer, he wants you in his life.

And if you can both look into each other’s eyes without blinking for several seconds, chances are you feel pretty comfortable with him too. There will almost certainly be a second date.

2. They’ll nonchalantly brush against you in some manner -- not in a perverted way, but in a way that lets you know they’re present, both mentally and physically.

There’s a right way to touch a woman on the first date, and then there are wrong ways -- many of them.

Not all first dates have a right way; it really depends on the woman. If the woman is not open to a man even brushing up against her, then he shouldn’t do it. Simple.

If, on the other hand, a guy believes a slight touch or brush would be very much appreciated, then by all means… he should do so.

If a guy likes a woman and wants to see her again, he is going to try to make physical contact of some sort. The only thing standing in his way is you; if you’re cold and don’t seem receptive to him grazing against you, touching your arm or wrist or patting down your shoulders after he helps you put on your coat, then he will almost certainly get the hint and stay away.

Some guys have more brass than others, so if you’re interested, then do both of you a favor and make it obvious.

3. They spend less time talking about themselves and more time observing and absorbing you.

Guys, and I’m sure women alike, will do their best to fill the silences when they aren’t especially interested in the woman they’re with. It’s only normal, as we find silence with someone we’re not comfortable with...well, uncomfortable.

If, on the other hand, the guy you’re with is doing more listening than talking, more observing and absorbing than spewing words to fill the gaps, then he cares.

He, at the very least, cares enough about you to want to get to know you better. If you can pique a man’s interest, then you’ve basically got him in your pocket.

4. They’ll push for a dessert or a walk after dinner.

Not all first dates are good ones -- not even when there is potential. Sometimes it takes a couple of dates to get things really rolling.

However, if you’re with a guy who seems to be trying to rush through the courses just to wrap things up, it’s pretty obvious he isn’t interested enough to get to know you. So enjoy your meal, and be on your way. There’s likely a better match around the corner.

5. They’ll walk you all the way home.

If they can, they’ll walk you all the way up to your door. If you live way out of the way, he’ll either walk you to your car, catch you a cab or put you on a train. He’ll then, almost certainly, text you later to make sure you made it home okay.

If, on the other hand, he parts ways as soon as you get your jacket on, he isn’t going to be interested in a second date. He wasn't even interested in the first one. It isn’t what you were hoping for, but it’s okay. Not everyone can be the one. You just need to keep on looking.

6. They’ll pause before saying "goodnight," refraining from kissing you, afraid that you may not appreciate them making a move so quickly.

Not all men are gentlemen, but most of them turn into gentlemen when they believe acting that way is going to get them what they want -- in this case, a second date with you. Which is great, assuming you’re interested in seeing them again.

A guy who's a complete jerk can turn into Prince Charming when he meets the right woman. That’s not to say him making a move on you and trying to kiss you goodnight makes him a jerk. Although, if you haven’t given him any signals the entire night that you may be receptive to locking lips, then he’s likely just trying to get whatever action he can.

So even if you do kiss him or take him upstairs, that’s likely the last you’ll hear from him.