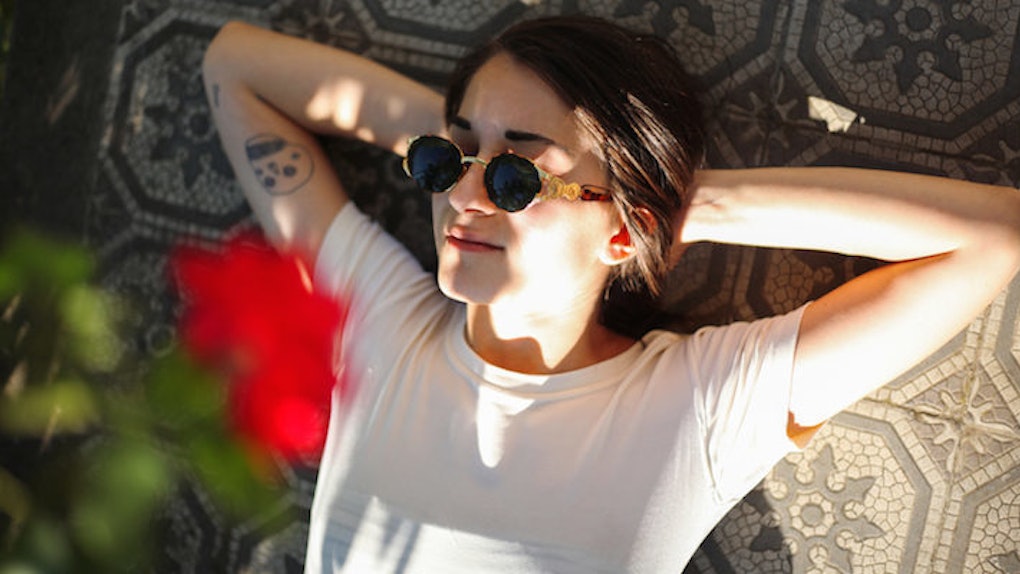 3 Things Guys Don't Understand About The Girl They Call 'Chill'

If you ask anyone who has met me what I’m like, I can almost guarantee you the first word that comes out of his or her mouth will be “chill.”

I always thought it was kind of a backhanded compliment.

“Chill” means laid-back and easy to get along with, which is great, but it's also associated with a lack of motivation or commitment.

In any case, as a “chill girl” who likes to hang out with other chill girls, I declare myself an expert on the type.

The chill girl owns a lot of Nike, especially sweatpants.

She probably has an inexplicably wide variety of music saved on her Spotify account, and she'll feel whatever you choose when you plug in the auxiliary cord.

She doesn’t dislike any type of food. So when you ask her what restaurant she wants to go to, she’ll say, “Anywhere is fine” and actually mean it.

She can talk about sensitive subjects of any nature with grace and respect. She doesn’t take anything too seriously, and that makes you comfortable.

She’ll laugh at your jokes (even if they’re not funny), and she'll make you crack up with her well-timed one-liners.

She’s also usually "one of the guys."

She’s probably happier at a baseball game with a hot dog in hand than she is with a champagne flute on a fancy night out. She can kick your ass in a game of beer pong, and then she'll drink 10 more with you during Sunday Night Football.

When you check the results of your fantasy matchup on Monday night, you’ll probably find her team destroyed yours.

She’s that no-drama, no-bullsh*t, genuine friend we always want around. But in some ways, we’ve got her all wrong.

We've made some false assumptions about her.

These are the things we’ve misjudged about the chill girl:

1. She doesn’t mind when people mess up.

We think the chill girl won’t mind if we forget to give her gas money for that 300-mile road trip.

If we’re dating the chill girl, we think it’s no big deal to her if we flirt with someone else while we’re drunk.

If we slip up and forget to wish her a happy birthday, a quick “sorry” text will be enough to make up for it.

While you can count on the chill girl to not overreact to minor infractions, if people she trusts continually take advantage of her laid-back, non-confrontational nature, she’s going to notice.

Ordinarily, she lets the little things slide, but beware if you're a repeat offender.

As the transgressions build up, she'll become more frustrated and devastated.

Don’t be surprised if one day she snaps, and you feel terrible about all the ways you’ve disappointed her.

2. She’s down to hook up with no strings attached.

This is an assumption many men (or women) who know the chill girl will make.

Her relaxed attitude is often misconstrued as being “down for whatever.”

Being one of the bros doesn’t always mean she thinks with her dick, and this puts the chill girl in a dangerous situation.

Her low-key nature is more likely to attract the men who don’t want anything serious, leaving her more vulnerable than the average girl.

I've had to learn this the hard way.

For instance, one friend didn’t see what was wrong with changing what was supposed to be a friendly hangout into a “Netflix and chill” session.

Even worse, another friend was clueless to the fact I wasn't okay with having casual sex at a party.

On top of that, another guy told me he just assumed he didn’t need to give me respect, since I was so — wait for it — "chill" about everything.

Even if the chill girl doesn’t act crazy around someone she likes or expresses her true feelings, don’t assume she doesn’t have them.

Chill girls are simply more private, and you never know which one is a hopeless romantic.

She’s cool with whatever only because that’s what you want, and she cares about you.

One of the best-kept secrets about the chill girl is she prioritizes other people’s happiness over her own.

That’s why she’s so easy to get along with.

The chill girl is selfless, but that sometimes comes from deep-seated insecurities or personality flaws.

She wants to please everyone because she seeks approval.

She doesn’t comment on what’s bothering her not because it doesn’t get to her, but because she can’t stand the idea of creating drama or tension.

You’ll find her taking responsibility for things she shouldn’t, simply because she wants normalcy restored.

The chill girl is just a girl who struggles with imbalance. All she really wants is to be chill, and that’s what she works toward.

So, that’s what she projects, but it's certainly not always how she feels.

Keep that in mind the next time you interact with a chill girl.

No one is exactly how she seems.