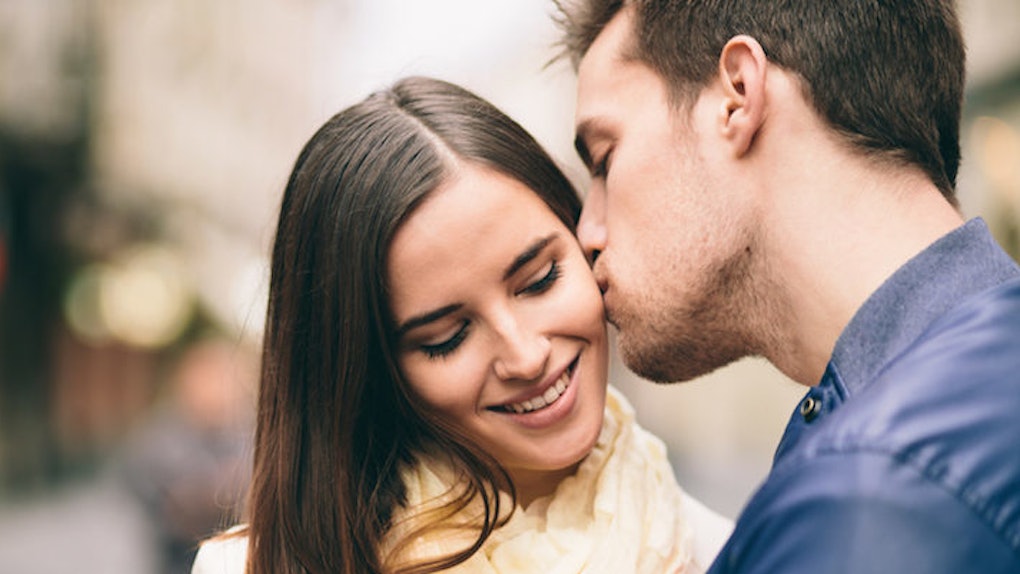 Men aren't always the best at expressing their emotions or letting you know how they feel about you.

We're a very guarded gender. I don't believe it to be a thing of nature, but rather something we pick up along the way.

Of course, not all men are created equal -- some are better with their words than others -- but most fail to tell those they care about how much they actually care about them. And it can make those we date feel much less important to us than they actually are.

Well, just because your man doesn't tell you how much he cares about you doesn't mean he doesn't care about you (if you're currently dating a man, I hope you find this information comforting).

To be completely honest, most individuals who need to use words to express the way they feel aren't usually very sincere. Men are much better at letting you know they care about you through subtle actions like these.

1. He goes out of his way to make sure you're comfortable and happy.

It may be something as simple as giving you his jacket on a cold autumn's night or choosing to watch the movie you want to watch.

Whatever it is, he enjoys making you happy.

He doesn't necessarily go over the top, but it's the little things he does for you during those times when you need a little extra something to show he truly does care for you.

2. When he listens, he actually listens.

3. He doesn't always tell you what you want to hear, but he's always honest with you.

He won't be rude to you or insult you, but he will tell you some things you may not particularly want to hear. And he does so because he believes telling you the truth will help you make the best decisions.

He cares too much for you to lie to you. Sure, he could lie, but he doesn't believe relationships built on lies can possibly last -- and he sees the two of you going somewhere.

4. He's somehow never too busy to spend time with you.

He's working two jobs, going to school, taking care of his parents and siblings -- and somehow whenever you need him, he's there for you.

He takes his space when he needs it, but he makes sure to give you both the space and attention you need. He cares for you and needs to spend time with you.

5. He gets protective when he thinks someone hurt you.

Whether it's one of your girlfriends who always manages to make you cry, one of your coworkers who continues to be a jerk or that douchebag at the bar who gets a bit too comfortable or a bit too handsy when your man isn't around, he is ready to fight for you.

You don't need to ask him. In fact, you don't even get a chance to do so. The moment he hears you're hurt or in some sort of danger, he's there for you.

He's at your performances, your award ceremonies, your graduations, speeches, conferences and more. He supports you because he believes in you.

If there is one single thing that is non-negotiable in any relationship, it's this: The person you're with needs to believe in you.

If he doesn't, then you're with the wrong person.

7. He's a generous lover in the bedroom.

He does that thing you like so much -- not because he thinks it will get you to do something, but because he knows you like it so much.

He likes pleasuring you because it turns him on even more.

There's more to a relationship than sex, but if you want to know if a man cares for you, taking a peek between the sheets is an easy way to find out.

8. When he's wrong or screws up, he sincerely apologizes.

Some guys don't do apologies.

Why? Because they don't care. They'd rather pretend to be right than admit they may have been wrong.

Other guys only apologize because they believe that's what you want to hear. They care a little bit, but mostly about pacifying you.

It's those men who apologize with sincerity in their voices who care enough about you to admit they're the ones who were wrong, they made mistakes and are willing to own up to it.

There's something in our eyes that lets us know the person we're looking at is seeing us -- not just looking at our outer image, but looking into our souls.

If your man looks into your eyes, and you feel him opening up to let you look into and through him, then he cares for you very deeply.

It takes time to get to this level of intimacy, but it truly is one of the most beautiful experiences we're allotted in life.