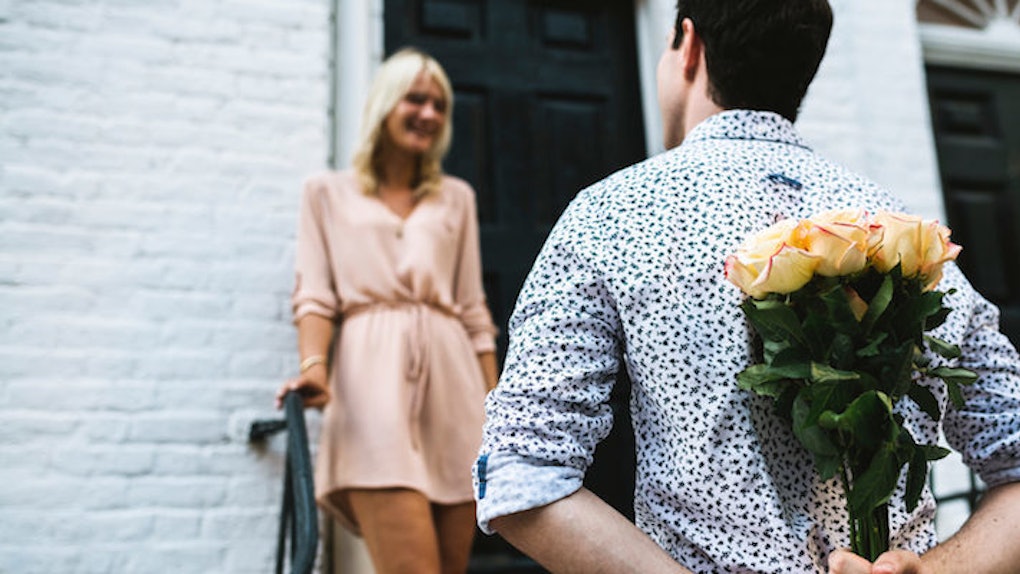 Most of us began our adventures with dating in our teens. But I'm really starting to believe we haven't reevaluated our approach since.

This revelation hit me after a recent date spiraled downward, after following the dreaded bartender inquiry of, "Whose tab does this drink go on?"

I'm pretty sure we sat there for a good 10 hours before I finally said, "Oh. Yes, just a second," as I scrambled for my wallet.

Finally, my date chimed in with, "Hey, I've got this one." Great, thank you. Welcome to the conversation.

Where were you yesterday when he asked? I'm not still bitter or embarrassed or anything.

Anyway, it sparked the thought that dating could be so much easier — or maybe more bearable is the correct term here — if we all welcomed our dating skills into adulthood.

Here are seven simple ways to do that:

Ask the question, "Will you go out with me?"  I've long since given up on caring how I'm asked out. I realize flowers on my doorstep are out of the question, as well as phone calls, usually.

I'll gladly accept a text, an email or even an Instagram comment, as long as I'm being asked a clear, definitive question.

Let's be real: The guy doesn't have to be solely responsible for doing the asking, either. I am not above initiating a date: I've done it plenty of times.

I've even maybe once asked an acquaintance to set me up with her brother and immediately regretted it. But I did it, and I'll own it.

This is 2016. There are no rules. Well, none besides the mandatory seven I'm giving you right now.

Once both parties agree they'd like to spend time together in a public place, they should communicate when and where.

None of this "Yeah, let's get a drink sometime."

Cool, cool, cool, cool. "Cool" is right up there with "K" on my most obnoxious text list. No. Somebody just needs to take the reins.

How easy was that?

This should be self-explanatory and an obvious "duh." Remember that these are plans you've made with another person: a human being with feelings.

If something changes and you need to reschedule, or if you had a bad day and you'll be late, or you met someone better so you're canceling  — ugh, you're the worst, BTW — have the decency to communicate that clearly. Nobody likes being stood up.

Again, this is a human with real emotions sitting across from you. Ask questions, be interested, engage in conversation and be present.

Dating is simply two people getting together to learn more about each other. It's just been disguised over the years as something way more intimidating.

But it doesn't have to be scary.

On the other side of this, don't forget you're human, too. Sometimes, it seems like as soon as the title of "date" is slapped across a dinner, we forget all the manners and decent social skills we've learned over our lifetimes.

Talking to a waiter on a date is the same as talking to a waiter when you're out with friends. One time, a guy tried to impress me — at least, I think that was his purpose — with his ability to catch the waiter's attention with only eye contact.

After a few minutes of "eye contact"  — although from my observation, it was more like creepy, intense staring — there was still no waiter or water refill in sight.

But I waved my hand and poof: The waiter appeared.

This one can be tricky because there are so many different opinions and expectations surrounding who should pay. Some people prefer to pay separately. Some think the guy should always pay. Some say that the person who initiated the date should pick up the bill.

If you're a guy and you believe the man should always pay, then be proactive. Ask the waiter or waitress for the check, or when he or she brings it, immediately grab it and get your wallet out.

If you're a girl who asked out a guy and believe the person who asked should do the paying, then ask for the check or grab it when it's put on the table. If you're in the "let's go Dutch" camp, be upfront when you ask someone out. Let him or her know you'd like to pay separately, so that the person is not caught off-guard upon his or her last bite of tiramisu.

Alternately, I think we should all just go into dates assuming we will be paying for ourselves, and we should be prepared to do so. Therefore, make sure you have the appropriate funds.

If the other person offers to pay the whole bill, awesome. What a great surprise. I think an important part of being an adult is realizing you should only go on dates if you're able to shell out the cash for an appetizer, two entrees and some drinks.

This goes for males and females alike. If you're seriously dating, that means you're considering the possibility of a relationship with someone. If you're on that path, you should have your finances figured out.

I'm not saying you should be a millionaire. I just think adults looking toward the future should have enough money in the bank to not go bankrupt over one date.

Alright, you've successfully made it to the end of your date as an adult. Now what?

The key to ending a date well is to not offer empty promises. If you don't intend to go out with this person again, don't say, "Let's do this again sometime."

There are plenty of other kind things you could say, like, "Thank you for dinner. I enjoyed meeting you. Have a great night." If you're interested in another date, try "I really enjoyed tonight. Would you be interested in going out again sometime?"

I think the true adult test is when you're on the opposite side of that. If you want to go out with someone again but he or she is not interested, respect that. You don't want to date someone who isn't interested in you.

If he or she is interested and you're not, be kind with regard to your rejection. We are all adults here. We should be able to date and not date amicably.

There is no need to harbor anger toward someone who doesn't want to go out with you. All that does is waste your time and feelings on something you have no control over.

It doesn't move your life forward. Just be kind and honest.

Dating is rough. Being an adult is rough. But we are all in this together. (Cue the "High School Musical" soundtrack.)

Some of the dates I'm most proud of  — is that a thing, to be proud of a date? — are the ones that didn't go anywhere. But they were still really great dates.

It takes a lot of courage to allow someone into your life, even if it's just for an evening. Open yourself up to the possibility of rejection.

It would be a whole lot easier if we realized we're all in the same boat. So, while you're out there on the front lines of the dating war, always remember to be kind, reach for the bill and take it all in like an adult.