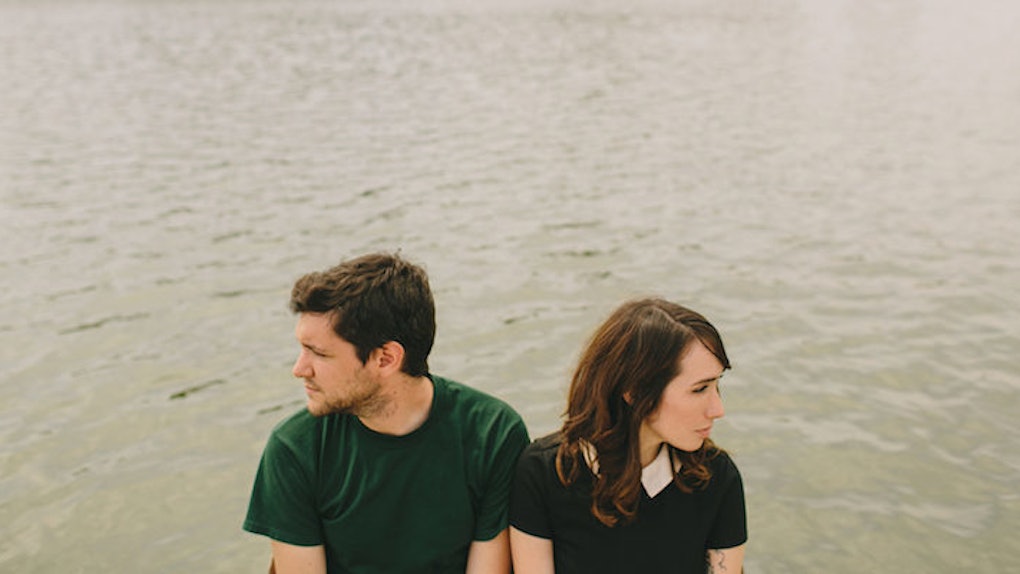 Dating purgatory isn't where you want to be if you're in search of something real.

We also voluntarily remain in dating purgatory, no matter how awful it is, by condoning non-relationships, even though we actually want the real deal.

Our generation has accepted dating purgatory as the norm; it's what we settle for instead of pursuing something real.

So, when exactly are we in dating purgatory? It's whenever we have one foot out the door instead of taking a risk and jumping into a relationship with both feet. It's whenever we keep dating someone who wants nothing serious, even though we do.

It's whenever we keep using Tinder because we're not fully satisfied with the person we're dating. It's when we're not all in.

It's all those times we dated people never knowing where we stood or whether or not he or she was seeing anyone else.

It's all those times we were in a relationship that had no label, or it's anytime we found ourselves in an almost-relationship.

Dating purgatory is something Generation-Y has mastered, and that's not a good thing. It's no wonder we're the hopeless non-romantic generation.

We all want a supportive partner who can motivate us to aim higher, who cares deeply for us and who we can take to family events.

We all want it, and yet, we aren't willing to do what it takes to have it.

Here are the many reasons why consistently remaining in dating purgatory is ruining our shot at the real deal:

I'd like to compare the serial daters of our generation to a big group of once-sticky stickers.

When we're new, we can stick onto anything, form a strong connection and happily stay put.

However, every time we get stuck in dating purgatory by dating someone who just isn't all in, we lose our stickiness.

Every time we participate in the hook-up culture and have casual sex, we lose more of our stickiness.

We (the stickers) get less sticky every time we engage in meaningless relationships that are going nowhere.

We get less sticky due to constantly being attached then unattached, again and again.

The problem with losing your stickiness is that each time you attempt to stick onto someone new, it gets easier and easier to pull away.

Just like a sticker that's gotten old, we don't form as strong connections as we once did. It becomes easier to not get attached and to unlatch ourselves emotionally.

It becomes practice to not have a real connection.

It becomes the trend to keep our mouths shut, rather than asking the other person where we stand.

Then, one day, when you find someone you just might want to stick with, you'll wish you had met him or her back when you were less jaded and a lot stickier.

We're in denial about what the real deal looks like.

What does the real deal look like? The real deal involves self-sacrifice. It's giving up other options. It's not talking to girls or guys on Tinder anymore.

It's when you jump in with both feet and give what you've got a real shot. It's when your only FOMO is the fear of losing what you have with that person.

The real deal is when you go to that event with your significant other, even though you don't really want to go.

It's when you'll do anything to make your man or woman happy. It's when you tell each other you only want each other and you don't want the other to see anyone else.

If it's the real deal, you're not still looking because you know what you've found is unbeatable.

You'd never want to risk losing it by continuing to shop around and getting caught.

We need to start focusing on the benefits of being in a relationship, rather than mulling over the drawbacks or worrying about the sacrifices.

It requires bravery to decide you want to be committed to someone. Even if you really like this person, you're still worried it won't work out.

But for any chance at the real deal, you'll have to cut ties with everyone you've left dangling.

We've gotten used to not being anyone's priority.

We're used to being an option rather than a priority. Some of us have never experienced what it feels like to be someone's priority or someone's everything.

We're letting these undeserving people take up all of our emotional real estate with their guessing games and their bullshit.

Our generation needs to be more resistant to mediocrity. Dating purgatory is mediocre, especially if what you desire is something real and someone who is all in.

Perhaps you stay in a non-relationship and never question what it is out of fear that the moment you ask any questions about what you are or where you stand, you'll scare that fragile pseudo-relationship away.

You're aware that the relationship you're in is not stable, and you're afraid if you so much as blow on it, it'll be gone.

That's why you tiptoe around the issue of "What are we?" and dance around the question of "What do you want this to be?"

We shouldn't settle for anyone unless they step it up. If someone's not all in and wants to keep one foot out the door, they obviously don't adore you. If they did, it would look a lot different than dating purgatory.

You can have no more pseudo-relationships if what you want is a real one.