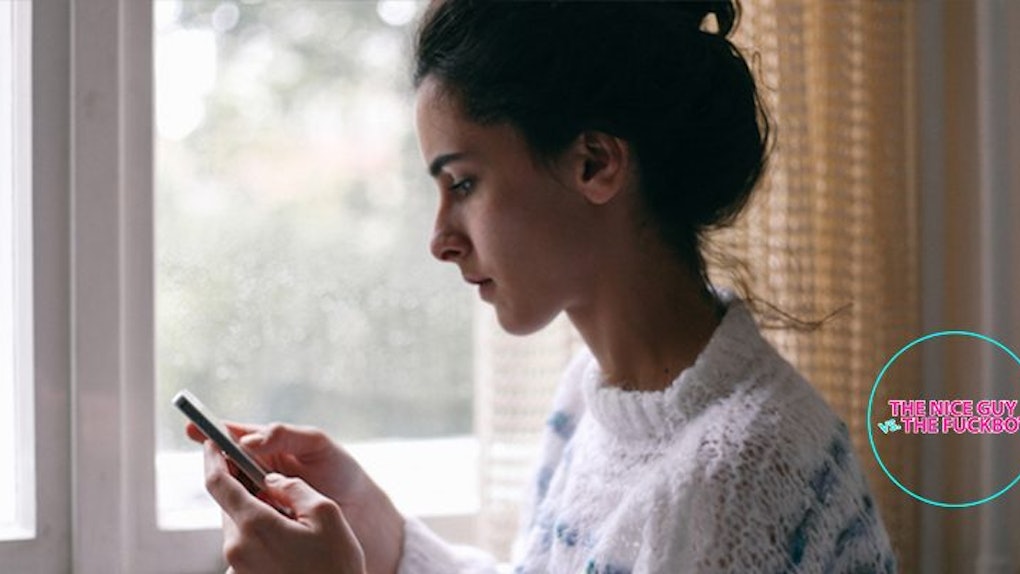 What Happens After You Snoop Through Your Guy's Phone

So I need your help. I was talking to this guy, who was a complete fuckboy, but like every other girl, I thought I could change him.

For two months straight, we hung out practically every day, went on dates and spent many nights at his apartment. If we weren't going bowling, out to eat or going to bars, we were sitting on his couch watching Netflix.

He began opening up to me, telling me about his life and how his mom cheated on his dad. He would constantly make it known to other people that we were together, especially to all his friends. He made me meet his dad, his best friend from home and even said he wanted to take me back to his hometown.

The other night, after a night out, I went through his phone. I know this is bad, disrespectful and psychotic, but I was drunk and had a bad gut feeling.

He had no bad texts, and his texts to his dad consisted of him talking about me and our date. He didn't have Tinder, didn't have any girls' nudes except mine and his phone seemed clean.

I also went through his Instagram DMs, and he was DMing two girls.

He sent one of the girls some cheesy pickup line and asked her when their first date is. He asked the second if she sends nudes, and she told him no. I started crying hysterically and woke him up, When I confronted him about it, he had nothing to say.

The next night, he texted me, "Hi," and I asked him how he can talk to me normally like that when he was DMing other girls like that.

He replied with things like "I'm sorry" and "I'll leave you alone." He always used to play my birthday on QuickDraw — it was kind of our thing.

I saw this and instantly thought he knew he messed up, and he would be texting me in no time... until a few hours later. Then, I was with my friends drinking, and one of my guy friends asked me if he was in this girl's Snapchat story.

Turns out, it was the girl he used to have drunk sex with — she was at his apartment with him.

This is where I need your help and need you guys to give me the honest truth. How could he say all those things and do all those things to me, but still take that girl home two nights after we stopped talking?

This is the guy who always told me he was scared to lose me and who told me constantly I deserved better because I have more going for me than he does.

It's pathetic, but I've been a mess. I've been crying to the point of shaking, which isn't like me at all. (BTW, this guy and I work together.)

What did I do to deserve this?

Thanks for helping me guys!!

I want to start with a rather blunt question here: Would you say you're insecure? There are many signs in your message pointing to yes.

And when you indulge in a few drinks, these signs irradiate as if they're on the Vegas boardwalk.

I don't mean to offend you here, I'm merely stating an observation that's central to what I'm about to spew at you (in the most helpful way possible).

Let me start with the most obvious point: You two have only been seeing each other for two months, and not once in your email do you mention you two were exclusive. Shit, you're both still strangers at this point.

By taking his phone and rooting through his dirty laundry to pull out just a few dirty socks (which I will address later), you broke the rules, Victoria. You invaded his privacy.

You're fortunate he even wanted to speak with you afterward, as most dudes I know would have written you off instantly.

You're fortunate he even wanted to speak with you after. Most dudes I know would have written you off.

Now, if you two were exclusive and had been together for a respectable amount of time, I would react differently. But when this happened, things were still very new. So for you to deceive him already is reflective of your own self-confidence.

By snooping through his phone, you instantly became just as guilty as he is. Therefore, you cannot take the higher road here, which is exactly what you did when he reached out, and you chose to ignore him.

I've been with my fiancée for three years, and neither of us have never looked into each other's phones, despite knowing the other's password. Sure, it's tempting, but we've remained firm in resisting these temptations because we trust each other. Plus, going through somebody's phone without permission is unbelievably disrespectful.

I'm not saying our relationship is without conflict. She and I were very insecure when we first met, and though there were points in our relationship where jealousy did intervene, our mutual trust was one prevailing factor that kept us together.

You mention during your technological ransack that you happened upon several conversations he had with his dad where you were the topic.

Victoria, that's a huge deal. Most dudes don't disclose details of their relationships with a parent unless they believe they're on the cusp of something meaningful, they're too excited to keep it to themselves or their buddies would think they're a pussy if they ever told them how they felt.

And then, instead of being angry at you for invading his most personal device, he tries to reconcile with a romantic, nostalgic gesture.

But you, believing yourself innocent in the matter, chose to dismiss him, so he felt even worse about himself and the decisions he made.

But instead of wallowing in self-pity, he likely decided to seek solace in a past relationship, which you witnessed on Snapchat. (That was probably totally what he intended, by the way. Boys can be petty, too.)

Should he be messaging other women on Instagram? No. Were you deceived? Yes. But if you think he's a fuckboy for doing what he did, there's a good chance he thinks you're crazy for doing what you did.

He screwed up, Victoria — that much is certain. But because you two hadn't established what you were, combined with the short duration of the relationship, his actions are a bit more forgivable.

So my advice to you is this: If you still really like this guy, give him another shot. He fucked up, and he better not do it again. Make sure he knows this. (I'm sure you will.)

But the way he apologized, the way he's opened up about his parents' sordid relationship and the way he spoke about you to his father lead me to believe he does truly have strong feelings for you — he just made a few mistakes while realizing this.

There have been many fuckboys mentioned in the emails we've received, Victoria, and I'm reluctant to say your man isn't one, despite how his behavior appears. He cares about you too much for me to categorize him in such a way.

So reach out, and see where that takes you. He (and his dad) will be thrilled.

I don't mean to laugh, and I know you're reeling, but your question reeks of hypocrisy and spun victim narrative.

How could he do those things to you? YOU betrayed HIS trust.

You went and broke down the one door you knew you weren't allowed to unlock, and all you found were failed insurance policies, getaway plans for IF something like this happened, plans he probably didn't want to use but knew he needed.

Then, you proved him right.

You seem to think it's unfathomable for him to run back to a former flame as soon as things deteriorated with you.

Why? This seems pretty predictable to me. Pretty understandable, too. Where else would he go? She probably doesn't go through his phone. She probably lets him breathe.

This reminds me of a night last summer. I was lying in bed with this Caribbean woman. We'd been seeing each other for a few weeks, and I could sense it was about to stall. She had way more going for her than I did, but she was also as insecure as she was captivating, which is to say very insecure.

Why is it always that the people who can have the world are the ones who are most afraid of it?

Anyway, we were talking about how we'd met. We had matched on a dating app, and we were disagreeing over the specifics of my opening line. We agreed it was stupid, but I didn't think it was quite as stupid as she recalled.

I opened the app and found our conversation. It was at the very top of the list because she was the last person I'd spoken to.

There weren't any other matches or conversations above her because they get catalogued chronologically, and I really hadn't talked to anyone else since we'd met.

“What?” I said. “I just want to see how we started talking. Look, it's our conversation.”

“But there are others.”

“You still have the app," she said. "There are others. I see them.”

“No,” she said, turning her shoulder.

I ended it with her shortly after. And I didn't even have anything to hide. And it sounds like your guy didn't have much to hide either, but things are doomed once you open that can of worms.

What I'm saying is, DON'T LOOK AT THE PHONE. DON'T EVEN PEEK.

Don't even tempt yourself. Treat it like that extra brownie you hid somewhere in the house because you know you couldn't control yourself if you saw it.

This isn't new advice. You know all of this. Everyone does.

It's the one rule we all abide by in this lawless, morally bankrupt, modern dating world. It's our safe space, our center, the one place we all have creative control. You know it's sacred.

How could you go through the phone? It's the one rule we all abide by in this lawless, modern dating world.

What if the tables were turned? What if he went through your phone?

No matter what he found, even if you killed someone and had pictures of the bloody knife, he'd be in the wrong because he violated your trust.

Now, I know you're convinced he actually did violate your trust in this situation, but he didn't.

What he did was akin to having a conversation with a girl in a bar when you weren't around. If you can't trust your significant other to do as little as that, then you're going to keep finding yourself without significant others.

What did you do to deserve this?

What did he do?