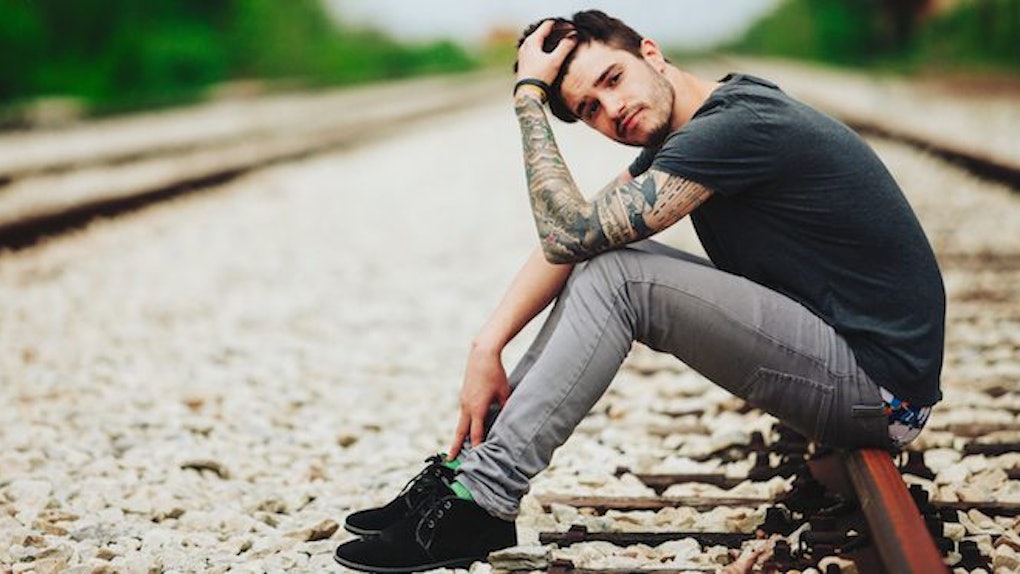 How To Tell If He's Only Into You Because He's Lonely

After continuous texting with the same guy for weeks, you've come to conclude that his repetitive AWOL nature may be due to one thing: He's only into you because he's lonely.

As dating has turned into a world of left and right swipes done when we're bored, people are taking those matches for granted. It's easy to fall into a relationship with someone who may not be in it (or into you) for the right reasons.

Sometimes, you're just a placeholder. Or, in this case, maybe your dude just has no one else to turn to.

If you suspect that you might just be a time-filler for the guy you're currently seeing, your intuition may be trying to tell you something.

These "lonely" signs below will help you figure out his deal once and for all. Unfortunately, it may be time to find a better match.

1. He never seems to have any other plans.

A tell-tale sign of a lonely guy is if he's always free. If you realize through conversations that he has zero other activities going on in his life, chances are he may be friendless and a little alone.

April Masini, a New York-based relationship expert, says if he has no plans for the week or weekend, you're probably just a distraction from it all.

"You may be great, and he may be, too — but he may be with you because he doesn't have anything else going on," says Masini. "You've become Default Girl."

If you can tell that you're his only source of activity, consider that a bad sign.

2. He says he's looking for anything serious.

Stef Safran, a Chicago-based matchmaker, says that if a guy claims he's not looking for a long-term relationship right now, you should believe him. There's a chance he may just be keeping you around to quell his loneliness.

"If he tells you this once, listen to it," says Safran. "Even if you start spending lots of time together, he said it for a reason."

Don't allow repetitive hangouts to convince you he's looking for something down the road. You may just be spending all that time together because he has absolutely nothing else to do.

Don't settle for just keeping someone company if you want more than that.

3. He's quick to drop you if better plans come up.

If you've noticed that he has a tendency to ditch you if literally anything else comes up, that may be a red flag.

"If he drops you the minute he's got something going with someone else — anyone else (his sister, his college roommate's cousin, his dry cleaner's mother) — chances are, you're a filler in his day so that he doesn't have to face the metaphorical four walls of his lonely life," says Masini.

If he doesn't prioritize you, and instead just keeps you around until he's got something else going on, he's not in it for the right reasons.

It may be time to let him go.

4. He talks about himself way too much.

Though he may just be a narcissist (which is also bad), if your guy can't stop blabbering on about himself and the most mundane details of his day, it could be due to the fact that he's lonely AF.

If he's not telling you just the highlights, says Masini, it's because he's glad he found someone who will listen to his life story.

"When he starts telling you details of his day like how he walked the dog, bought new dental floss, made waffles, got the mail... you can begin to tell that his life isn't about interactions with other people," says Masini. "It's about a lonely world that's filled with tasks."

Think about finding someone who is also interested in learning details about your life, instead of just treating you like their personal therapist.

If he's fresh out of a relationship and already all about spending time with you, he may just be using you to fill a void.

According to Safran, it's best to ask yourself, "Does he talk too much about his ex? Does he seem to be upset because she met someone before he did?"

And if he's in the midst of dealing with divorce, that's even worse. Odds are he's still hung up on the idea of having that person by his side all the time.

"Even if the marriage 'ended' before [a divorce] was filed, most people that have committed vows to someone will realize that every relationship has its perks and downfalls which if they haven't had time to reflect, they might only be idealizing you," says Safran.

It may be time to cut this one loose.

It's important to remember that you'll find someone who thinks you're perfect, not just a space-filler when he doesn't have anything else to do.

Being lonely is his issue to deal with, not yours.