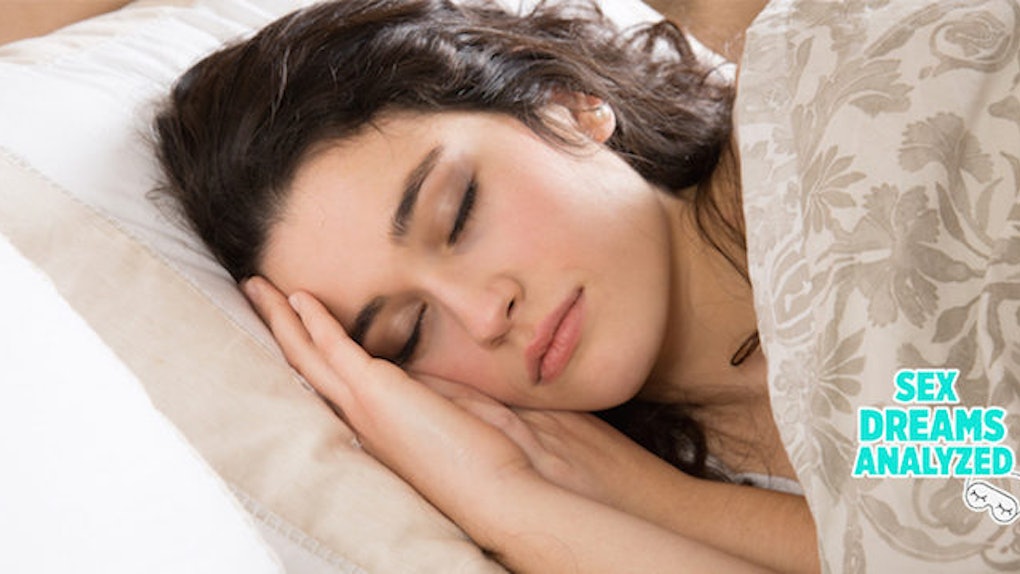 Sex Dream About Having Sex When You've Never Done It

This week's submission is from Analise*. She had a sex dream despite the fact that she's saving herself for marriage:

I dreamt that I was on a dimly lit bus with a few of my friends whom I know in real life. Weirdly enough, we knew that we were going to a hotel where sexual activities were about to happen. The guys were trying to win some games to sleep with me. But the person that I was sitting next to was not participating. I was secretly disappointed because, in real life, I do want to sleep with him, but I don't believe in sex before marriage.

I do want to sleep with him, but I don't believe in sex before marriage.

He ended up touching me inappropriately in the dark. Some of the guys noticed, to which I felt embarrassed, but did not stop his actions. I simply turned myself away from the view of the other guys and let my friend lie on my lap. After a brief moment, he started to touch me again. I wasn't comfortable, but I was driven by sexual desire. I let him touch me, but swiped his hands away when he got too inappropriate. He pulled me towards him and started up my skirt. I said, 'wait, later.'

He replied with a sigh, but I knew that he was ready for more once we got to the hotel. Upon arriving, however, we split to our own rooms, floors separated by sex. I went up with my sister and my mom, and I woke up from there. Some background information: I stay in a dorm with this guy where our floors were actually separated by sex. I have strong sexual attraction towards this guy, and I have wanted to try something on him at the club, but I'm too afraid of the consequences to do so.

The bus also tells us this dream is about a current path you are on that is a learning situation for you.

The bus also tells us this dream is about a current path you are on that is a learning situation for you.

Your destination is... well... pretty much a brothel! I think that's the biggest clue that this dream is all about your journey to sexy times! It is something you have not fully experienced yet because of your belief system. It is also something that is very likely on your mind a lot because you have desires and many of your peers — I bet — are active. The guys are playing games to win sex with you. Is this how you feel about most guys? They play head games in order to get into your pants? The guy you like is not participating in the games because you hope he is not like most guys.

The guy you like is not participating in the games because you hope he is not like most guys.

All the touching in the dream is not only an expression of your desire, but also a reflection of what will be a 'touchy' subject once you get in a relationship with someone.

In addition, I think this dream is trying to help you with this guy in particular. It's interesting he has his head in your lap, as that is a position of comfort and trust... two vital elements needed in order to have a healthy, lasting relationship AND two elements you may need before you can tell a guy about your premarital sex rule.

What you say to someone in a dream is usually something you are actually saying to yourself. You tell him, 'Wait, later.' This is really you telling yourself to wait until you are more comfortable to try something on him at the club. That is the suggestion you are giving yourself. The suggestion I am giving you is to try to get some good conversation going with him first so you can get an idea of his stance on relationships, abstinence, etc. But be sure you don't grill him or make him feel like he is applying for the job of your boyfriend, but rather bring it up nonchalantly in friendly conversation. An abstinence rule is a 'touchy' subject, and before you 'bring it to light' you have to have that comfort level. And who knows, it could get to the point where YOU don't have to be the one to try something.

Trust me, I understand more than anyone that having "touchy" conversations is HORRIFYING.

In fact, I can think of very few things I enjoy less than conversations like that.

But Lauri's right. As painful as those conversations are, they're necessary if you ever want to have something real with somebody.

The trickiest part of it all is probably figuring out whether or not the person is worthy of having this intimate conversation with you. As Lauri suggested, initially bringing it up nonchalantly and seeing how he reacts is probably the best way to go about it.

I hope this was helpful to Analise and anyone else who might have had a similar sex dream!