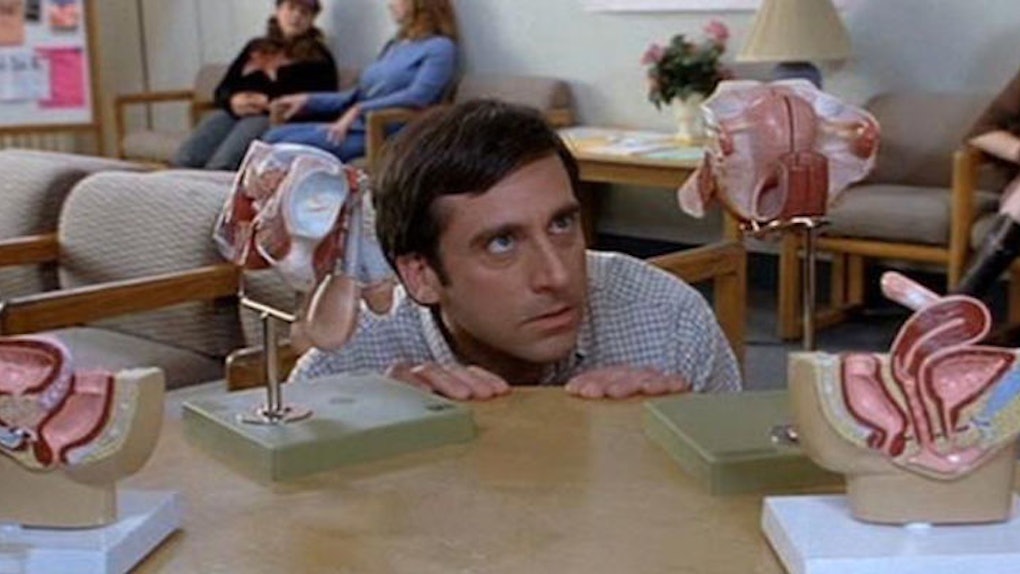 Dudes with big dicks like to show off. And dudes who don't have big dicks want big dicks. Therefore, if all dudes had big dicks, you'd be seeing a lot more of them.

Fortunately, there are far less people with big dicks than those without.

They're the guys in the public showers, twirling their schlongs like propellers. They exude a bold, lurching masculinity by dwarfing other dudes' modest members with dicks the size of pepper grinders at fancy restaurants.

The Journal of Sexual Medicine has shown that the average penis is roughly 5.6 inches, and less than 3 percent of the world's population measures over 8 inches — the universal size most men falsely recite when asked how big they are.

Research also tells us the ideal penis size is anywhere from 6.3 to 6.4 inches, which means the average man falls considerably below expectations, understandably damaging one's self-esteem.

Everything from pills to stretching mechanisms has been manufactured to address this growing, yet profitable industry, but nothing has proven effective.

So now, we've turned to the most drastic option: surgery.

Dr. Victor Loria, D.O., a renowned male enhancement surgeon, has performed these surgeries since 2010 and has worked with cosmetic fillers since 1995. From start to finish, the surgery takes about four hours and costs $4,900. (If a larger head is of interest to you, you can tack on another $1,000 to your bill.)

I spoke to three of Dr. Loria' patients, all of whom were all ecstatic about their results, about the procedure and the effects it had on their lives:

James' need for the surgery was the direct result of taking group showers after playing a sport. “I always wanted to have a towel covering me so that I wasn't embarrassed because of other individual's sizes,” he says. “When I was engaging in intercourse, I'd feel like I wasn't having any impact on women, and it's definitely humbling, in a most hurtful way.”

After Loria's surgery, James had gone from 6 inches (which is above the international average) to 7 inches, when erect. “I'm more confident now, and because of that, I'm willing to try things I never dreamed of trying before, and I feel especially great when getting head because their whole mouth is full!”

Post-surgery, James admits sex is fantastic: “It feels so much better because I'm feeling the walls of the women, and they are more orgasmic.” He adds that he will soon be going for his third procedure with Dr. Loria to get even larger.

I'm more confident now, and because of that, I'm willing to try things I never dreamed of trying before.

Chris has always been insecure about his size, but the critical moment he knew surgery was necessary was in a heated argument, when a former girlfriend shouted, “Fuck you and your little penis!”

“I have the same erections and the same feeling during sex, the only thing that's changed is the size,” Chris says of his post-surgery penis, though he does admit, he now has to use KY Jelly with his wife and incorporate some more foreplay. Chris also cites a fascination with his new bulge and loves when others take a glance.

I feel like a king and try very hard, at times, not to beat my chest and yell out in a Tarzan call!

Since Chris' desired length is 6.5 inches by 7.5 inches, he's planning a fourth procedure.

Steve's primary reason for getting the surgery was to better please his wife and ultimately strengthen their relationship. Prior to this surgery, Steve admits he'd had other enhancement surgeries, where fat was transferred from one part of his body to the penis.

About his previous surgeries, Steve cites three issues: It was invasive, you had to be sedated, and it doesn't last. Over time, the fat assimilated back into his body.

However, after the surgery, Steve went from 5.7 inches in length and 6.1 inches in girth (well within the average) when erect to 6.25 inches long and 8.6 inches girth. “After the procedures, I ended up with a thicker, longer, heavier penis, none of which negatively affects me getting an erection.”

He adds that he's now better able to stimulate his partner, which has led to an increase in his own arousal.

“As for sensitivity, I was skeptical that I would lose some by having the procedure,” Steve begins, “but I did not.”

In fact, Steve felt that, if anything, his sensitivity has increased. “The increase in my girth not only provides greater pleasure for my partner, but has also increased her number of orgasms.”

Needless to say, Steve was very happy with the results. “When you feel 100 percent confident in your ability to please your partner, it makes the experience so much more enjoyable for you as a man, and that's the way I feel.”

It makes the experience so much more enjoyable for you as a man, and that's the way I feel.

Dr. Loria performed 700 of these procedures in 2015 and projects he will perform more than 900 in 2016. In other words, the procedure's popularity — and the lack of confidence men feel about their penis size — is on the rise.

“My theory is that just about all men feel inadequate down there, and they just want more size to feel comfortable with how they look naked in the flaccid state and in the erect state as well,” Loria says.

If we continue to fetishize penis size, men will continue to feel insecure. In cosmetic surgery, which was once almost exclusively utilized by females, with pressure to have bigger breasts, butts and flawless skin, surgeons have evidently begun to welcome male patients with inadequate dicks and thick wallets.