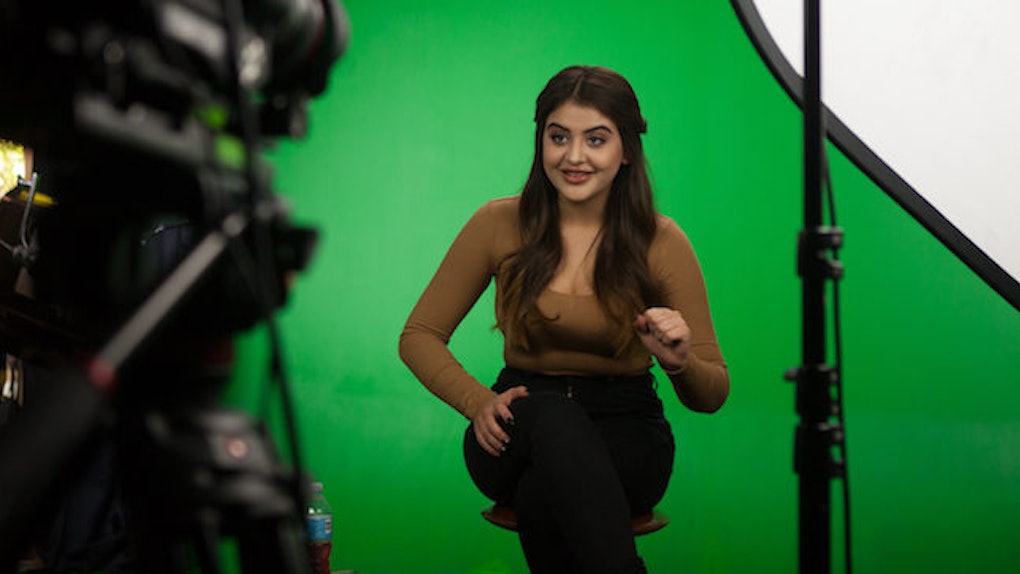 If this 19-year-old Vine super star, social media maven, recording artist, actress and outspoken feminist wasn't already making you feel shitty about how little you've done with your life, she certainly will now.

In a nutshell, "Lady Bits" is a raw, bold digital series in which Giraldo candidly discusses pressing issues, like slut-shaming, feminism, dating and body positivity in her uncensored, no-bullshit style.

Oh, how I wish there were cool girls like Giraldo when I was an adolescent getting slut-shamed for letting not one, but two boys feel me up in a month!

In fact, Giraldo's traumatic experience getting slut-shamed was a driving force of inspiration for her when creating "Lady Bits."

When I was younger, my naked photos were leaked. I didn't realize it at the time, but I was a minor, and it went viral — completely viral. And every single person that distributed it was disturbing child pornography. And yet, everyone in my family, in my school, in my work life — like, everybody — treated me so negatively. 'How could you do that?' And 'Oh my God, I can't believe you!' And funnily enough, I was working with a brand at the time on an anti-bullying campaign, and they dropped me from the campaign. Meanwhile, it was out my hands. It wasn't something I did wrong. It's just victim shaming.

She was also shamed after she chose to get her lips done:

I got my lips done, for an example, and I had to deal with [comments like] "You're insecure." And it's like, no, I'm not insecure. I just wanted to make a change in my body, and I did. I feel like women should be able to do whatever the fuck they want to their bodies and not have to be criticized or not have to give excuses or justify anything that they're doing.

Can I get a YAS QUEEN?

For so many years (like most of us girl creatures), Giraldo dealt with "so much bullshit." And she thought that was "just the way it was."

But fortunately, her experiences with shaming haven't made her shameful about her sexuality. She is a wildly sex-positive feminist.

I'm obsessed with how Giraldo's message is all about doing whatever the hell you want, which is the heartbeat of what sex-positive feminism is about: agency over your body.

As Giraldo grew up and discovered the power of her own voice, she felt compelled to let girls know they have the right to question all they've been told by society.

Most importantly, she wanted her message to resonate with the most at-risk demographic for shaming of all kinds: people her own age.

I think, in our culture, women are just treated so shitty when it comes to double standards and misogyny. So I wanted to do a show that would affect people — people my age. I've read a lot of feminist books, and I've seen a lot of cool feminist things, but I really wanted to resonate with people more along the lines of my age.

Giraldo is exactly right. There is a ton of amazing feminist, anti-slut-shaming content circulating on the internet, but it's usually created by women in their mid-20s. Teenagers don't have a particularly huge media platform when it comes to feminism.

And "Lady Bits" lends an important, feminist voice to that younger generation.

I'm obsessed with how Giraldo's message is all about doing whatever the hell you want, which is the heartbeat of what sex-positive feminism is about: agency over your body.

I feel like women should be able to do whatever the fuck they want to their bodies.

As a writer who understands how raw it can feel to talk about sex on the internet, I had to ask Giraldo if it was strange to share such intimate details of her life on "Lady Bits."

You can check out "Lady Bits" here (new episodes every Tuesday), and get tickets to the singer's upcoming shows here.