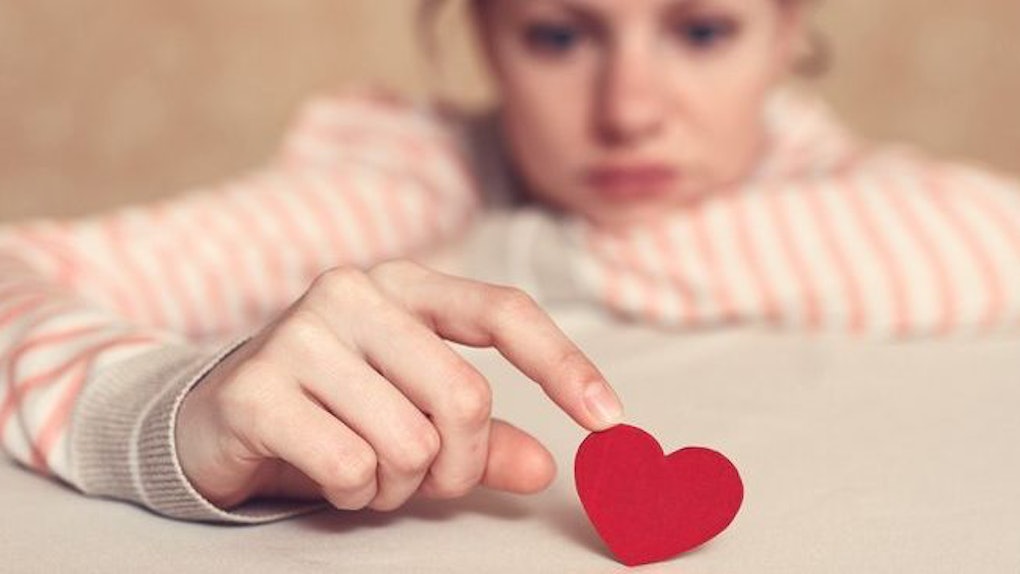 I once mustered up the courage to say "I love you" to a guy, and his response was a total buzzkill. He responded with silence, followed by a long chug from his beer, and threw in a nice, loud burp as a conclusion.

He didn't even semi-romantically burp "I love you, too" in the semi-talented fashion that some people burp out the ABCs. He didn't say anything back when I told him that I was extra smitten with him, which wasn't something I said on the reg. I reserved those three words for only a few, select people who made my heart feel like bubble wrap when they'd hug me hello.

The next morning, the beer-burper said: "Do you remember what you said to me last night?"

Listening to him say that made me feel pathetic. It made me feel like his response was half-hearted, out of desperation to make things not feel so awkward between us, and mostly said because he wanted to keep me close, without keeping me that close.

Here are the three lessons I learned after I said I love you to a person who very clearly didn't L-O-V-E me back.

Looking back on this situation, I can see that I overreacted a bit. I had known this guy for three months and had all these strange and strong feelings for him that I hadn't felt before for anyone else.

I was new at this falling in love game. As the girl who had been on more first dates than anyone else in her friend group, I didn't have much practice building intimacy with another person in my twenties. I had so many quick relationships that felt like they lasted for 30 days or less. Feeling things that were a few steps up from that perhaps made me rush into feeling like I was head over heels in love with this guy.

He, on the other hand, had been in a six-year relationship once, and he'd just gotten out of an eight-month relationship. Perhaps his feelings of love were more mature. Perhaps love, to him, was a deeper connection with a person that took longer than three months to form. Perhaps, to me, love was just an unusual feeling that I hadn't felt for anyone else, and only just that.

Love, I realized, wasn't something two people felt equally. Two people can feel it for each other, in different doses, at different times.

I had never been the one to say "I love you" first to anyone. A part of me wanted to admit to this guy that I loved him so that I could have the very vulnerable experience of saying that phrase to someone for the first time. I wanted to say it at the most romantic time possible, to maximize the dramatic effect, and perhaps have one of those picture-perfect moments that you ball your eyes out at when you watch a rom-com.

So, I waited until just seconds before the ball dropped on New Year's Eve, as we found a spot to stand in the back of a well-decorated East Village bar.

Grabbing his hand, I started to speak. But the music was far too loud; the screams of joy and excitement of the people around us forced me to talk way too loudly. The emotions of a new year and the phrase "I love you" were like a badly mixed cocktail that you spit out instead of swallowing.

Maybe my attempt at making the moment romantic and perfect made the moment just feel cliché, uninviting, and lame. Maybe he couldn't even process what I meant when I said those words because he was just trying to process a ton of other things at once.

3. Don't Ever Regret Saying "I Love You"

I didn't feel embarrassed when I confessed my love for him and he didn't say anything back. I felt empty. I felt upset.

But I wasn't mad at myself for doing it. I wanted to express my feelings to him, and even if it came out brash and overwhelming, it came out. I slept really good that night, even though the person I was sleeping next to was someone I now knew I wouldn't be sleeping next to for much longer. If I had held back on admitting my feelings to him, perhaps we'd date for another six months, and I'd sit and wait and wonder if he was feeling the same way about me. I don't regret what I said because it helped me not waste time with a person who was keeping me around just to keep me around.