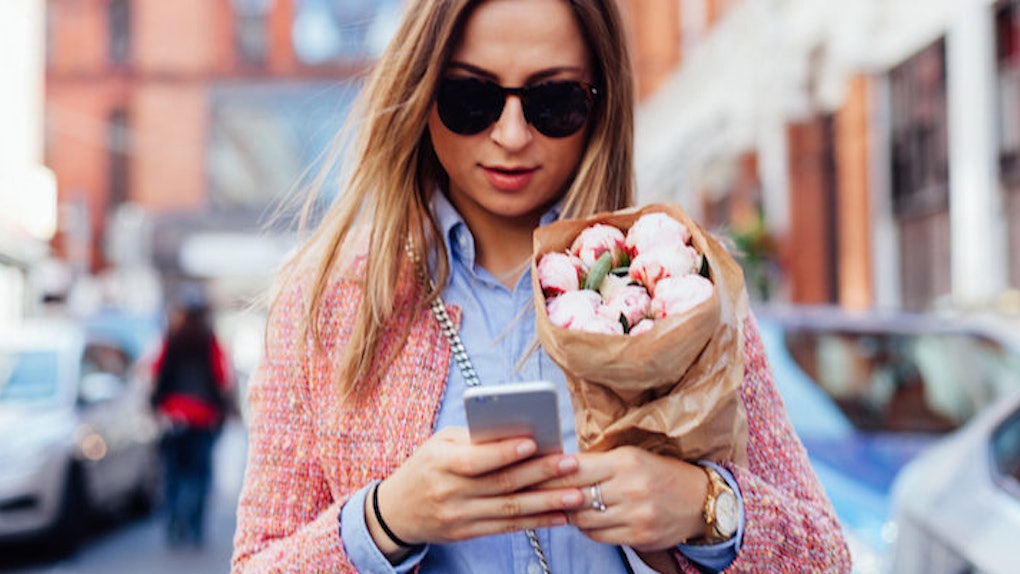 He Must Be Dead: 83 Totally Legitimate Reasons He's Not Texting Back

So you just sent him the best text ever created by (wo)man. And what do you get? CRICKETS.

But… you rock! There's no way he's actually ghosting you.

In fact, you convince yourself of precisely 84 TOTALLY LOGICAL reasons as to why he's not giving you a prompt reply.

1. He lost his phone, and now he's freaking out because he can't respond to me. Poor guy.

2. My text wasn't necessarily the type of text you HAVE to respond to.

4. He's probably hammered at a party or something.

5. He respects me too much, so he didn't want to text me while he's drunk.

6. He travels a lot for work; he probably had to get out of town last minute.

8. He's on the phone telling his mom about me right now.

9. He ran into his ex and freaked out because he didn't want her to see him texting the new love of his life.

10. He's trying to think of the PERFECT response.

12. He probably got so excited about my text he literally got a panic attack.

13. He knows our sex would be so mind-blowing, so he's trying not to actively derail his life.

17. He wants to see my face while we talk. He'll FaceTime me later.

22. He's busy moving stuff into the new apartment he got for our future family.

27. Maybe I came off too strong, and he's trying to cool things off a bit.

28. Jen's boyfriend didn't text her back after their first date, and now they've been dating for, like, five years, and he always texts back. He's probably just like Jen's boyfriend.

30. He's probably just intimidated by me.

32. Texting makes him miss me too much, and he can't be distracted with those emotions right now.

33. He probably left his phone at home today.

34. He's probably out with his friends.

35. He's too busy making money for our FUTURE together to respond to some trivial text.

37. OMG, he's probably jerking off while thinking about me. Creepy or flattering?

38. He's probably out rescuing orphans; he seemed like such a good guy.

39. He probably got kidnapped.

40. I waited an hour to respond to that text he sent me last weekend, and now he's giving me a taste of my own medicine.

41. Didn't he say he loved to cook? He's probably whipping me up something right now.

42. He's freaking out because I posted such a hot, intimidating picture of myself on Instagram, and now he doesn't know how to talk to me.

43. He's jealous because my ex liked the picture first.

45. He's in his hardest class right now, and he can't lose focus.

46. He could be drowning. I heard something on the news a few weeks ago about people drowning. That's the answer.

47. He's just a lone wolf. He loves his independence, and he's clearly conflicted by our pending relationship and his very obvious feelings for me.

48. He'd rather see me in person than text me so much.

49. He probably thinks I'm ignoring HIM (because my text obviously didn't go through).

51. He's working on a surprise date and is afraid to blow his cover.

52. He has Sprint, so he probably doesn't have service.

53. Wait, I have only three bars of service right now. He definitely didn't get it.

54. We're connected on a deep level that goes beyond texting. Hang on, let me use ESP to figure this one out.

55. He Instagrammed that picture with that other girl to make me so jealous that I want the text back even more. That's why.

57. He's probably still hurting from his ex who dumped him two years ago; he's scared I'm going to hurt him again.

59. Didn't he snap me a picture of his sister yesterday? She's probably in town.

60. They're probably getting lunch at this very moment and gabbing about how awesome I am.

61. He probably has food poisoning; it looks like he goes to a lot of underground restaurants (based on his Instagram, which I'm totally not stalking).

62. He's busy picking out an engagement ring for me.

63. I waited an hour to text him back, so he's probably just tripling that to follow the rule of threes.

64. He probably just doesn't want to appear desperate... I mean, he is REALLY into me.

65. He was working and didn't want to send me a one-word text. He's waiting until he can write me something really long and in-depth.

66. My text was so great that it literally left him speechless.

67. He is so confident that he doesn't NEED to text me all the time.

68. He's probably out doing bro things with his bros.

70. If we text too much, he's gonna get too attached. And he doesn't want to do that right now.

71. He's too busy showing off my Facebook pictures to all of his friends right now. OMG, bragging much?!

72. He probably thinks I'm less serious about this potential relationship than he is, and he wants time to think things through.

73. He probably can't find my name because he accidentally stored it as “Wifey.”

74. He's waiting to call me when he has some time to really talk.

76. Didn't he say he liked sports? He's probably playing one of those.

77. He probably doesn't check his phone when he's with other people. Aw, so polite!

78. He doesn't want to respond now so that when he texts me this weekend, it doesn't look like he double-texted.

81. He is probably literally rolling on the floor laughing at my hilarious text and can't get up to type a response.

82. He's probably busy completely breaking ties with all his exes now that he found "The One."