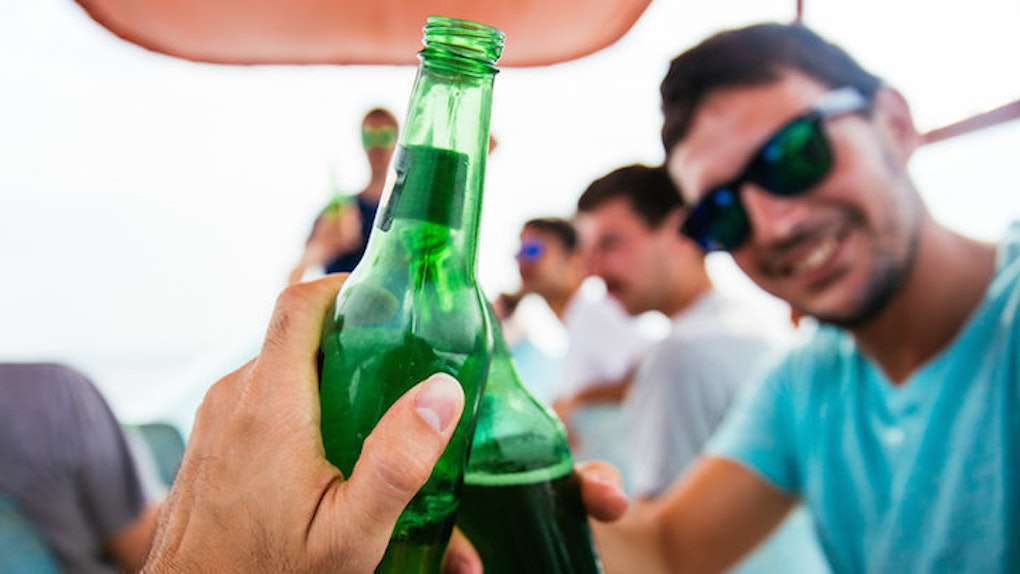 6 Legitimate Reasons You Should Date A Guy Who Drinks Beer

Beer is glorious. It's one of life's greatest gifts -- a truly remarkable substance.

There's nothing better than coming home at the end of a long day and grabbing a cold one out the fridge. When you take that first delicious sip, life instantly improves.

In the words of Frank the Tank from "Old School,"

Once it hits your lips, it's so good!

You can tell a lot about people based on what they prefer to drink -- it's a reflection of their approach to life.

And you know a guy whose go-to beverage is beer is someone who is down-to-earth and likes to take things slow.

He doesn't rush things but wants to savor every little moment of this crazy journey we call life -- one sip at a time, one day at a time.

He doesn't just drink to get drunk, but because he actually likes the taste of beer. He's got character and appreciates the little things.

He's uncomplicated, relaxed, sensible and a lot less likely to get obnoxiously inebriated and ruin your evening (liquor tends to do that). But that doesn't mean he doesn't like to have fun (he takes the occasional keg stand and is skilled in the art of beer pong). Beer drinkers just understand the importance of balance.

This is precisely why a dude who drinks beer is highly datable.

If you're not convinced yet, here are six legitimate reasons you should date a guy who drinks beer.

1. He won't die prematurely (always a plus).

Beer is delicious and nutritious.

If consumed in moderation, beer has a number of health benefits.

Beer is full of antioxidants and contains more selenium, B vitamins, phosphorus, folate and niacin than wine.

There's evidence beer is good for your heart. Italian researchers looked at the drinking habits of over 200,000 people and found those who drink beer in moderate amounts are 31 percent less likely to develop heart disease than non-drinkers.

Beer also has the potential to boost your immune system, strengthen your bones, improve your eyesight and prevent you from developing kidney stones.

If you date a guy who drinks beer, you can feel more confident he won't drop dead on you anytime soon, which is definitely a good thing (depending on the guy... just kidding... but seriously).

A beer a day keeps the doctor away.

The best part about beer is there are so many different types (approximately 400), and you can drink whatever you're in the mood for. With over 4,000 breweries in the US alone, we're living in the golden era of beer (it's a beautiful thing).

A guy who drinks beer appreciates variety and is always open to trying new things. If he walks into a bar and it's serving a beer he's never had before, he's definitely going to want to try it.

If you date a guy who drinks beer, his open-mindedness will make your time together more adventurous.

3. He can go anywhere in the world and be comfortable.

A guy who drinks beer is great to travel with because he's not too picky and doesn't take himself too seriously. He's a people person and unpretentious.

Traveling together is one of the best parts of being in a relationship, and you'll definitely have a fantastic and relaxing time with a beer-drinking dude.

4. He's a low-key proponent of equality.

Beer is often viewed as the drink of the "working man," but this is misleading. The truth is beer has a much stronger connection to women.

The oldest available record of beer brewing comes from ancient Egypt, where beer was produced and sold primarily by women. In fact, there was even a law that prevented men from making or selling beer.

In ancient Peru, beer-making was an extremely important task reserved for women of noble birth or extreme beauty. Simply put, if you were brewing beer in Peru at that time, you were considered to be among the most elite and noble females in society.

Ancient Sumerians even had a goddess of beer named Ninkasi.

Centuries later, in colonial America, women were both tavern-keepers and brewers. Making beer was one of their standard daily tasks.

Indeed, women have a relationship with beer that spans thousands of years, and they were the first to make and consume it in large quantities.

If a guy is a beer drinker, he has women to thank for its development and deliciousness. Historically, beer is essentially the most feminist drink there is.

In this sense, drinking beer is a promotion of equality, and we could definitely use a lot more of that.

Dating someone with intelligence is important: It keeps things interesting and ensures you always have something to talk about.

And it just so happens drinking beer is linked to increased cognitive functioning because of a flavonoid it contains called xanthohumol. So if your dude is a known to have a pint or two, he might also be a brainiac.

Beer and food are an exceptional combo. It's a drink that goes well with just about anything. And the more beer you drink, the hungrier you get.

If you're dating a guy who drinks beer, there's a high probability he loves food (you can find him making out with a slice of pizza at 3 am pretty much every Friday or Saturday night).

Chances are he also likes to cook (people who love food usually do), and he'll make you delicious grub on a regular basis.

If he's not cooking, he probably knows a million places where you can get amazing food. He's definitely someone you want around when you're starving and need a burrito in and around your mouth as soon as possible.

Beer, food and love make the world go 'round. Find a man who drinks beer, and eat everything together (keyword: everything).